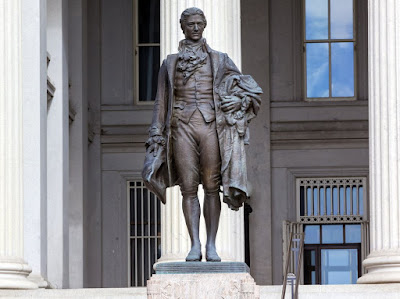 
Along with James Madison, Hamilton crafted the best operating system ever devised in human history.  The U.S. Constitution provided a framework for sharing power and resolving differences.  Madison and Hamilton provided details for operationalizing the Constitution with their Federal Papers essays.  These Papers remain integral to interpreting the original intent for court cases to this day.


America was blessed with George Washington, the most indispensable person in our nation’s history. However, Washington needed to augment his phenomenal leadership skills with Hamilton’s management acumen.  During the American Revolution, Hamilton translated Washington’s military strategy into clear and concise orders to his commanders.  Now as President, Washington needed Hamilton to translate the Founders’ vision, and his policies, into reality.


Hamilton’s love of administrative detail was matched by his devotion to commerce.


He was the only “modern man” among the Founders.  Hamilton grew-up outside the American colonies and had a full appreciation of how nations interacted.  As an accounting clerk for various trading companies in the West Indies, Hamilton developed a deep understanding for the inner workings of international trade and finance.  His was America’s first “capitalist”.  The systems and institutions he put in place laid the foundation for America becoming the greatest economic power in the world.


Hamilton greatest achievement was managing the onerous debts arising from the Revolutionary War.  Each state incurred debt as their individual state militias needed to be paid for back wages.  Both national and state level soldiers were paid in bonds or “IOUs”.  After the war many cash-strapped soldiers sold these bonds/“IOUs” to speculators for a fraction of their worth.  Countless suppliers of their armed forces sued for nonpayment.  The paper currency issued during the war was “not worth a Continental” and legions of war veterans, farmers, merchants, and craftsman (like blacksmiths, barrel makers, and carpenters) demanded payment, declaring Continental script were “IOUs”.


The total debt was $79 million: $54 million owed by the national government and $25 million owed by the states.  Hamilton saw repayment of this debt as a strategic and moral imperative: “States, like individuals, who observe their engagements are respected and trusted, while the reverse is the fate of those who pursue an opposite conduct.”


Without a debt repayment strategy, the IOUs and lawsuits would continue to cripple America’s economy with unbridled speculation and uncertainty. Trust in the Federal government’s ability to meet its obligations had to be restored.  Something had to be done.  Hamilton declared, “In nothing are appearances of greater moment than in whatever regards credit.”


Repayment of debts would allow America to enter into international agreements and borrow funds for investing in business ventures and stimulate economic growth.  Hamilton observed that the American economy was stagnating from a limited money supply, deflation of land values, and no liquid capital. He also was concerned that if America was seen as financially broke and politically fragmented, foreign governments may lure individual states with separate debt financing arrangements.


The solution was to consolidate all public debt and set aside some of the steady federal revenue to service interest and payoff the principal.  These were revolutionary and futuristic concepts in 1790.

It was his conviction that, “an assumption of the debts of particular states by the union and a like provision for them as for those of the union will be a measure of sound policy and substantial justice.”


Hamilton determined that consolidating all the Revolutionary War debt would accomplish several things.  [1] It would bring order from chaos with one large debt instead of thousands of smaller ones.  [2] It would simplify the management and repayment of the debt. [3] It would establish loyalty among the creditors and bond/IOU holders who would promote the stability and success of the federal government to assure their claims were paid.


Another aspect of Hamilton’s solution was that the U.S. Constitution gave the federal government the exclusive right to collect import duties.  The Federal Government assuming state debt would prevent states from trying to return to the Article of Confederation when states levied duties on interstate commerce.  Hamilton wanted to unify America and forge a national economy.


The critical element in assuming all debt was to have a unified America attract foreign investment through issuing federal government bonds.  Such bonded debt would create investment partners who would forge trade relationships that allowed the U.S. Government to raise the necessary revenue to meet its debt obligations.  Hamilton sought to create a web of economic loyalties and relationships that bound everyone to supporting everyone’s economic wellbeing.  In doing so, Hamilton would establish America as a major player in the modern international financial system.


Hamilton’s vision and how to implement it, was at the core of his fifty-one-page “Report on Public Credit” to the Congress.  It was his hope that Congress would pass the necessary legislation to authorize implementation of this integrated plan.  Any editions or subtractions would ruin his delicate balance between the various economic interests.  Hamilton worried, “Credit is the entire thing. Every part of it has the nicest sympathy with every other part.  Wound one limb and the whole tree shrinks and decays.”


Many in Congress rejected the plan as confusing and overly complex.  Some saw it as too much like the way England financed its wars.  Other declared it a bailout for speculators.  Even Madison refuted it.  As the assumption plan related to spending, its first test was in the House of Representatives.


The House debate was a sensation.  Packed galleries watched Madison rail against the plan as a “betrayal of the American Revolution”.  Hamilton, a member of the Executive Branch, mustered his votes behind the scenes. On April 12, 1790, the House defeated the debt assumption plan: 29 ayes to 31 nays.


The death of debt assumption found resurrection in the future location of the nation’s capital.  Hamilton and northerners wanted the capital to remain in New York or return to Philadelphia.  Southerners wanted in in the South and located outside an existing urban area.  Jefferson saw this as a struggle between his vision of an agrarian nation versus the grime of industry.  Madison and Henry Lee had purchased land along the Potomac River in the hopes that Jefferson would prevail.

All sides wanted a final decision on the future of the Nation’s Capital, and symbolically the character of the nation.  To break the stalemate, the key players, Jefferson, Hamilton, Madison, and several others gathered for dinner on June 20, 1790, at Jefferson’s townhouse in New York City.


After much food, libations, and discussion a deal was struck.  The Nation’s Capital would be along the banks of the Potomac between Georgetown in Maryland and Alexandria in Virginia.  In exchange for Hamilton convincing northerners to support this location, Jefferson and Madison would support passage of Hamilton’s Debt Assumption plan.


On July 10, 1790 the House passed the Residence Act moving the temporary Capital back to Philadelphia and designating a ten-square mile area along the Potomac as the permanent Capital.  The House then passed the Assumption bill on July 26.  The Senate approved the plan on August 4, 1790.


“The fabled birth of Minerva from the brain of Jove was hardly more sudden or perfect than the financial system of the United States as it burst forth from the conception of Alexander Hamilton.”

Posted by Scot Faulkner at 8:49 PM