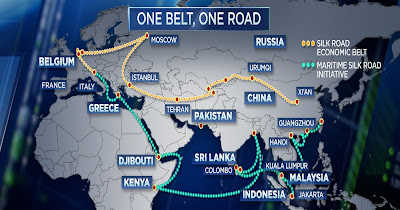 While U.S. politicians and the media are mud wrestling over the 2016 and 2020 elections China is resetting the global chess board.

China’s President Xi JinPing was just in Paris for the Global Governance Forum.  He assured European leaders that his Belt and Road Initiative (BRI) is a universal good and poses no threat to the West.

China launched the BRI in 2013 as a massive infrastructure project establishing the ancient Silk Road as the epicenter of 21st Century transport and trade.  China has recruited 125 nations to participate and pledged $150 billion a year to make it a reality.

China is methodically implementing an aggressive and comprehensive strategy to become the world’s dominate economic power by 2050.  In 2018, the 19th Chinese Communist Party (CCP) Congress openly espoused this goal.

During the Cold War the U.S. and the U.S.S.R. globally competed for strategic resources and control of sea routes.  The Soviets were driven by a Communist world view to forcibly take over the world and crush Western Democracy and freedom.  Soviet military and intelligence assets toppled governments, supported insurgencies, and undermined Western resolve.

Both East and West framed much of their efforts as economic reform or development.  The communists destroyed whole populations with murder and starvation.  The West killed with kindness.  Liberal academicians, instead of business people, ran development agencies that spent trillions on poorly conceived and implemented projects.  The Developing World is littered with empty buildings, rusting tractors, and environmentally damaged landscapes.

Is it any wonder that China’s approach is making headway?

Starting in 2000, China began pouring money into highly targeted projects in Africa.  They either directly built and ran the project or offered enticing loans.

The direct approach was for China to takeover a natural resource, such as a mine, take over the port for shipping the resource, and building rail and road links between them.  Chinese workers run everything.  There is no effort to employ or engage “host county nationals” (HNCs).  One by one, China has solidified control over strategic mineral resources and ports throughout Africa.

The most recent DTD vestige is China gaining control of the Kenyan port of Mombasa.


Mombasa is the third largest port in Africa.  China’s long-term power play started with loaning the Kenya government funds to develop the Standard Gauge Railway (SGR). The SGR links to the new Inland Container Depot in Nairobi, which receives, and dispatches, freight hauled on the new cargo trains from Mombasa.  Earlier this year, China called in its loan, which it knew Kenya could not afford. In one act, China now owns a key port on the Indian Ocean and its supportive infrastructure.
The Mombasa seizure follows other China DTD activities.  In December 2017, the Sri Lankan government lost the port of Hambantota to China, for a lease period of 99 years.  This happened after failing to repay billions of dollars in loans.

China remains unchallenged on making its 2050 vision a reality.

This is because the United States has no idea what it should be doing in the world.

Starting with the Spanish-American War, America had a very clear idea of its role in the world.  John Philip Sousa’s composed his famous “Stars and Stripes Forever” to honor Admiral Dewey’s victory against the Spanish fleet in Manila Bay.  It embodied the patriotic fervor that would propel America for the next ninety-four years.

Theodore Roosevelt earned a Nobel Peace Prize for settling the Russo-Japanese War.  “The Yanks are Coming” heralded America’s entry into World War I.  On December 29, 1940, Franklin Roosevelt declared the U.S. the “arsenal of democracy” to help stem the tide of tyranny and lead to winning World War II.  Ronald Reagan described the U.S. as the “shining city on the hill” to serve as a beacon of hope, inspiring millions to topple the Soviet Empire.

America has had no actionable global strategy since the Berlin Wall fell.

China has filled the void.

Posted by Scot Faulkner at 7:53 PM

Matthew 16 [1] The Pharisees also with the Sadducees came, and tempting desired him that he would shew them a sign from heaven.

Revelation 15 [1] And I saw another sign in heaven, great and marvellous, seven angels having the seven last plagues; for in them is filled up the wrath of God.