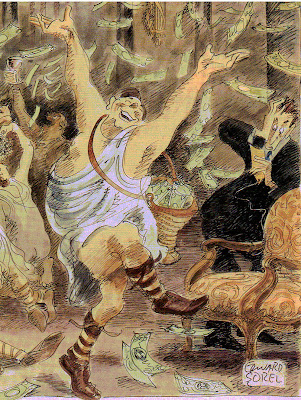 This column was published in Politico
http://www.politico.com/story/2013/08/the-summer-budget-bacchanal-95811.html?hp=r13

While most people are enjoying vacations, government agencies and their contractors are spending your tax dollars faster than ever.

That’s right — it’s peak shopping season for the U.S. federal government. Despite automatic budget cuts known as “sequestration,” the fourth quarter of the fiscal year remains the time for Uncle Sam’s annual spending spree. Why is that? Because over the course of July, August and September, agencies must spend the balance of their fiscal year budgets or suffer having their requests for budget increases being second-guessed by the Office of Management and Budget and the appropriating committees in Congress.

Each year, on average, executive branch departments and agencies spend only two-thirds of their discretionary money by June 30, the end of the third fiscal quarter. By the fourth quarter, there’s pent-up demand and a rush to spend. One-third of government spending typically happens in the fourth quarter. (In fiscal 2011, the peak was less dramatic. At the start of the fourth quarter, the federal procurement system had spent approximately 70 percent of its contracting dollars.)

The OMB provides program-specific fund tracking to federal executives around mid-July on what is left to spend. Agency officials view this OMB tracking report on “use or lose” spending as the “starting gun” for wanton expenditures of dubious value.

The government’s contractor accounting system, Deltek, also sends out fourth-quarter program and agency-specific opportunities to the vendor community. Government contractors, with long-term service arrangements, known as Indefinite Delivery, Indefinite Quantity, make beelines to their agency contracting officers to discuss immediate ramping up of expenditures. It is one of the dirty little secrets of how Washington really operates.

This year, some private firms started the fourth-quarter spending promotion in June, conducting business outreach sessions. One of their fliers heralds, “Once again federal spending has been delayed until the 4th quarter” and asks, “Do the agency people know you and your company?”

The flier [http://govconectx.com/June_13_Outreach.html] provides a list of participating agencies, “with more being added every day!” In this season of accelerated spending, there is something for everybody, except American taxpayers.

Imagine if Washington’s incentives mirrored the real world, where saving money still means something. Imagine if Congress passed a fourth-quarter spending restriction that mandated agencies spend only 25 percent of their budget in the fourth quarter.

To calculate the potential savings, let’s use the 33 percent average in fourth-quarter spending occurring across the executive branch. The 8 percent difference would save $104.8 billion in the next three months.

That amount in savings is larger than the $71.4 billion sequestration cuts for FY 2013. The key difference is that, instead of draconian across-the-board cuts, this amount is fully focused on last-minute arbitrary spending. These last-minute buys are for things agencies have lived without for the entire fiscal year. This is not spending to keep our military planes flying or national parks open; it’s money spent on optional conferences and nonessential services. The GSA and IRS conferences that attracted so much recent concern were part of previous year-end spending bonanzas.

Such waste provides another reason to curtail this long-standing budget bacchanal. Agency officials will scream, while American taxpayers will breathe a sigh of relief.

Scot Faulkner is former chief administrative officer of the U.S. House of Representatives.
Posted by Scot Faulkner at 10:55 AM