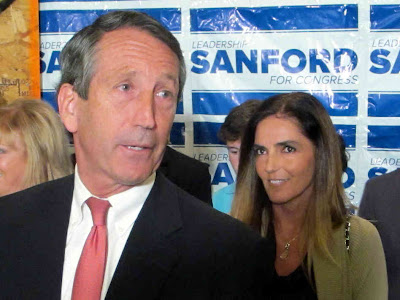 What happens when a Republican candidate is damaged goods? This is the dilemma facing Republicans in the May 7 special election for South Carolina’s 1stCongressional District. The Republican leaning district should have attracted top tier candidates, but after the primary and run off voters are confronted with the ghost of scandals past – former Governor and Representative Mark Sanford.

This is the last thing Republicans needed. Sanford clearly has moral issues; otherwise he would still be married to his first wife and mother to his four children. He is not ethical, otherwise he would not have lied to everyone about his affair, diverted state funds for personal use, and been censured by a 102-11 vote by the South Carolina House of Representatives. His intelligence is questionable, given everything he did to self-immolate in 2009.

Until his fantasy trip on the Appalachian Trail, which to the surprise of everyone extended all the way to Buenos Aires, Sanford was a respected fiscal conservative. Sanford was even making motions towards a presidential run in 2012. What do you do when someone you may agree with on key issues makes your skin crawl?

How could such damaged goods occur in the wake of Republicans launching their strategic rebranding? Before the GOP collapsed into an incestuous echo chamber, there was a conservative intellectual tradition centered on the ancient concept of “Ethos”. This dates to the dawn of Western Civilization and concerns right and wrong choices. Ethics is about choice. Mark Sanford and the current Republican Party is a sad collection of wrong choices.

Some Republican pundits are going through Olympic style gymnastics to justify their support of Sanford. Conservative Talk Radio and Fox News are proclaiming that Sanford’s zipper problem is very different from President Bill Clinton’s zipper problem. They are asserting that one warrants eternal ostracism while the other merits forgiveness. Ironically, in December 1998, Rep. Sanford supported the resignation of adulterous Speaker-wannabe Rep. Bob Livingston, stating, "The bottom line is that he lied under a different oath - the oath to his wife."

Sanford and Clinton are just two in a long line of politicians who are motivated by something other than their heart and mind. The list is wonderfully bi-partisan. Here is the parade of shame from just the last two years: Chris Lee (R-NY), Eric Massa (D-NY), Mark Souder (R-IN), Anthony Weiner (D-NY), and David Wu (D-OR). Mercenary cable news use adultery as a ratings boon during the scandal and then profit on the residuals. Fox hired Sanford as a paid commentator, while CNN and Current TV hired disgraced Governor Elliott Spitzer as a host. This is the antithesis of ethical public behavior. Rome's pre-eminent political thinker, Cicero, defined this as “A good man speaking well”. Cashing-in on the scandal parade is neither.

Partisan acolytes for both sides have had to respond to these sex scandals by biting their tongues and finding ways to overcome sordid details and photos. It would be refreshing to hear just one of them simply say, “Okay, he’s an immoral a##hole, but we need his vote”.

The changing world of mass social media and “Oprah-style” confessionals has altered our politics for the worse. Thankfully, there is still such a thing as indignation, founded on essentially conservative ethical principles.

We have a test case for ethics in this Special Congressional election, which may be overshadowed by the basics of power politics. Republicans want to hold onto every Congressional seat, and deprive Democrats of anything that builds momentum for the November 2014 showdown. However, losing this special election may help Republicans achieve their long term objective to reinvent and reposition themselves for 2014 and 2016. Unfortunately, a Sanford victory sets-up the embarrassing tableau of Speaker Boehner swearing him in while former mistress, Maria Belen Chapur, holds the bible. Sanford would then go on to upstage Floor debates, committee meetings, fundraisers, and rallies.

Republicans clearly are wrestling with a major dilemma - whether the short term hunger for power trumps long term reasoning. Speaker Boehner endorsed Sanford, while the National Republican Congressional Committee has decided not to spend any more money on Sanford’s behalf ahead of the May 7 special election.

These observations come from the different perspectives of the two authors. We both agree that Sanford’s re-insertion into politics offends us both. It is a dilution of serious, ethical, political debate.

Posted by Scot Faulkner at 6:19 PM