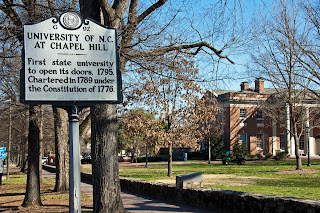 Gov. Pat McCrory has made news with his recent comments on conservative talk radio, attacking liberal arts education in general and UNC-Chapel Hill in particular. In doing this, he has lit the fires of progressive academics and riled up the Fox News tea party base. With the governor’s star rising in the GOP, his comments no doubt were strategic.

They also represent a total betrayal of conservative principle.

The meltdown of the conservative movement in recent years has many causes, including an addiction to the media echo chambers of the blogosphere, talk radio and Fox News. Anti-intellectualism is another part of this new, destructive ideology. A spokesperson for this anti-intellectualism was, of course, Sarah Palin, who famously could not identify what newspapers she read. To be conservative means not reading newspapers?

Not so. As a political philosophy, conservatism is grounded in intellectual thought and deliberation. The governor’s statements about education are therefore not only counterproductive but also anti-conservative.

Ironically, the notion of colleges and universities as factories for job-performance smacks much more of leftist, socialist societies where individuals were not valued for their knowledge or perception but for their ability to perform tasks. As a philosophy, conservatism has in fact battled this idea for hundreds of years. The governor is apparently not familiar with this history. Perhaps his education was not liberal enough.

Is it not practical, in preparation for entering the workforce, to have read deeply in philosophy, cultural history, politics and literature? Those 3 a.m. debates with college roommates about these ideas produce individuals better able to obtain rewarding positions in the ever-more competitive global marketplace.

The point of a liberal arts education is to make those debates possible, to give young students a broad-based knowledge that allows them to think about matters widely and deeply, to form their own opinions and find their place in society. Only an environment that teaches the value of knowledge, not just “information,” will allow them to decide what path they wish to take and what identity to choose: liberal or conservative. Choices cannot be made without perspective.

We are proof positive. We benefited from superb liberal arts educations, one at the University of Virginia, the other at Lawrence University. In both cases, we were able to explore wide-ranging topics and were required to read deeply in topics we knew little about and have little involvement with now (from geology to astronomy). We were taught to think about matters that had little to do with the careers we would map for ourselves and to consider ourselves better for it. We also would like to think we have given back, as educators, political activists and private sector businesspeople.

We find ourselves voting for different parties, but we share a deep admiration for the conservative movement and its heritage. Not just in recent times, when intellectuals like William F. Buckley Jr. forged the coalition that produced a revolution under Ronald Reagan, but in history dating to our founders Madison, Adams and Jefferson, and tracking from there to Burke, Montesquieu and even Plato.

Would the governor have students in North Carolina schools reading technical manuals rather than these thinkers, not to mention contrarians from schools of Marxism and postmodern deconstructionists? Young conservatives need to understand the ideas they might oppose.

Turning colleges into trade schools is counterproductive as well as anti-conservative. If there is to be a revival of conservatism, which is today moribund at best, it will happen only if an educated new generation can converse with its opponents in well-informed terms.

Technocratic specialization is the enemy of democracy, which asks us to have a wide lens – a “liberal” view not sequestered within our own limited perspectives. Conservatism, properly understood, asks us to engage, not disengage.

That is the purpose of a liberal education.

Sadly, our hypermediated age leads us to place too much attention on superficial labels. Identities are formed by talking points, not principle. Leaders on the left and the right flock to media outlets whose viewers already agree with 99 percent of the “news” they are delivered. The governor is playing to that crowd.

Conservatism is grounded in a very different heritage. Democracy was founded on the principles of rhetoric – reasoned debate and exchange among citizens. This cannot occur if we eliminate liberal arts education in our public schools.

North Carolina has a proud history of supporting broad-based liberal arts education, thanks in large part to the leadership of a popular Democratic governor, Jim Hunt, who eschewed partisan politics in favor of consensus. Hunt understood that economic growth depends upon broad education, and the job growth in the Triangle is testament to this strategy.

Conservatism is in freefall. We have no successors to William F. Buckley Jr. in our midst. We will be able to nurture new conservative thinkers only if we teach our young people about the intellectual legacy that produced intellectual leaders like him.