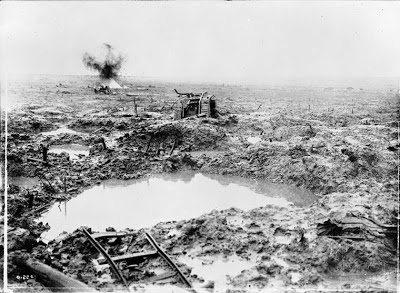 To understand the current deadlock on the Fiscal Cliff one should read Barbara Tuchman’s masterpiece “The Guns of August”.

In “The Guns of August” Tuchman vividly describes how institutionalized bias and determinism led to an avoidable world war and unnecessary carnage.  Her work offers lessons for the current political combatants, who are spending their time digging deeper trenches rather than finding common ground.

The Republican world view –
Republicans assumed that they would be welcoming the incoming Romney Administration and a new Republican majority in the U.S. Senate.  From this vantage point spending and taxes would be cut and entitlements would be reformed.  How they were going to get past January 1, 2013 to the promised land of the Romney era on January 20, 2013 was never discussed.  How the voters were supposed to support a new Republican era based upon no details was also left off the table.  What details there were included a tepid embrace of the “Ryan Plan”, cherry picking of the Bowles Simpson plan, some partisan swipes at Public Broadcasting, an overall sense that the current tax code was just fine as is, and an unwavering belief that there is not one penny of waste or inefficiency in the Defense Department.

Was it possible that Congressional Republicans hoped that anti-Obama barrages from the movie “2016”, Fox News, and conservative talk radio would get them over the finish line?  How would they have sorted things out had victory been theirs?

The Democratic world view –
Democrats assumed that Obama would win by a landslide allowing them to retake the House of Representatives and surge to 60+ seats in the Senate.  They assumed Republicans would be so shell-shocked by their overwhelming defeat that there would be no effective opposition to whatever the Democrats wanted to do.  The Democrats firmly believe that the main problem with the federal government is that it does not have enough money.  They also believe that the tax code’s main deficiency is that it does not take enough money from people making over $250,000.  Coupled with this is a fundamental orthodoxy that the federal government is a well oiled efficient machine that only wastes money in the Defense Department, that the fiscal cliff is only real when discussing revenue, and that the economic and moral future of depends on expanding government’s role.

Just like the English, French, Germans, and Russians in the years leading to World War I, the opposing political forces in , assume their facts are facts no matter the real facts. They also assume that the tactics they have used over the previous decades are sufficient to help them prevail in changing circumstances.  The devastation of August 1914 proved the madness of the political and military leadership among the great powers.  The gridlock and impending chaos of December 2012 is now proving the undoing of the political parties and eliminating the last shred of trust Americans hold for their elected officials.

The Mayan Calendar predicts the end of their 13th b'ak'tun on December 21, 2012.  ’s fiscal cliff calendar runs out on midnight December 31, 2012.  Only time will tell which date denotes the end of an era.
Posted by Scot Faulkner at 6:00 PM