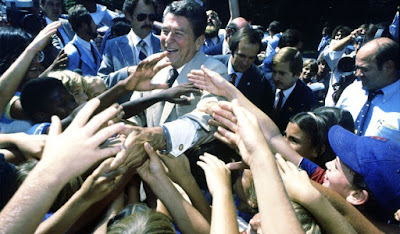 The election of Ronald Reagan on November 4, 1980 was one of the two most important elections of the 20th Century.  It was a revolution in every way.

In 1932, Franklin Roosevelt (FDR) decisively defeated one term incumbent Herbert Hoover by 472-59 Electoral votes.  His election ushered in the era of aggressive liberalism, expanding the size of government, and establishing diplomatic relations with the Soviet Union.  Roosevelt’s inner circle, his “brain trust”, were dedicated leftists, several of whom conferred with Lenin and Stalin on policy issues prior to 1932.

In 1980, Ronald Reagan decisively defeated one term incumbent Jimmy Carter by 489-49 Electoral votes.  His election ended the liberal era, shrunk the size of government, and rebuilt America’s military, diplomatic, economic, and intelligence capabilities.  America reestablished its leadership in the world, ending the Soviet Empire, and the Soviet Union itself.

Reagan was a key leader in creating and promoting the conservative movement, whose policy and political operatives populated and guided his administration.  He was a true “thought leader” who defined American conservatism in the late 20th Century.  Through his writings, speeches, and radio program, Reagan laid the groundwork, and shaped the mandate, for one of the most impactful Presidencies in American history.

The road from Roosevelt’s “New Deal” to Reagan’s Revolution began in 1940.

FDR, at the height of his popularity, choose to run for an unprecedented third term.  Roosevelt steered ever more leftward, selecting Henry Wallace as his running mate.  Wallace would run as a socialist under the Progressive Party banner in 1948.  Republican Wendell Willkie was the first private sector businessman to become a major party’s nominee.  Willkie had mounted numerous legal challenges to Roosevelt’s regulatory overreach. While losing, Willkie’s legacy inspired a generation of economists and activists to unite against big government.

As the allied victory in World War II became inevitable, the Willkie activists, along with leading conservative economists from across the globe, established policy organizations (“think tanks”) and publications to formulate and communicate an alternative to Roosevelt’s New Deal.

Human Events, the premiere conservative newspaper began publishing in 1944. The Foundation for Economic Education was founded in 1946.

In 1947, conservative “free market”, anti-regulatory economists met at the Mont Pelerin resort at the base of Mont Perelin near Montreaux, Switzerland. The greatest conservative minds of the 20th Century, including Friedrich Hayek, Ludwig von Mises, and Milton Friedman, organized the “Mont Perelin Society” to counter the globalist economic policies arising from the Bretton Woods Conference.  The Bretton Woods economists had met at the Hotel Washington, at the base of Mount Washington in New Hampshire, to launch the World Bank and International Monetary Fund.

Conservative writer and thinker, William F. Buckley Jr. founded National Review on November 19, 1955.   His publication, more than any other, would serve to define, refine and consolidate the modern Conservative Movement.
The most fundamental change was realigning conservatism with the international fight against the Soviet Union, which was leading global Communist expansion. Up until this period, American conservatives tended to be isolationist.  National Review’s array of columnists developed “Fusionism”, which provided the intellectual justification of conservatives being for limited government at home while aggressively fighting Communism abroad.  In 1958, the American Security Council was formed to focus the efforts of conservative national security experts on confronting the Soviets.

The policy victories of Goldwater and Buckley inspired the formation of the Young Americans for Freedom, the major conservative youth movement.  Meeting at Buckley’s home in Sharon, Connecticut on September 11, 1960, the YAF manifesto became the Fusionist Canon. The conservative movement added additional policy centers, such as the Hudson Institute, founded on July 20, 1961.

Goldwater’s campaign was a historic departure from traditional Republican politics.  His plain-spoken assertion of limited government and aggressive action against the Soviets inspired many, but scared many more.  Kennedy’s assassination had catapulted Vice President Lyndon Johnson into the Presidency.  LBJ had a vision of an even larger Federal Government, designed to mold urban minorities into perpetually being beholding to Democrat politicians.  Goldwater’s alternative vision was trounced on election day, but the seeds for Reagan’s Conservative Revolution were sown.

Reagan was unique in American politics.  He was a pioneer in radio broadcasting and television.  His movie career made him famous and wealthy.  His tenure as President of the Screen Actors Guild thrust him into the headlines as Hollywood confronted domestic communism.

Reagan’s pivot to politics began when General Electric hired him to host their popular television show, General Electric Theater. His contract included touring GE plants to speak about patriotism, free market economics, and anti-communism. His new life within corporate American introduced him to a circle of conservative businessmen who would become known as his “Kitchen Cabinet”.

The Goldwater campaign reached out to Reagan to speak on behalf of their candidate on a television special during the last week of the campaign.  On October 27, 1964, Reagan drew upon his GE speeches to deliver “A Time for Choosing”.  His inspiring address became a political classic, which included lines that would become the core of “Reaganism”:

“The Founding Fathers knew a government can't control the economy without controlling people. And they knew when a government sets out to do that, it must use force and coercion to achieve its purpose. So, we have come to a time for choosing ... You and I are told we must choose between a left or right, but I suggest there is no such thing as a left or right. There is only an up or down. Up to man's age-old dream—the maximum of individual freedom consistent with order—or down to the ant heap of totalitarianism.”

The Washington Post declared Reagan’s “Time for Choosing”: "the most successful national political debut since William Jennings Bryan electrified the 1896 Democratic convention with his Cross of Gold speech."  It immediately established Reagan as the heir to Goldwater’s movement.

The promise of Reagan fulfilling the Fusionist vision of Goldwater, Buckley, and a growing conservative movement inspired the formation of additional groups, such as the American Conservative Union in December 1964.

In 1966, Reagan trounced two-term Democrat incumbent Pat Brown to become Governor of California, winning by 57.5 percent.  Reagan’s two terms became the epicenter of successful conservative domestic policy attracting top policy and political operatives who would serve him throughout his Presidency.

Retiring after two terms, Reagan devoted fulltime to being the voice, brain, and face of the Conservative Movement.  This included a radio show that was followed by over 30 million listeners.

In 1976. the ineffectual moderate Republicanism of President Gerald Ford led Reagan to mount a challenge.  Reagan came close to the unprecedented unseating of his Party’s incumbent.  His concession speech on the last night of the Republican National Convention became another political classic.  It launched his successful march to the White House.

Reagan’s 1980 campaign was now aided by a more organized, broad, and capable Conservative Movement. Reagan’s “California Reaganites” were linked to Washington, DC-based “Fusionists”, and conservative grassroots activists who were embedded in Republican Party units across America. The Heritage Foundation had become a major conservative policy center on February 16, 1973.  A new hub for conservative activists, The Conservative Caucus, came into existence in 1974.

Starting in 1978, Reagan’s inner circle, including his “Kitchen Cabinet”, worked seamlessly with this vast network of conservative groups: The Heritage Foundation, Kingston, Stanton, Library Court, Chesapeake Society, Monday Club, Conservative Caucus, American Legislative Exchange Council, Committee for the Survival of a Free Congress, the Eagle Forum, and many others.   They formed a unified and potent political movement that overwhelmed Republican moderates to win the nomination and then buried Jimmy Carter and the Democrat Party in November 1980.

After his landslide victory, which also swept in the first Republican Senate majority since 1956, Reaganites and Fusionists placed key operatives into Reagan’s transition.  They identified over 17,000 positions that affected Executive Branch operations.  A separate team identified the key positions in each cabinet department and major agency that had to be under Reagan’s control in the first weeks of his presidency.

Reagan went onto to lead one of the most successful Presidencies in American history. His vision of a “shining city on the hill” continues to inspire people around the world to seek better lives through freedom, open societies, and economic liberty.

Posted by Scot Faulkner at 1:38 PM