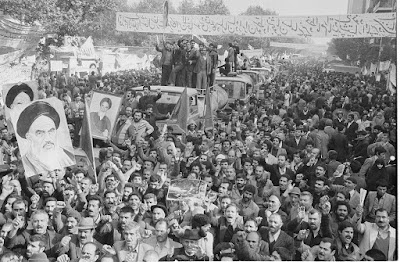 The long tragic road to the September 11, 2001 terror attacks began with President Jimmy Carter, and his administration’s, involvement in the Iranian Revolution, and their fundamentally weak response to the Iranian Hostage Crisis.

The Iranian Hostage Crisis was the most visible act of the Iranian Revolution.  Starting on November 4, 1979, and lasting for 444 days, 52 Americans were imprisoned in brutal conditions.  The world watched as the Carter Administration repeatedly failed to free the hostages, both through bumbling diplomacy and the rescue attempt fiasco.

The result was the crippling of U.S. influence throughout the Middle East and the spawning of radical Islamic movements that terrorize the world to this day.

Islam’s three major sects, Sunni, Shiite, and Sufi, all harbor the seeds of violence and hatred.  In 1881 a Sufi mystic ignited the Mahdi Revolt in the Sudan leading to eighteen years of death and misery throughout the upper Nile.  During World War II, the Sunni Grand Mufti of Jerusalem befriended Hitler and helped Heinrich Himmler form Islamic Stormtrooper units to kill Jews in the Balkans.

“If the form of government willed by Islam were to come into being, none of the governments now existing in the world would be able to resist it; they would all capitulate.”

Islamic dominance became an end in and of itself.

This did not have to happen at all.

Iran has been a pivotal regional player for 2,500 years.  The Persian Empire was the bane of ancient Greece.  As the Greek Empire withered, Persia, later Iran, remained a political, economic, and cultural force. This is why their 1979 Revolution and subsequent confrontation with the U.S. inspired radicals throughout the Islamic world to become the Taliban, ISIS and other terrorists of today.

“The Shah” as he became know globally, was reform minded.  He launched his “White Revolution” to build a modern, pro-West, pro-capitalist Iran in 1963.  The Shah’s “Revolution” built the region’s largest middle class, and broke centuries of tradition by enfranchising women.  It was opposed by many traditional powers, including fundamentalist Islamic leaders like the Ayatollah Ruhollah Khomeini.  Khomeini’s agitation for violent opposition to the Shah’s reforms led to his arrest and exile.
Throughout his reign, the Shah was vexed by radical Islamic and communist agitation. His secret police brutally suppressed fringe dissidents.  This balancing act between western reforms and control worked well, with a trend towards more reforms as the Shah aged.  The Shah enjoyed warm relationships with American Presidents of both parties and was rewarded with lavish military aid.

From the beginning, the Carter Administration expressed disdain for the Shah.  President Carter pressed for the release of political prisoners. The Shah complied, allowing many radicals the freedom to openly oppose him.

Not satisfied with the pace or breadth of the Shah’s human rights reforms, Carter envoys began a dialogue with the Ayatollah Khomeini, first at his home in Iraq and more intensely when he moved to a Paris suburb.

Indications that the U.S. was souring on the Shah emboldened dissidents across the political spectrum to confront the regime.  Demonstrations, riots, and general strikes began to destabilize the Shah and his government.  In response, the Shah accelerated reforms.  This was viewed as weakness by the opposition.

The Western media, especially the BBC, began to promote the Ayatollah as a moderate alternative to the Shah’s “brutal regime”. The Ayatollah assured U.S. intelligence operatives and State Department officials that he would only be the “figure head” for a western parliamentary system.

During the fall of 1978, strikes and demonstrations paralyzed the country. The Carter Administration, led by Secretary of State Cyrus Vance and U.S. Ambassador to Iran William Sullivan, coalesced around abandoning the Shah and helping install Khomeini, who they viewed as a “moderate clergyman” who would be Iran’s “Ghandi-like” spiritual leader.

Time and political capital were running out. On January 16, 1979, The Shah, after arranging for an interim government, resigned and went into exile.

The balance of power now remained with the Iranian Military.

While the Shah was preparing for his departure, General Robert Huyser, Deputy Commander of NATO and his top aides, arrived in Iran.  They were there to neutralize the military leaders.  Using ties of friendship, promises of aid, and assurance of safety, Huyser and his team convinced the Iranian commanders to allow the transitional government to finalize arrangements for Khomeini becoming part of the new government.  Many of these Iranian military leaders, and their families, were slaughtered as Khomeini and his Islamic Republican Guard toppled the transitional government and seized power during the Spring of 1979.  “It was a most despicable act of treachery, for which I will always be ashamed” admitted one NATO general years later.

While Iran was collapsing, so were America’s intelligence capabilities.

One of President Carter’s earliest appointments was placing Admiral Stansfield Turner in charge of the Central Intelligence Agency (CIA).  Turner immediately eviscerated the Agency’s human intelligence and clandestine units.  He felt they had gone “rogue” during the Nixon-Ford era.  He also thought electronic surveillance and satellites could do as good a job.

Turner’s actions led to “one of the most consequential strategic surprises that the United States has experienced since the CIA was established in 1947” – missing the real intent of the Iranian Revolution, and anticipating the Embassy Takeover and Hostage Crisis.

The radicalization of Iran occurred at lightning speed.  Khomeini and his lieutenants remade Iran’s government and society into a totalitarian fundamentalist Islamic state.  Anyone who opposed their Islamic Revolution were driven into exile, imprisoned, or killed.

Khomeini’s earlier assurances of moderation and working with the West vanished.  Radicalized mobs turned their attention to eradicating all vestiges of the West.  This included the U.S. Embassy.

The first attack on the U.S. Embassy occurred on the morning of February 14, 1979.  Coincidently, this was the same day that Adolph Dubs, the U.S. ambassador to Afghanistan, was kidnapped and fatally shot by Muslim extremists in Kabul.  In Tehran, Ambassador Sullivan surrendered the U.S. Embassy and was able to resolve the occupation within hours through negotiations with the Iranian Foreign Minister.

Despite this attack, and the bloodshed in Kabul, nothing was done to either close the Tehran Embassy, reduce personnel, or strengthen its defenses.  During the takeover, Embassy personnel failed to burn sensitive document as their furnaces malfunctioned.  They installed cheaper paper shredders.  During the 444-day occupation, rug weavers were employed to reconstruct the sensitive shredded documents, creating global embarrassment of America.

Starting in September 1979, radical students began planning a more extensive assault on the Embassy.  This included daily demonstrations outside the U.S. Embassy to trigger an Embassy security response.  This allowed organizers to assess the size and capabilities of the Embassy security forces.

On November 4, 1979, one of the demonstrations erupted into an all-out conflict by the Embassy’s Visa processing public entrance.  The assault leaders deployed approximately 500 students.  Female students hid metal cutters under their robes, which were used to breach the Embassy gates.

Khomeini was in a meeting outside of Tehran and did not have prior knowledge of the takeover.  He immediately issued a statement of support, declaring it “the second revolution” and the U.S. Embassy an “America spy den in Tehran”.

What followed was an unending ordeal of terror and depravation for the 66 hostages, who through various releases, were reduced to a core of 52.  The 2012 film “Argo” chronicled the audacious escape of six Americans who had been outside the U.S. Embassy at the time of the takeover.

ABC News began a nightly update on the hostage drama.  This became “Nightline”.  During the 1980 Presidential campaign, it served as a nightly reminder of the ineffectiveness of President Carter.

On April 24, 1980, trying to break out of this chronic crisis, Carter initiated an ill-conceived, and poorly executed, rescue mission called Operation Eagle Claw.  It ended with crashed helicopters and eight dead soldiers at the staging area outside of the Iranian Capital, designated Desert One.  Another attempt was made through diplomacy as part of a hoped for “October Surprise”, but the Iranians cancelled the deal just as planes were being mustered at Andrews Air Force Base.

Carter paid the price for his Iranian duplicity. On November 4, 1980, Ronald Reagan obliterated Carter in the worst defeat suffered by an incumbent President since Herbert Hoover in 1932.
Posted by Scot Faulkner at 10:42 PM