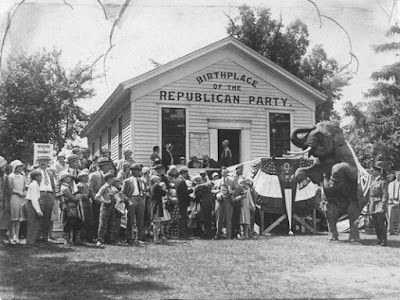 In the 1850s, America’s civic culture was crumbling. Decades of political compromise and avoidance on the issue of slavery had maintained an uneasy peace. The Mexican-American War (1846-47) added over 500,000 square miles to the U.S. and rekindled sectional competition. Ralph Waldo Emerson prophesied, “The United States will conquer Mexico, but it will be as the man swallows the arsenic, which brings him down in turn. Mexico will poison us.” [1]

The carefully orchestrated balance between Northern/Free states and Southern/Slave states in the U.S. Senate had only been maintained by tightly controlling the admission of new states to the Union. In 1820, Missouri was ready to be admitted as a “slave” state. Their Senate votes were to be off-set by separating the northern part of Massachusetts into the new “free” state of Maine. A key part of this Missouri Compromise of 1820 was to limit expansion of “slave states” to below a line, parallel 36°30′ north. However, after the Mexican War, Texas, California, and many other potential states, clamored for admission into the Union, reawakening the slumbering sectional strife and the “free” versus “slave” state controversy.

In 1850, a new Compromise was approved. This was a package of five separate bills that maintained the North/South balance in the Senate by allowing California to join the Union as a free state, even though its southern border dipped below the 1820 slave demarcation line. This was balanced by admitting Texas as a slave state. Other provisions balanced ending the slave trade in Washington, DC with establishing the Fugitive Slave Act, which required local officials in the North to aid in the capture and return of escaped slaves..

The Compromise of 1850 was the last great moment for the Whig Party. This party rose as a counter to the Jacksonian Democrats in the late 1830s. It thrived by broadly promoting westward expansion without a conflict with Mexico, supporting transportation infrastructure projects, and protecting fledgling American businesses with tariffs. The Whigs also benefited from having stellar leaders in the U.S. Senate, like Henry Clay and Daniel Webster, and attracting popular war heroes to run as their presidential candidates. The reawakening of sectional competition ended their brief moment of political ascendancy.

In 1848, the Whig Party split on slavery with pro-freedom/anti-Mexican War "Conscience Whigs" and pro-slavery "Cotton Whigs" ("lords of the lash" allied with "lords of the loom"). [2] They still stumbled across the 1848 Presidential finish line with Mexican War hero Zachery Taylor. Unfortunately, food poisoning led to Taylor’s death on July 9, 1850 ushering in the Presidency of anti-immigrant Millard Filmore and his “No-nothing” nativist movement. In 1852, the highly divided Whig Party needed 53 roll call votes to nominate another war hero, Winfield Scott, only to lose in a landslide to Pro-slavery Democrat Franklin Pierce. Rep. Alexander Stephens, a “Cotton Whig” pronounced, “the Whig Party is dead.” [3]

The implosion of the Whigs, and the new sectional rivalry, launched new parties, and factions within parties. These reflected the wide range of opinions on slavery from zealous support of slavery everywhere possible to immediate abolition everywhere possible. In the middle were factions that wanted to maintain the Union through various forms of compromise, allowing slavery some places, but not others.

This cauldron of factionalism came to a boil in 1854 with consideration of the Kansas-Nebraska Act, which was intended to void the carefully crafted Compromises of 1820 and 1850.

Anti-slavery “Free Soil” party activists along with anti-slavery “Conscience Whigs” and “Barn Burner” Democrats held anti-Nebraska meetings and rallies across the north. One of the organizers of these anti-Nebraska protests was Alvan E. Bovay.

Bovay was an active Whig, but was disappointed in the Party’s disarray over slavery.  He felt Party leaders had lost their way.  Only a new party, uniting anti-slavery factions across the political spectrum would resolve the divisiveness facing America. In 1852, Bovay visited his friend, Horace Greeley, the editor of the New York Tribune, discuss a new party.  They agreed a new party deserved a new name - Republican. [8] Launching this new party would have to wait until the Nebraska bill ignited wide-spread calls for strategic political change.

On March 1, 1854, Bovay announced an anti-Nebraska protest meeting in the local Ripon newspaper:

NEBRASKA. A meeting will be held at 6:30 o’clock this Wednesday evening at the Congregational church in the village of Ripon to remonstrate against the Nebraska swindle. [9]

After the meeting, Bovay posted in newspapers:

THE NEBRASKA BILL. A bill expressly intended to extend slavery will be the call to arms of a Great Northern Party, such as the country has not hitherto seen, composed of Whigs, Democrats, and Freesoilers; every man with a heart in him united under the single banner dry of “Repeal!” “Repeal!” [10]

The Nebraska bill.  A bill expressly intended to extend and strengthen the institution of slavery has passed the Senate by a very large majority, many northern Senators voting for it and many more sitting in their seats and not voting at all.  It is evidently destined to pass the House and become law, unless its progress is arrested by a general uprising of the north against it.

Therefore, We, the undersigned, believing the community to be nearly quite unanimous in opposition to the nefarious scheme, would call upon the public meeting of citizens of all parties to be held at the school house in Ripon on Monday evening, March 20, at 6:30 o’clock, to resolve, to petition, and to organize against it. [12]

Bovay and sixteen others met at the schoolhouse and decided to organize a Wisconsin state convention to endorse candidates for state and federal office.  Bovay worked with anti-slavery Democrat, Edwin Hurlbut, to develop a platform for the “Republican Party”. They organized and managed a state convention in Madison, Wisconsin on July 13, 1854. That convention nominated the first slate of Republican candidates for that fall’s local elections. [13].


The Republican Party spread across America, coalescing diverse factions into a new political movement that would dominate American politics for the next 76 years, winning 14 of the next 19 Presidential elections. It also signaled the end of 36 years of political obfuscation on the issue of slavery in America, ultimately leading to the Civil War.