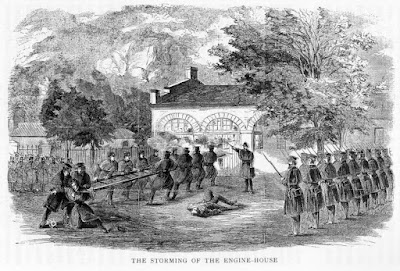 
On the evening of Oct. 16, 1859, John Brown and his raiders unleashed 36 hours of terror on the federal armory in Harpers Ferry, Virginia (now West Virginia).

The idea of openly rebelling against slavery was an extreme position in the 1850s. Abolitionist leaders felt slavery would either become economically obsolete or had faith that their editorials would shame the federal government to end the practice.

The Kansas-Nebraska Act of 1854 destroyed decades of carefully crafted compromises that limited slavery’s westward expansion.  The Act ignited a regional civil war as pro-slavery and anti-slavery settlers fought each other prior to a referendum on the state’s status – slave or free.  Smith enlisted the help of several of the more active abolitionists to underwrite Brown's guerilla war against slavery in Kansas in 1856-57. This group, including some of America’s leading intellectuals, went on to become the Secret Six, who pledged to help Brown with his raid.

Today, Harpers Ferry is a scenic town of 300 people, but in 1859 it was one of the largest industrial complexes south of the Mason Dixon Line. The Federal Armory and Rifle Works were global centers of industrial innovation and invention. The mass production of interchangeable parts, the foundation of the modern industrial era, was perfected along the banks of the Potomac and Shenandoah Rivers.

Brown moved into the Harpers Ferry area on July 3, 1859, establishing his base at the Kennedy Farm a few miles north in Maryland. The broader abolitionist movement remained divided about an armed struggle. During August 19-21, 1859, a unique debate occurred. At a quarry outside Chambersburg, Pa., Frederick Douglass and Brown spent hours debating whether anyone had a moral obligation to take up arms against slavery. Douglass refused to join Brown but remained silent about the raid. Douglass’ aide, Shields Green, was so moved by Brown’s argument, he joined Brown on the raid, was captured, tried, and executed.

The American Civil War began the moment Brown and his men walked across the B&O railroad bridge and entered Harpers Ferry late on the evening of Oct. 16, 1859. Brown's raiders secured the bridges and the armories as planned. Hostages were collected from surrounding plantations, including Col. Lewis W. Washington, great grandnephew of George Washington. A wagon filled with “slave pikes” was brought into town.  Brown planned to arm freed slaves with the pikes assuming they had little experience with firearms.


As Brown and his small force waited for additional raiders with wagons to remove the federal weapons, local militia units arrived and blocked their escape. Militia soldiers and armed townspeople methodically killed Brown’s raiders, who were arrayed throughout the industrial complexes.


Eventually, the surviving raiders and their hostages retreated into the Armory’s Fire Engine House for their last stand.  Robert E. Lee and a detachment of U.S. Marines from Washington, DC arrived on Oct. 18.  The Marines stormed the Engine House, killing or capturing Brown and his remaining men, and freeing the hostages.  The raid was over.

Brown survived the raid. His trial became a national sensation as he chose to save his cause instead of himself. Brown rejected an insanity plea in favor of placing slavery on trial. His testimony, and subsequent newspaper interviews while awaiting execution on Dec. 2, 1859, created a fundamental emotional and political divide across America that made civil war inevitable.

Edmund Ruffin, one of Virginia's most vocal pro-slavery and pro-secession leaders, acquired several of Brown's "slave pikes." He sent them to the governors of slave-holding states, each labeled "Sample of the favors designed for us by our Northern Brethren."  Many of the slave pikes were publicly displayed in southern state capitols, further inflaming regional emotions.

On April 12, 1861, Ruffin lit the fuse on the first cannon fired at Fort Sumter in Charleston, South Carolina.  The real fuse had been lit months earlier by Brown at Harpers Ferry.
Posted by Scot Faulkner at 9:26 PM