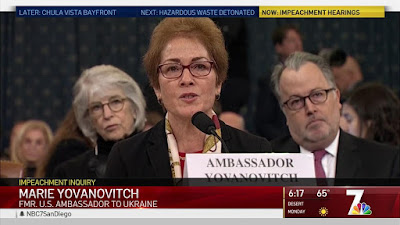 
The surreal world of the Trump Impeachment Inquiry is assailing those who respect the will of the voters.  Those defying this fundamental principle of American democracy are being lauded.

It is perverse to allow opponents of voter-mandated change to remain in policy positions.

Trump’s predicament was completely avoidable.  All he had to do was be as assertive with government personnel as he was with his company’s hiring and firing.

It is doubtful that Trump left legacy executives in place when he acquired hotels, golf courses, and casinos.  Trump brought in his own team.  They assessed the management and service team members, to align them with Trump’s corporate culture and branding.  Those who displayed loyalty and competence remained, all others were replaced.  This happened quickly.  Once the Trump logo was unfurled, Trump’s operational culture and customer service experience had to exist.

It is, therefore, disappointing that Trump approached the Executive Branch with such hesitancy.

Like any large vessel, the federal “ship of state” has a command bridge from where the captain leads the ship.  A new President quickly realizes that, while his bridge, the Oval Office, affords a wonderful view, its steering wheel and control levers must be hooked-up to run the ship.  Control of the engine room is fundamental to moving in the intended direction. The ship’s crew must follow the captain’s decisions.  It is the same in the Executive Branch.  People equal policy.

The Executive Branch is far more complex than any ship or corporation.  The outgoing party leaves behind cadres of guerrilla fighters to frustrate, hinder, and destroy the new President’s agenda.  This preserves the old and enables defeating the new.

Cabinet Departments and agencies each have unique cultures that shape those serving in the career service.  Depending on the party in power, some agencies will be more friendly or hostile than others.

Careerists can be just as political as political appointees.  Their politics is about preserving power, funding, turf, prestige, and policy.  Those aligned with the previous Administration will have benefited from rapid advancement.  Those less enthusiastic, will have been relegated to dark recesses, well away from critical policy paths.

An incoming Administration uses its network of friendly Congressional offices, policy organizations, and media outlets to map out its allies and enemies within the Executive Branch.  This is what Transitions are for.

Trump was ill-served from the start.  He ignored the advice and offers of help from Ronald Reagan alumni, who ran the last fully successful Republican transition.  Instead, Trump turned to Governor Christie.  Christie turned to his friends in the Romney, Bush, and Ford circles.  They recommended that the Boston Consulting Group, the epicenter of Bush operatives, run the Trump Transition.  The rest, sadly, is history.

It could have been so different.

This conservative network placed key operatives into Reagan’s national campaign and transition.  They identified over 17,000 positions that affected Executive Branch operations.  A separate team identified the key positions in each cabinet department and major agency that had to be under Reagan’s control in the first week of his presidency.

On January 21, 1981, Reagan’s personnel team immediately removed every Carter political appointee.  They were walked out the door, identification badge taken, files sealed, and their security clearance terminated.  In one instance, a Carter political appointee at ACTION was physically prevented from signing the nearly one million dollars of leftist grants sitting on his desk.  The Carter era ended completely and instantaneously.

Over the next sixty days, Ambassadors were recalled, White House detailees were reassigned. Every management and supervisory careerist who had been hired or promoted during the previous year was reviewed, and those not truly there on their merits, were removed.

American voters soundly rejected Carter and wanted the Reagan Revolution.  They got it.

Reagan loyalists, as temporary appointees, entered every cabinet department and agency to enforce policy, review contracts, and terminate anyone or any entity that were there to promote Carter policy.  Every legal action, regulation, negotiation, and grant was stopped until assessed based upon Reagan policy.  Overwhelming numbers of fulltime Reagan loyalists rapidly implemented his revolution.

By May 1981, Reagan was in full command of the Executive Branch.  Core management teams in every department and agency moved deeper into the bureaucracy.  Wave after wave of management and personnel changes occurred, paving the way for the Reagan Era to flourish.

Thorough planning and expert implementation by solid loyalists resulted in no leaks and no sabotage.

Reagan had a sign on his desk “It CAN be done”.