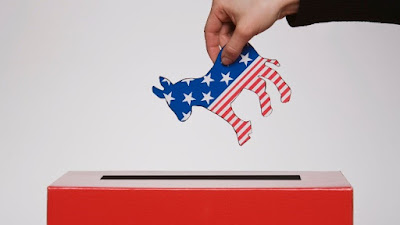 “Dewey Defeats Truman” was the banner headline on the Chicago Daily Tribune November 3, 1948. I am guessing that the above headline probably seemed as strange. But it’s true! The Democrat Party has all but overtly given up the 2020 presidential election.

Let’s examine the facts and see why this conclusion is probable. First the candidates. Joe Biden will be out of the race in the very near future. It is only a matter of time before all of his problems sink him. Between his gaffes and other issues while he was the Vice President, his son, Hunter, will probably provide the ignominious ending to a political career that should’ve ended years ago.

And Bernie? Beyond his advanced age, he is like a mediocre boxer entering the ring with one arm tied behind his back. People will not ignore the fact that he has health issues – including “chest pains” – even before he assumes the position of President! “He has continued to raise substantial amounts of money [however] from his dedicated supporters — on Tuesday, his campaign celebrated an impressive third-quarter fund-raising haul of $25.3 million — and has remained among the top three contenders in the primary. But he has been unable to expand his base beyond those enthusiasts. In recent weeks, he shook up his staff in Iowa and New Hampshire, the first two nominating states, in an effort to jump-start his candidacy as Ms. Warren passed him in some polls….

“In recent weeks, he has struggled with hoarseness, which forced him to cancel several events last month, but he then returned to the campaign trail. In March, he hit his head on the edge of a glass shower door, requiring seven stitches.” https://www.nytimes.com/2019/10/02/us/politics/bernie-sanders-health.html

Elizabeth Warren seems to be getting traction. But every time she opens her mouth to deliver some sort of pithy anecdote, a falsehood rolls out of her mouth. “Elizabeth Warren is telling a lie about herself. Again. The media are covering for her. Again.

“It is by now well established that Elizabeth Warren is a serial liar. She lied about her parents having to elope because of racism against her mother, who was white. She lied about being the first nursing mother to take the bar exam in New Jersey (which doesn’t keep such records). She lied about being a “single mom” when she met her second and present husband (she was still married, and had not yet filed for divorce). She lied about the death of Michael Brown, which was not a murder. Only recently, after more than 30 years, has she stopped lying about being a Cherokee and a woman of color.

“Lately Warren has been telling a story about how a boss supposedly fired her from a teaching gig after discerning at a glance that she was pregnant. Her own previous telling was otherwise: She walked away from that job.” https://www.nationalreview.com/2019/10/media-cover-for-elizabeth-warren-lies-again/

I’m only presenting the top three candidates because after that – there is no hope. All of the other candidates have already demonstrated they would not be able to handle the duties of President of the United States – and the American voters understand that. Do not believe the polls because the media have skewed all possible angles of this election to accentuate the positives of any Democrat candidate to make them a better candidate than President Trump. The problem is that the extreme right and the extreme left get most of the headlines because the media reports on them as if they represent all of the moderates who may simply lean slightly to the left or slightly to the right. This means that elections are won in the middle and currently not enough Democrats recognize it. If you are a registered Democrat and you always have been, but you are considering voting for Trump – well, that really sums up the trouble that party is in now. Also, don’t forget about the silent majority.

Finally, “According to Moody’s Analytics, Trump is headed toward another four years in the White House. And, if the numbers are right, it won’t even be close….

“Under the current Moody’s Analytics baseline economic outlook, which does not forecast any recession, the 2020 election looks like Trump’s to lose,” the authors wrote. “Democrats can still win if they are able to turn out the vote at record levels, but, under normal turnout conditions, the president is projected to win.” https://www.marketwatch.com/story/trump-in-a-landslide-this-historically-accurate-model-predicts-exactly-that-2019-10-15?siteid=yhoof2&yptr=yahoo

Granted the “Moody’s Analytics” is a pocketbook analysis: If the economy is strong, Trump Wins; if it is a recession, Trump may lose. But as the article points out, it has only been incorrect once since 1980 – and that was with Trump!

So, what is a Democrat to do? Wait and see. Between now and February 2020 there may be some last-minute changes – like Hillary Clinton joining the fray and running for President. Another possibility: Michelle Obama. While she has professed no interest in running for President, there are many people who have encouraged her and believe she could win.

Other people believe Trump would shred her. I personally believe that she will reenter politics at some point. Right now, I think that the Democrat Party is trying to groom her for a Presidential run in 2024.

The bottom line: The Democrat party does not have a viable candidate – and they know it! I believe President Trump will be reelected – and there will be no need for a recount!

Posted by Scot Faulkner at 8:03 PM