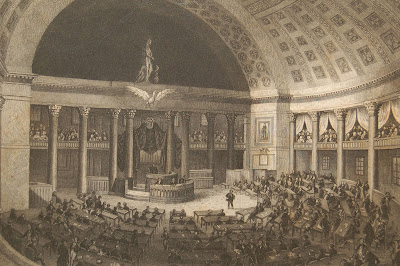 
The reason the U.S. House of Representatives is so different from the U.S. Senate is deeply rooted in the history of representative democracy.


Since the first time hunter gatherers sat around a campfire, leaders depended upon the advice of trusted counselors. These advisors evolved into a lord’s or noble’s Privy Council, and eventually into the “upper chambers” of many democracies, such as Britain’s House of Lords. These members were chosen “from above” – directly by the noble, not “from below” – by the people. In America, the U.S. Senate was based on being chosen “from above” by State Legislatures until April 8, 1913, when the 17th Amendment to the U.S. Constitution mandated that Senators be directly elected.


The path that led to the U.S. House of Representatives took much longer. Leaders needed centuries, and revolutions, to accept sharing power with those they ruled.


The path to the people choosing their representatives began because Humans are naturally entrepreneurial. It did not take long after the Vikings and other raiders settled down that towns and trade arose throughout Northern Europe. The moment merchants could exchange goods in safety, economic activity burst from out of castle walls and pulled away from the control of the nobility. Anywhere there was a harbor, or roads crossed, commerce occurred and towns grew.

By the 12th Century, towns, like Lübeck in Germany, were growing large enough to have their own governance. They still paid homage and taxes to nobles, but day-to-day commercial activity was now locally controlled by town councils (members known as burghers or burgesses) and by skilled associations and guilds of artisans.

Local governance, except during the religious wars of the 16th and 17th Centuries, was focused on the basics of human existence. This includes water, sewer, garbage, roads, and safety. By focusing on the engineering aspects of daily life, people learned how to work together, sorted out differences, and developed the vital attributes of civilization – tolerance of differences balanced with rules of engagement.

Economic freedom was the other driver for representative democracy. Once people were able to make a living with little or no meddling from the noble, they realized that the noble needed them more than they needed the noble. The noble wanted to maintain his castle and his knights both for protection and power. For this he needed to charge fees or taxes. Once independent towns grew outside of castle walls, or far away from manor lands, people had the freedom and mobility to “vote with their feet”. If a noble is cruel, corrupt, or charges extortionary taxes people would move to the next village.

Economic vitality and localism in England drove a centuries’ long migration from King over the people to people over the King. On June15, 1215, local English nobles forced King John to sign the Magna Carta declaring he could not levy taxes without their consent.

The Magna Carta initiated a tug-of-war between King and subjects.


By 1341, the Commons began to meet separately from the nobility and clergy (now the House of Lords) in Parliament. Parliament, now with two chambers, expanded its role from validating royal edicts to initiating its own edicts, and ultimately to reviewing and even rejecting the King’s actions.


By 1485, the King was no longer a Member of Parliament. By this time a member of either chamber could present a "bill" to Parliament. Bills supported by the monarch were introduced by Members of the Privy Council, who sat in Parliament. In order for a bill to become law it had to be approved by a majority of both Houses of Parliament before it went to the King for their approval or veto. The basic outlines of western Democracy were forming.

In the 17th Century, Charles I tried to reverse these arrangements, fought and lost a civil war, and then lost his head. The British Parliament sanctioned dictatorship, then returned to the old ways, before finally establishing the power to remove or anoint kings during the “Glorious Revolution” in November, 1688. In 1701, the “Act of Settlement” codified the preeminence of parliament and began the English constitutional monarchy.

America’s path to the U.S. House of Representatives took a similar course. The Royal Charter that established Jamestown in Virginia evolved from governance by the Charter holders into governance by the King’s Representative (Royal Governor) and his Advisory Council. When the settlers demanded their own voice, the Virginia House of Burgesses, in 1619, became the first democratically elected legislative body in America.


The House of Burgesses became a proving ground for what would become the U.S. House of Representatives. Drawing upon British tradition, revenue and spending bills originated in the House instead of the “upper chamber”. Drawing from British tradition, the members of the House held their positions for short periods of time in order to be held closely accountable by those they represented.


James Madison and Alexander Hamilton, writing under the pseudonym “PUBLIUS”, outlined the reasons for the unique binding of the House of Representatives to those they served.


As part of their series of essays advocating for the ratification of the U.S. Constitution “PUBLIUS” wrote in Federalist No. 52:


“First. As it is essential to liberty that the government in general should have a common interest with the people, so it is particularly essential that the branch of it under consideration should have an immediate dependence on, and an intimate sympathy with, the people. Frequent elections are unquestionably the only policy by which this dependence and sympathy can be effectually secured…. It is a received and well-founded maxim, that where no other circumstances affect the case, the greater the power is, the shorter ought to be its duration.”


Their case for shorter terms of service and frequent elections was detailed on February 19, 1788 in FEDERALIST No. 57


“The House of Representatives is so constituted as to support in the members an habitual recollection of their dependence on the people. Before the sentiments impressed on their minds by the mode of their elevation can be effaced by the exercise of power, they will be compelled to anticipate the moment when their power is to cease, when their exercise of it is to be reviewed, and when they must descend to the level from which they were raised; there forever to remain unless a faithful discharge of their trust shall have established their title to a renewal of it.”


When the U.S. House of Representatives meets, it draws upon this rich and deep history and set of precedents. It remains true to its origins: larger, rowdier, fractious, governed by rules and votes, and highly sensitive and responsive to the popular will and issues of the moment. This is in contrast to the slower pace, decorum, and informal agreements that characterize the Senate.

Posted by Scot Faulkner at 8:47 PM