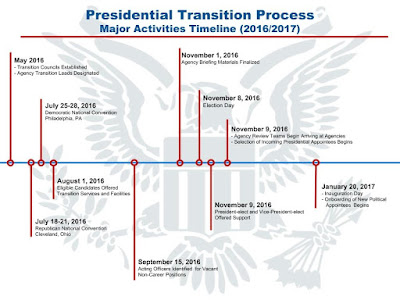 Trump’s unconventional approach is perfectly matched for a process called “LEAP”.  LEAP is a four dimensional environment for acquiring immediate operational control of the Executive Branch and achieving operational excellence.

LOCK EVERYTHING DOWN.  Trump needs to insert “Occupation Teams”, professionals skilled and committed to making the new Administration an immediate operational reality, into all Cabinet Departments and major agencies to instantly end the Obama era.  This means full control of every key input box and out box.  Nothing should happen until signed off on by the Trump Occupation Teams.

Locking everything down also means revoking all delegations of authority and forcing every action, communication, and policy into the hands of the Trump Occupation Teams immediately.  The Occupation Teams must literally patrol the corridors and rattle door knobs to make sure no one is extending the Obama era.  The first few days of Reagan’s Presidency found numerous examples of career employees refusing to yield.  In one case, a grant administrator had to be physically stopped from approving $350,000 of Carter era grants still sitting on his desk.

Forcing everything through the Occupation Teams lets them review everything.  Their discoveries will range far beyond the briefing books and guide change.  Delegations can be redirected or renewed as trust and discipline are built within the new Administration.

ELIOT NESSING is all about people.  Eliot Ness was a FBI agent best known for building his team with “untouchables” – colleagues who were honest, trustworthy, and immune from corruption.  Trump and his team must do the same thing throughout the Executive Branch.

Both Republican and Democrat political appointees complain that their career colleagues often hide, spin, or fake facts.  This is not partisan.  Careerists want to protect their power, turf, reputation, and pet projects.  This even happens within the Office of the President as this organization is filled with career employees.

The transition planning process needs to start identifying trusted colleagues ASAP.  These may be whistleblowers who will embrace change, and confidential sources who have already proven themselves credible to Congress and media allies.  This first wave of trusted professionals identifies those they trust, and so on, until there is a critical mass to substantively shift policy and operational direction throughout the Executive Branch.

ASSESS.  Every part of the Executive Branch is a huge fire hydrant of information.  Trump and his team could be easily overwhelmed by the volume and velocity of information.  Turning this flood into actionable intelligence is not easy.   “Untouchables” can help sort what is true, false, or altered.   They will also align information with actions designed to tangibly achieve the critical outcomes of the new Administration.

The Occupation Teams, with their “untouchable allies”, need to be skilled in turning seemingly random data points and factoids in patterns and trends.  The 9,000+ annual audit and investigative reports from Inspectors Generals and the Government Accountability Office (GAO) are a great place to start.  Tallying these findings, to identify which offices and programs are most corrupt or dysfunctional, will guide personnel changes and reinventing processes.  During the Reagan era, “war rooms” were created with whole walls full of organization charts designed to graphically chart areas of excellence or decay.

Other evaluation steps include costing out waste.  Corruption and dysfunction can be a onetime flood or a “leaky faucet” dripping millions of dollars.  How much, how fast, helps determine urgency.  Assessing solutions is also a key activity.  How easy is the solution?  Is it about changing processes or procedures?  Is it about abolishing or outsourcing?  Can it be handled internally or is legislation required?  Are there impacts affecting other parts of government? Permanently solving a problem is always preferable.  However, sometimes limiting the problem’s scope or impact may be a necessary interim step pending strategic action.  It is like using a spare tire to get your car to a garage.

PRIORITIZE.  Verified and actionable information, matched to implementing critical outcomes, can be sorted by what is easy or hard to do.  Another sorting of initiatives is by the tangible return on the investment of resources and political capital.  Lower return initiatives should only be pursued if they are easy and fast.  Such smaller efforts season and inspire teams to seek bigger challenges.

Many strategic initiatives fail because the focus is on big things that may take years to achieve.  The zeal and momentum of a new Administration falters as weeks or months unfold without victory.  Better to amass numerous small victories to prove change can happen to build enthusiasm for the harder challenges ahead.  Alternatively, going after the bigger more difficult projects come into focus with the knowledge that the effort is truly worth the effort.

The Prioritization Grid © has been used to guide successful transformation in governments and corporations around the world.  Surprisingly, over half of the initiatives placed on this grid usually turn out to be easy to do with high returns on the effort.  This nonlinear holistic approach to revolutionary change drove the historic Congressional reforms of the mid-1990s.

Presidential Transitions gather information to assure the President and Presidential Appointees “hit the ground running”.  There is far more that should be done to support Trump’s unique leadership in these challenging times.

[Scot Faulkner was the National Director of Personnel for Reagan-Bush 1980.  He also served on the Transition Planning Team and as a Transition Administrator.  He subsequently served as Clearance Officer for Presidential Personnel on Reagan’s White House Staff.]