Why Donald Trump Is Our Nation’s Hope 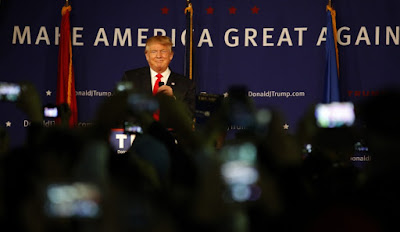 
With the Republican Convention looming, I hope that the handful of people that cannot seem to accept the reality that Trump won the nomination fairly will embrace him. “Many say, like him or not, Trump won and efforts to dump him would be crushed and would devastate the GOP. According to The Associated Press, Trump has 1,542 delegates, including 1,447 required by party rules to back his nomination, well above the 1,237 needed for victory.” http://hosted.ap.org/dynamic/stories/U/US_GOP_2016_TRUMPS_PARTY?SITE=AP&SECTION=HOME&TEMPLATE=DEFAULT  He is the (presumptive) Republican nominee – if you believe the millions of voters who voted for him in the primaries. I hope that these maverick dissidents realize that a vote for Trump is a vote to save the nation; any other alternative is to return a Democrat to the White House. It is hard enough to have to tolerate the MSM which is doing everything to discredit Trump and many of the other Republican candidates. We do not have a fair and balanced approach to our reporting media any longer. Reading some blogger’s comments bolstered my confidence that the electorate is catching on. For example, “Polls like this mean nothing, all slanted by the left trying to push the attention away from all the Clinton money scandals.” How about: “Well when almost all media outlets are bad mouthing and highlighting his negatives what do you expect? Can we hear all of Hillary's lies, scandals, and hypocrisy? Trump's issues are repeated 100 times while Clinton's mentioned briefly at best.”


I am incredulous that there are still those who think replacing Trump at the convention – using whatever tactic they can including changing the rules – and putting somebody else in his place is a viable solution. To say this is just plain stupid. I guess that desperate people do desperate things. The Republicans need to unite – now, not later – if they are to have any hope of winning the White House. Further, any attempt to replace him would be an unmitigated disaster. “‘It's a fantasy, it won't happen,’ said Morton Blackwell, a Republican National Committee member from Virginia who initially backed Cruz.” Another voice of reason: “‘We have a responsibility to respect our democracy, and that means we accept the outcome of the vote,’ said Rep. Austin Scott, R-Ga., who supported the presidential bid of Sen. Marco Rubio, R-Fla.” (Ibid) Further, there is no guarantee that their replacement would fare any better (still dealing with a Republican, you know); and worse yet, besides losing the election, they would definitely lose millions of voters – many of whom stood in line for hours to vote for Trump – and therefore bring about the ultimate demise of the Republican Party. I think that the Establishment members who are pushing to dump Trump have overlooked the fact that they can be replaced, too. Our career politicians have been silent or otherwise ignored their elected responsibilities as legislators to be a check and balance on the Executive Branch – and now they want us to listen to them? Ask yourself: what have these dissenters accomplished in the last 7+ years?


Politico states: “While Trump’s insurgent candidacy has spurred record-setting Republican primary turnout in state after state, the early statistics show that the vast majority of those voters aren’t actually new to voting or to the Republican Party, but rather they are reliable past voters in general elections. They are only casting ballots in a Republican primary for the first time.” http://www.politico.com/magazine/story/2016/05/donald-trump-2016-polling-turnout-early-voting-data-213897 But even if that’s true, it is exciting because it bodes well for capturing voters who stayed home the last two elections (at least now they are motivated) and says nothing about independents and perhaps even Democrats who may vote for him. Granted, there may be Republicans who are going to vote Democratic. But I have written in previous blogs that there has been a paradigm shift in the electorate; I may be hopeful, but I believe that November will fool many people – pundits included (maybe me too, but I’m an optimist!). I do not think that either political party gets this. However, I think overall that the electorate is tired of being taken for granted; they are also tired of the career politician’s deceitful promises, their lying and their manipulations. We are taxed to cover absurd social programs, have experienced an influx of illegal aliens and are paying for their healthcare – but yet we have to pay for our own? Finally, we can’t forget the generous retirement packages these same career politicians have given themselves. Maybe we should help them take advantage of their retirement packages!


So here’s what’s at stake in November. Of primary importance are the nominations to the Supreme Court. Trump will nominate judges that know the law and how to interpret the Constitution; he has already released a list of those he would consider. He is a successful manager of money, people, and projects; he knows about spending, debt, and wealth. He understands the economy both domestic and foreign, job creation and the business world; he is financially independent and beholden to no one, especially donors – possibly one of the reasons why the current Establishment is afraid of him. He has an excellent attitude regarding our military – rebuilding it and especially, taking care of our veterans. He is – and this is important – an excellent negotiator. But most importantly, he loves America! In summary, he has real-world experience; he is resourceful, creative, and results driven to get the job done. He has viable accomplishments. He is not politically correct, and this is a tremendous part of his popularity: I believe people are fed up with political correctness. Granted this may make him a little “rough around the edges,” and it sometimes gets him into trouble. But because the MSM hates him, anything that he says that can be misconstrued, will be. Also, if he becomes President, many things will have to change. For one thing the largesse of the Washington arena will change; Trump is also probably “stepping on the toes” of others, maybe threatening their power base. I believe that there will be a major impact on the media; he routinely asserts himself and insults them (justifiably) for their lack of integrity, misrepresentation, being biased and agenda driven, and for their failure to report the facts honestly and accurately. And if he becomes president, it should serve as a message to the entire Establishment that the people have spoken and chosen their leader based on results and not their political ideology and agenda.


Because Mr. Trump is not a polished, political candidate, he needs to learn to tone down his presentations and off-the-cuff remarks. I think people believe he is genuine, but he needs to be more diplomatic and professional; maybe then the rest of the Republican Party will back him. We have serious problems in this country, and his tone is not as important as his ability to be President. Trump is the answer to the problems this nation faces. Unfortunately, it may come down to whom the electorate feels is the "lesser of the two evils"; it’s a shame when you have to vote for a candidate you may not like because you like the other one even less! Will he win? All the pundits have guessed wrong on most things until now. There is strong evidence that a lot of public opinion surveys may hide a segment of Trump’s supporters. Many voters are reluctant to admit in a live interview (vs. online survey) that they support Trump. This creates the possibility of a large block labeled the “silent majority” – does he have one?


In closing, the Republican Establishment has no one to blame but themselves for this situation. It has been posed whether Republican voters share the values and principles of the Republican Party; I would guess that the 10.7 million votes cast for Trump during the primaries say no. I believe that if Trump’s ground game is good, he will win. Here’s a sample of why: http://www.donaldjtrump.com/media/donald-trumps-campaign-draws-dedicated-followers          I think Mr. Trump hit the nail on the head when he said to the leaders: “This is too tough to do it alone, but you know what I think I'm going to be forced to….Be quiet. Just please be quiet. Don't talk. Please be quiet. Just be quiet ....We have to have our Republicans either stick together or let me just do it by myself."

Posted by Scot Faulkner at 4:01 PM

Great article...I agree that that establishment has only done this to themselves. Though not a deep list of candidates to chose from, its going to be a fun summer. I live in Cleveland and cant wait till the RNC. Hopefully we get the Office of The US President back on track.