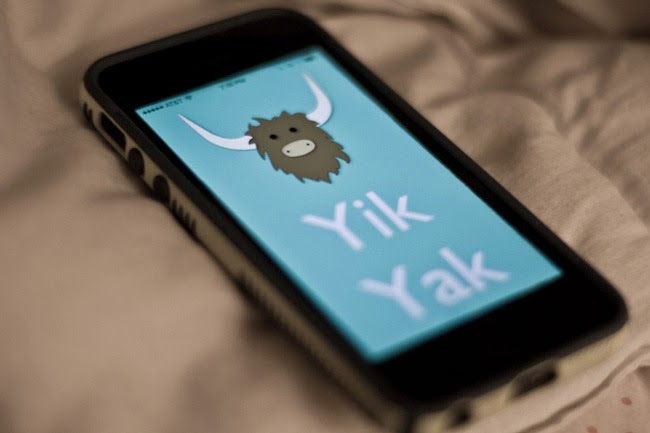 “There’s an App for that” has become a common phrase as the possibilities of our digital age are limited only by our imagination.

Unfortunately, those who wish to do harm also have unlimited ways to pervert and abuse technology.  The latest opportunity for abuse is Yik Yak. http://yikyakapp.com/

Yik Yak was developed to provide college students with a highly localized way to handle lost & found and Yelp type reviews of on and off campus services [only the first 500 hundred nearby users connect through GPS tracking on their phones].  It makes sense.  The cyber world does not need to be cluttered by someone looking for their lost book bag at a small college.

Yik Yak has already attracted 100,000 users, and is now in the top 100 most popular Apps on Apple’s App Store.  The downside is the App is becoming a favorite of Cyber Bullies.  In , a 16-year-old and 14-year-old were arrested after three schools had to shut down for a day because of their posting threats on Yik Yak.

So far the response to Yik Yak has been to ban the App or block its reception.

Bullying has been around as long as humans felt the need to establish “pecking orders”.  There will always be Apps to enable abusive behavior.  The challenge is creating cultures and processes to prevent or quickly eradicate this behavior.

I was bullied relentlessly in school.  My underlying identifier was being a “nerd”.  Add to that the Trifecta of glasses, being a “late bloomer” in terms of height, and “buck teeth” that led to braces.  Play ground taunts in 6th through 8th grade were bad enough, but the worst came in 9th grade gym class.

A group of boys were called “F Troop” after the TV show about dysfunctional soldiers.  They were the ones who got the lowest grades and the detention [my school had no minorities - this was among whites in an upper middle class suburb].  They used gym class to harass those of us who were smarter, but less physically developed.  I dreaded every moment.  Harassment escalated.  Once, I was socked in the stomach so hard I passed out.  The gym teacher, a former Marine, refused to get involved or even call the nurse.  He just told me, then age 14, to “be a man” and work things out myself.  When a hunting knife was brandished at me I went to the school counselors.

The counselors worked with me to review the entire situation.  I agreed that singling out current offenders would probably lead to others in “F Troop” taking their revenge.  After some research a solution emerged.  There were four groups of 9th grade boys for the purposes of scheduling gym, study halls, and some elective courses.  The “jock” group was matched with another group of “nerds”. The counselors agreed to place the jocks with “F Troop” and the two nerd groups together.   The jocks were on equal physical footing with “F Troop” so the bullying ended.

Or did it?  In 2002, Rachel Simmons published her detailed research on how bullying impacts young women throughout their lives http://www.rachelsimmons.com/books-and-tv/ . Last year, Paul Meshanko, published his ground breaking analysis on how disrespect fundamentally alters brain chemistry http://respecteffectbook.com/ .

At my 20th high school reunion very few of the “F Troop” attended.  Many were either in jail or dead (drugs or violence).  One “F Troop” alumnus had served in and became an airline pilot, proving that people can change given the right circumstance. For most of “F Troop”, once labeled by school officials, they continued on their destructive paths.  My personal trauma in gym class led to a life long ambivalence to sports and sports’ figures.

Bullying has become more pervasive because our digital age follows us 24-7.  When I was growing up, I could return home to a loving family and friends of my choosing.  There were no bullying posts on Facebook, Twitter, Snap Chat, or Yik Yak to haunt me outside of school.

Today’s digital “echo chamber” makes it imperative that school officials remain vigilant and pro-active to bullying.  Blocking technology abuse can certainly help, but finding ways to prevent or diffuse situations and build anti-bullying values throughout their school’s culture will save lives and improve others.

Respect and anti-bullying is about more than technology – it is about behavior and values.

[Scot Faulkner is a Senior Advisor to Legacy Business Cultures.  He served as the Chief Administrative Officer of the House of Representatives and was a Member of the White House Staff.  He attended in a suburb.]
Posted by Scot Faulkner at 6:24 PM