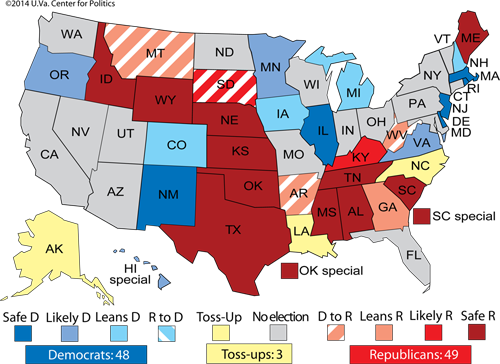 Current signs point to November 4, 2014 being a terrific day for the Republican Party.  The GOP may retake the Senate for the first time since losing it in 2006, and at least maintain its margins in the House and in state governments.

Even with this wave of rosy analysis, Republicans feel a gnawing pit in their stomachs. The last four elections have seen mind boggling reversals of fortune as the GOP found amazingly creative ways to snatch defeat from the jaws of victory.  The ghosts of Aiken, Mourdock, and O’Donnell remind Republicans of their epic failures in candidate vetting and message discipline.

Last year’s Republican meltdown in was an object lesson on how ethics trumps party.  also proved that Republican candidates lose when they channel Tomás de Torquemada and Nathan Bedford Forrest instead of Ronald Reagan.

There are many things that Republicans should do, and should avoid, in the seven months before the next election.

OVERSIGHT!
Republicans are in a rhetorical bind.  On one hand, they berate President Obama for being weak in dismantling ’s global leadership role, and then they turn around and declare Obama to be an arrogant and aloof “Imperial President” over his expansive use of Executive Orders and recess appointments. http://freebeacon.com/politics/the-imperial-presidency/

One way Republicans can both slow-up Obama domestically and build their case against him is to conduct wall-to-wall oversight hearings.

Every House committee and subcommittee has the legitimate responsibility to conduct hearings on the actions of executive branch departments and agencies. Some of this is already occurring:

House Republicans should do far more of it.  They need to realize that executive branch entities spend dozens of staff days preparing for each hearing.  Senior officials and political appointees may sit before the microphone, but a cadre of staff and subordinate officials sit behind them.  This diverts countless executive branch resources from taking the initiative elsewhere.

One cautionary note - Republicans need to ask questions, not make assertions.  The most potent scandals occurred when the Legislative Branch asked leading questions.  “What did the President know and when did he know it?” remains one of the best mantras from the Watergate investigation.  The moment the investigator overreaches the evidence and leaps to a public conclusion, the tables turn and the public begins challenging the investigator and the investigation itself.  The ghost of Senator Joe McCarthy hovers over every Congressional probe.

REMEMBER WHAT CENTURY YOU ARE IN!
It is doubtful there are many Republican viewing parties for “Cosmos”.

Republicans used to be the science party.  NASA was formed under Eisenhower.  Voyager was developed and launched under Nixon.  Reagan remained stalwart for space exploration in the face of the Challenger disaster.  Reagan also initiated the Human Genome Project.

For some reason, many Republicans have turned their backs on the 21st Century and marched back to the 16th.  Top Republicans fight evolution, assert the Earth is only 5,000 years old, and selectively cite Biblical passages to promote big government intervention into private lives.  William F. Buckley, Ronald Reagan, and numerous other conservative intellects, found ways to espouse traditional values and faith while hailing science and the modern world.  Why is it so hard for Republicans in 2014 to strike the same balance?

Their embrace of fundamentalist Christians (TheoCons) has trapped them in the anti-science mindsets of Martin Luther (1483-1546) and John Calvin (1509-1564). It is truly sad that so many Republicans and “conservative” pundits have enthusiastically chosen anti or pre Enlightenment Era dogma.  They could easily embrace the thinking of Benedictus de Spinoza (1632-1677) and Gottfried Wilhelm Leibniz (1646-1716), who reconciled an active God with scientific discoveries. http://serendip.brynmawr.edu/Mind/17th.html

Republicans will lose large swathes of the electorate if they continue to be caught in intellectual time warps.

AVOID BAD PHOTOS AND SOUND BITES!
Republicans and conservatives have a mental block about the digital age.  They forget that everything outside of their home is fair game.  In a world of security cameras and mobile phones, everything we say and do, if it is sufficiently embarrassing or the person is sufficiently significant, will be instantaneously shared with the world.

The existing evidence is overwhelming. In 2012, Romney assumed explaining his negative view of Americans would not go past the high roller donors in a hotel ballroom (no one thought about the catering staff in the back of the room).  This year, the Conservative Political Action Conference (CPAC) booked a huge room for a marginal issue (at least in the minds of their attendees). The visual was devastating. http://aattp.org/the-gop-threw-a-minority-outreach-party-at-cpac-nobody-showed-up/

LEVEL THE PLAYING FIELD!
There are as many Looney Liberals as there are Crazy Conservatives.  However, you would never realize this parity from the Internet or the news media.

Republicans also make it harder on themselves when they promote friendly fire.  The Sesquicentennial of America’s Civil War has opened the door for some conservatives to embrace Southern succession and attack .  This bizarre revisionism of history and Republicanism reached a pop culture boiling point when libertarian pundit Andrew Napolitano first attacked Lincoln on Fox News and then double-downed with a broader anti-Lincoln, anti-Union, rant on Jon Stewart’s “The Daily Show”.  Many conservatives rallied to Napolitano’s defense and collectively threw and the founding principles of the Republican Party under the bus.

Republicans need to honor their roots and their heroic Presidents.  Democrats and liberals always have preprogrammed accolades for every Democrat who made it into the White House, as well as a preprogrammed defense or dismissal of anything negative about their Presidents.  Republicans, on the other hand, find it easier to generate negatives rather than positives about their political ancestors.  The only exception is their fixation with venerating the Bush dynasty (more on that later).

Republicans are also at a disadvantage because many of their crazies love publicity and attract ovations and accolades within the conservatives’ incestuous media echo-chamber. It is hard to label crazies as “outliers” when they keynote political functions and are feted on talk shows.

Republicans not only need to silence or marginalize their crazies, they must strategically reposition the lunatics on the Left.  On any given day there are stories about corrupt Democrats and over-reaching liberal loonies, but they remain buried in local news stories or conservative social media sites.

Here are some examples:

In , Democratic Legislators are defending the slaughter of dogs and cats for meat.  Why is that not fodder for Fox News and conservative talk radio?
http://nypost.com/2014/03/14/hawaii-tries-to-ban-eating-cats-and-dogs/

A banned footballs and other athletic equipment to reduce injuries.  Supposedly, Nurf balls are okay.
http://newyork.cbslocal.com/2013/10/07/long-island-middle-school-bans-footballs-other-recreational-items/

Republicans need to establish a daily drumbeat of stories that force Democrats and liberals to confront their own outliers.

ORCA was an embarrassing joke from its inception, but local Republican leaders were afraid to speak up or bought into the hype.  Underlying this abject failure is the collapse of Republican grassroots precinct capabilities.

Mass mailings, robocalls, and ultimately the Internet, eviscerated precinct operations.  Everything was top down, nationalized, and driven by huge amounts of money.  The era of dedicated volunteer precinct captains being a civic “welcome wagon” for new voters ended.

Republicans also refused to embrace new voter behaviors.  They fought or dismissed early voting.  Instead of using this opportunity to mobilize working families to vote on weekends they asserted, “Our voters come out only on election day”. In 2012, millions of Republican votes were lost to this obtuse myopia. Thankfully, others are finally calling for a return to electoral basics. http://m.washingtonexaminer.com/article/2545990

Republicans also lost credibility with their ill-conceived and poorly positioned voter ID programs.  Anyone who has contested elections knows that voter fraud occurs either in the initial registration or in the final counting, NOT when voters cast their ballots in polling places.  Republicans focused on the one part of the voting process that works.  The result was embarrassing laws, rhetoric, the taint of voter suppression, and charges of racism.

STOP BEING HYPOCRITES!
Ultimately, to win in 2014, Republicans need to regain the rhetorical high ground on a wide range of public issues.  The only way they will achieve this is to stop being such blatant hypocrites.

- Republicans cannot keep “cherry picking” budget cuts.  Waste is waste no matter which agency or program is to blame.

- Republicans cannot oppose all tax increases.  There are outrageous government subsidies that only exist because lobbyists gave money or favors to public officials.  It is in the best interest of to expose and end these revenue boondoggles.

- Republicans cannot cheer on George W. Bush’s and the Republican Congress’ spending binge of 2001-2006 and then rail against the Democrats current spending spree.

- Republicans cannot attack President Obama’s over-use of surveillance when the over reaching laws, processes, and technology were developed by President Bush and enthusiastically supported by “conservatives” in Congress and the media.

The other problem Republicans face is the Diaspora of Bush Administration functionaries who permeate the media and its think tanks.  The Diaspora’s primary purpose is to unquestioningly defend every utterance, policy, and action of the Bush era.

There has been much discussion about leaving Reagan behind in order to redefine and reposition conservativism and Republicanism in the 21st Century.  Many of those promoting this are Bush alumni who only want to supplant one time warp with their own.  Only by sanctifying Bush 41, Bush 43, and future permutations of the Bush dynasty, can they look in the mirror every morning and ignore their epic mistakes that ruined at home and abroad and wrecked havoc on the Republican and conservative movements.

To win big in 2014, and lay the ground work for victory in 2016, Republicans must tell voters that they will reverse the last 14 years of mistakes not just the last six.

Republicans have a huge challenge and an equally large opportunity.  Obama’s countless missteps and lies opened an historic electoral door.  Much work needs to be done before Republicans can walk through the portal.

Posted by Scot Faulkner at 3:36 PM