The Law of Attraction and How to Win Elections 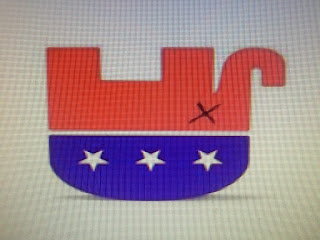 [Editor’s Note: In normal times a rational Republican Party would be taking full advantage of the chaotic failures of the Obama Administration and making substantial strides toward victory in 2014 and 2016. However, these are not normal times and the Republican Party is far from rational. Apocalyptic conservatives have decided it is better to kick over the existing political table than to construct an alternative one. This fixation on the negative and silence on viable alternatives is tearing apart the GOP.]

Michael Losier offered this definition of the Law of Attraction in his book Law of Attraction, Wellness Central Edition: “I attract to my life whatever I give my attention, energy and focus to, whether positive or negative.”

One thing about the Law of Attraction: it has spanned centuries, geographic locations, religious beliefs, and business backgrounds to survive, intact, as a concept in which it is acknowledged that we can control our own destinies through our thoughts. Although recent scientific advances provide explanations beyond people's intuitive feelings about their thoughts and outcomes, it is a fact of life that over time people have recognized that the way they think would influence their lives. This also happens when a group of people assemble and focus on a common theme (e.g., let’s elect this person!). It is not Karma (cause and effect); it is directed thought which can produce a positive outcome.

Different authors have stated how powerful the mind is in different terms. For example, Aristotle said: “The energy of the mind is the essence of life.” And Norman Vincent Peale said: “Change your thoughts and you change your world.” These are just generalized statements where the author recognized the power of the mind and thinking. And how about Maya Angelou: “If you don't like something, change it. If you can’t change it, change your attitude.”

So, how does this affect the Republican Party? The Tea Party, which could be a very positive force, is hell-bent on promoting the most conservative people they can find and are tearing the fabric of the Party apart – regardless of whether they will win or not. What is the longer term strategy: to eliminate moderate Republicans or to win elections? With the 2014 elections looming, the Republican Party has to decide its fate: stop beating up on each other and focus on electable candidates. Like it or not, look at Virginia. Mr. Cuccinelli is probably a nice guy, but his conservative position hurt him. Look at New Jersey. Regardless of one’s personal feelings about Governor Christie, analyze his election success. He won in a Democratic state – and look at the demographics of the people who voted for him. He won votes from an electorate that the Republicans would like to think they are cultivating.

Nick Carey of Reuters reports: ‘If we have to get hurt in the polls in order to save the country from financial ruin, so be it,’ said Ben Cunningham, a long-time conservative activist in Tennessee involved in efforts to find a challenger for Senator Lamar Alexander. Really? Are you listening to yourself, Mr. Cunningham? It’s not about the polls; it’s about electability and winning the contest. Indiana’s Senate seat was lost in 2012 after Senator Lugar was ousted in the primary by a Tea Party candidate; who won that time? Not the Republican; a safe, incumbent’s seat was lost. There are other examples of the Republicans losing sight of the end game: keeping control of the House, capturing the Senate and putting a Republican in the White House in 2016. Let’s face it: if you are a true Republican, would you rather see moderate Republicans controlling government or liberal Democrats? And it’s not going to happen unless the Republican Party quits acting like a loose assembly of petulant children.


I’m going to offer a suggestion. Think positive thoughts about all of the Republican candidates. Focus on winning! This means that sometimes, even as a conservative Republican, you will have to bite your lip and vote for the candidate that can win – versus the candidate that is your favorite – for whatever reason.

Attraction requires you to visualize what you want, focus on what you want, and take action to attain what it is you want. The Law of the Attraction does not operate within a timetable. It is our current thinking which invokes the Law of Attraction. However, it works; and it will impact your life – positively or negatively. Republicans need to think positive thoughts; they need to put aside the intra-party fighting and agree on the common goal of winning elections. Agree to disagree, but do so constructively. And when the time comes, go to the voting booth and pull the lever for the Republican candidate. Failure to do so means there will probably never be a Republican president again – and fewer wins in the national races. The electorate has changed; the Republican Party better, too.

Donald G. Mutersbaugh, Sr. earned his Bachelor of Science degree from the University of Maryland and his Master of Business Administration degree from Mary Washington College. He is the former Associate Administrator of Information Resources for the U.S House of Representatives under Speaker Newt Gingrich.
Posted by Scot Faulkner at 4:26 PM

Today I want to show you a really absurd, but extremely effective "Manifestation Formula"

This will FORCE the universe to give you the life of your dreams - money, happiness, success, and more...

I am talking about the kind of life that most people only ever fantasize and dream about.

The kind where you make more in a month than you used to in a year...

The kind where other people are inspired by you and want to impress YOU...

...Where you make your wildest dreams become a reality.

This secret will literally force the universe to give you all the tools that you need to create financial, emotional and spiritual abundance...

...Without hard work or struggle.

You'll achieve your wealth, health, relationships, and other personal goals...

...And life will all of a sudden get super exciting, you'll find it hard to sleep as you'll be so excited about each new day to come...

P.S. You will find yourself shocked and amazed the very first time you use this secret.