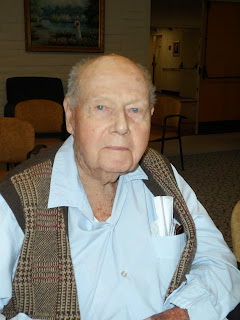 Ironically after all the effort to expand coverage, Obamacare pays doctors to deny care.

In the first place doctors who advise Medicare patients against treatment can sign up to keep half the savings as a kickback.

Second, hospitals which talk Medicare patients into hospice, or out of coming back to a hospital, keep as much as $265,000 for each readmission they avoid.

Medicare has become adversarial, because doctors and hospitals get these kickbacks from cutting care. As long as Democrats refuse all amendments of Obamacare and Republicans insist on complete repeal, the kickbacks will continue, and patients need to protect themselves by avoiding doctors who sign up for kickbacks, and by hiring a nurse-advocate in the hospital, just as we hire a lawyer in court.

My father was 98, active, and articulate about choosing life, in five languages. He used a wheelchair, worked out twice a week with a personal trainer, read the daily paper and the Atlantic, enjoyed restaurants and the opera. Before retiring he managed the Latin American business operations of Time-Life magazines and books.

He was fragile, and by some standards not so old. Many people live and contribute past 100. Yet hospitals urged him to give up the life he enjoyed. They tried to talk him into stopping dialysis, which would have meant death in a week. They urged palliative care and a "do not resuscitate" (DNR) order, contrary to his advance directive. They kept him without food for three days because of suspected swallowing problems. They started blood thinners, which gave them a reason not to operate to drain his chest. They convinced his assisted living to evict him unless he went on hospice and gave up dialysis. He refused.

His doctors had not signed up for kickbacks, but they did face Medicare penalties if above-average numbers of patients returned to a hospital within 30 days. A readmission penalty after congestive heart failure, which he had, cost the hospital $35,000. After knee or hip replacement it would cost $265,000. They paid no penalty when he died. We heard, and anyone who might come back in 30 days starts to hear, "Not a good candidate for treatment... Side effects can be bad... Palliative care... Hospice... DNR." We knew nothing of readmission penalties and did not hire an advocate. The readmission penalties propelled both the refusal to treat him and the pressure on his home to evict him, which left him in despair, and in two days he died.

Hospitals cannot bill patients or other insurance for readmission penalties, so they face draconian costs for treating anyone who might come back in 30 days. We all know readmissions save lives. Dr. Hawking, Senator Byrd and President Mandela were readmitted when needed. But Senator Byrd used an Army hospital, exempt. Medicare staff and retirees use Maryland hospitals, also exempt.

A penalty for readmission can be a death penalty when it drives hospitals to avoid treating you. The American College of Surgeons has warned about "the potential that these hospitals will decrease their care for such patients, thereby creating an access issue" (letter to Medicare 6/14/13).

Medicare recommends death penalties in nursing homes too, for excess rehospitalizations. If that penalty is adopted, fragile patients would not be accepted into nursing homes, and if already there, would be urged to forego needed hospital stays.

Four published studies, from Veterans Affairs, New England Journal of Medicine, New York Hospital Association, and Medicare's own contractors at Yale, show as you would expect, that when fewer patients return to hospitals, more patients die. Three other studies, from an Oklahoma hospital, Kaiser, and Healthgrades, show that patients with palliative care or DNR die sooner than they would otherwise, so signing up patients leads to more deaths and fewer readmission penalties.

Medicare knows its penalties can lead to more sickness and death, "We are committed to monitoring … increased patient morbidity and mortality" (Federal Register 8/31/12 p. 53376). Its contractor has already found higher deaths. Any NIH study would monitor deaths and stop the experiment when death rates rose. Medicare does not.

Medicare is explicit that "end-of-life/palliative care" is an "efficiency" which should increase kickbacks to doctors (2009 p.6). MedPAC, a Congressional agency, recommends "hospice use and the presence of advance directives" as methods to decrease rehospitalizations (2012 p.195). MedPAC did the original unpublished 2005 study justifying readmission penalties. They said 76 percent of readmissions within 30 days were "potentially preventable," but the study was based on experimental software without clinical reviews (2007 p.108).

If you think 20%-55% of your care is unnecessary, you will do fine, since kickbacks are designed to cut your care that much. Be aware that quality controls are minimal. Or if you have no interest in life, the system will oblige. My mother had cancer and died on hospice at age 88. But people deserve to choose. Seniors have paid for insurance and count on treatment without the government micro-managing hidden penalties and kickbacks to sway professionals against their wishes.

With research you can avoid doctors who sign up for kickbacks. Readmission penalties are harder to avoid. Your own doctors do not manage your hospital stay. Staff doctors do, and they need the hospital to be financially strong. Patients need to hire independent expertise during hospital stays, to get full information. We cannot trust hospitals which face $35,000-$265,000 penalties.

A bipartisan majority should repeal the penalties. In the meantime Medicare needs to exempt more patients, as it now exempts people under 65, or without Part B, or in Maryland. It should exempt patients over 95 or 100, since they are most at risk of improper pressure to die, and they are too few to affect the statistics. Medicare should also offer demonstration programs to exempt patients who pay an extra premium, or patients willing to have a copay for every hospital stay. Currently only the first stay in each 60 days has a copay, of $1,200. These alternatives reduce Medicare costs, while leaving hospitals willing to readmit when needed.

Paul Burke is a researcher who has analyzed data for HUD, Congress' Office of Technology Assessment, and the UN Development Programme. He manages a watchdog site, Globe1234.com, and is not connected to the health care industry. He has declined Medicare for himself to avoid its interference in his healthcare.