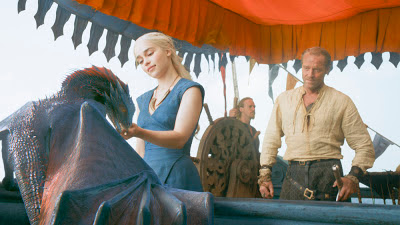 This article was published on the History News Network
http://hnn.us/articles/how-game-thrones-mirrors-modern-geopolitics

The Season Three finale of Game of Thrones coincided with my recent meetings in China. There is more in common than first meets the eye.

Game of Thrones is HBO’s outstanding fantasy drama about how royal families on the continent of Westeros intrigue against and slaughter each other. At the end of Season Three the key combatants remain oblivious to rising outside threats. The White Walkers, or basically “ice zombies”, are massing in the icy north looking to expand their feeding territory. Far to the south, across the Narrow Sea, Daenerys Targaryen is forming a massive army and building a cadre of capable advisors. She is waiting for the day her three dragons are large enough to lead her campaign to invade Westeros and reclaim the “Iron Throne”. A multi-year period of mild weather, the “long summer”, is about to give way to an equally long and devastating winter. Only a few whisper, “winter is coming”, and even less are preparing.

In the “real” world, America’s leaders intrigue against and politically slaughter each other. Myopia reigns supreme inside the Capital’s Beltway. Daily micro-battles over tactical issues are echoed in Lilliputian debates among hyperpartisan pundits. Like their Westeros counterparts, America’s political, economic, and media elite are oblivious to rising outside threats. This is not about terrorists, it is about BRICS.

BRICS are five major emerging economies that formed a cooperation pact in 2011: Brazil, Russia, India, China and South Africa. With the exception of Russia, BRICS are all developing or recently industrialized countries. Their common attribute is they all have large, fast-growing economies. This is allowing them growing influence on regional and global affairs. As of 2013, the five BRICS countries represent almost 3 billion people, with a combined nominal GDP of $14.8 trillion, and an estimated $4 trillion in combined foreign reserves.

BRICS are not always in agreement. Notably, China and India have serious border and water rights disputes. However, they collectively represent a major economic and trade force in the world. In many ways they are like the mercantile powers of the 17th Century. At that time, England and the Netherlands established global trading outposts, developed their merchant infrastructure, and built economic capabilities that soon encompassed the world. While the Netherlands was content to dominant trade, England leveraged its mercantilism to become the dominant strategic power for over three hundred years.

BRICS are following in these historic footsteps. China is methodically locking up strategic minerals and port facilities throughout Africa. China already holds the rights to most of Afghanistan’s mineral resources. It is fully content to have American coin and blood provide the security for Chinese miners. President Xi Jinping’s recent tour of the Americas strengthened his country’s presence in America’s “backyard”. His tour was topped off by Nicaragua awarding a Chinese company a 100-year concession to build an alternative to the Panama Canal. This will have profound geopolitical ramifications. China is also preparing to assert its highly expansive version of rights to islands and territorial waters throughout the Pacific rim.

BRICS strategically flexing their collective new muscles starkly contrasts with America’s nonexistent global economic strategy. It did not have to be this way.

In 1980, Ronald Reagan had a detailed strategic plan. His plan was to eradicate the Soviet Empire, end the threat of global Communism, and free millions of people from bondage. He masterfully and methodically implemented his plan succeeding beyond even his inner circle’s expectations. It was a combination of overt and covert active measures, coordinated with Britain’s Margaret Thatcher and Pope John Paul II. Together, they formed a “big three” that was far more globally effective and positive than World War II’s FDR, Churchill, and Stalin.

The problem was that so much planning and execution went into ending global Communism, little effort was spent on what happened next. For all the rhetoric about a “new world order” after the fall of the Berlin Wall, precious little actually occurred. After World War II the United Nations and countless strategic meetings, such as the Bretton Woods Conference, reshaped the world. America’s Marshall Plan in Europe and MacArthur’s counter part in Japan rebuilt ravaged parts of the globe, but also established viable markets for U.S. goods.

Presidents Bush 41, Clinton, Bush 43, and now Obama have been content to let America’s economy drift through the “peace dividend” and the information revolution without a strategic game plan. 9-11 opened a large rabbit hole where Bush 43 and his NeoCons squandered coin and blood on ill-advised, ill-conceived, and poorly realized foreign adventures. Today America is over extended politically, militarily, and financially. At home, our strategic drift since the fall of the Berlin Wall has led to hyperpartisan bickering over increasingly minute matters. The rise of the TheoCons within the Republican Party have reopened debates about science and reason that were resolved centuries ago, further diverting attention from strategic global issues.

Now in 2013, America is like Westeros, every day introduces new micro-conspiracies that diminish and divert attention from the real issues. America’s role in the world and its future as an economic power are drowned out by politicians and pundits fixated on whether Paula Dean should have a Food Network show. In the meantime, the BRICS’ “little dragons” and “ice zombies” are growing in strength. Washington politicians would learn more from following HBO fantasy dramas than Cable “news” talk shows.

[Scot Faulkner served as Chief Administrative Officer for the U.S. House of Representatives. Spent the month of June in China as advisor to the International Scholar Laureate Program. http://citizenoversight.blogspot.com/ ]

Posted by Scot Faulkner at 6:45 PM

You could also have mentioned that, after four years of Bush's campaign manager as Reagan's Chief of Staff, the Kitchen Cabinet moved out of the White House into the Executive Office Building (out of sight, out of mind), and few if any of those involved in the original, successful planning in any position to have planned the second Administration, it was highly unlikely that it COULD happen. It was no accident that Bush's deal with Falwell occurred right around the middle of Reagan's first term (that was the first time I heard about it...IRS didn't start going after Falwell until 1984)...they were solidifying their power and hold over the Presidency whether the President in '84 was Reagan OR Bush.