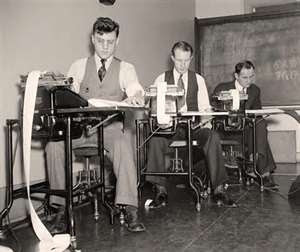 
In a previous blog titled “The Great Republican Hope: Political Hysteresis” (citizenoversight.blogspot.org, February 11, 2013), I presented the possibility that by just looking at the statistical relationships between Republican and Democratic presidencies over the years produced the possibility that a Republican would win the presidency in 2016. I began thinking about possible relationships between Democratic and Republican control of the Senate over the years. I decided to go back and analyze the data from 1861 to present regarding which party controlled the Senate. I once again have good news to report to the Republican Party: it may be their turn recapture control of the Senate in 2014 – at least statistically.

I previously decided to call this behavior Political Hysteresis: the tendency of an electoral outcome to vary about the central tendency of moderation based upon past and current candidates for the office of President. I am extending this definition now to include candidates for the Senate as a cohort analyzed by party (i.e., the Democrats and the Republicans). Granted, it is the candidate’s position and the Party's platform that drive the election. However, I would like to reiterate a simpler reason: hysteresis. “Hysteresis is the dependence of a system not only on its current environment but also on its past environment….To predict its future development, either its internal state or its history must be known.” http://en.wikipedia.org/wiki/Hystersis]

Consider the following summary detailing which party was actually in control: 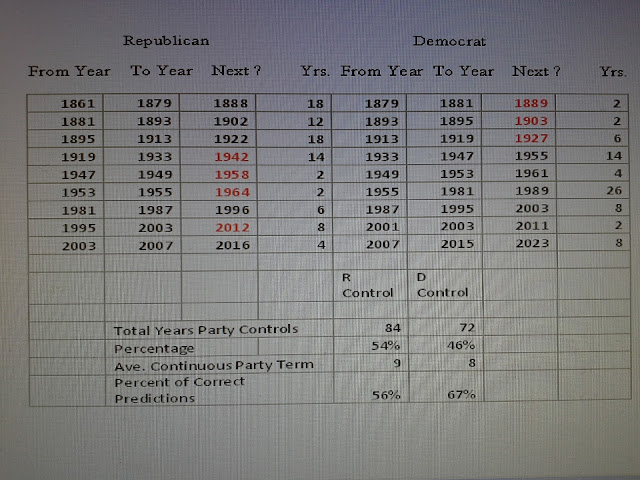 The matrix shows that Republicans have an average of 9 years of continuous term control; Democrats average 8 years (black is a correct prediction; red is an incorrect prediction). If you start in 1861 and add the average of 9 years to the ending year of control, you can correctly predict the Republicans in control subsequently 5 times, or 56%; using 8 years, you can correctly predict the Democrats in control subsequently 6 times, or 67%. (Note: I used ending years to predict the beginning year of control.)

To answer this question, I did some research and found the following discussion of extreme interest: Twenty-one of the 35 seats up for election are now held by Democrats. Moreover, most [sic] the states that will be casting ballots for the Senate in 2014 are Republican leaning: 7 of the 21 Democratic-held seats are in states carried by the former Republican presidential nominee, Mitt Romney, while just one of the Republican seats is in a state won by President Obama.

I would encourage everyone to read the complete analysis by Nate Silver. It is excellent! He continues:

Are the conditions favorable enough to make Republicans odds-on favorites to gain six seats and win the Senate majority? Not quite. Six seats are a lot to gain, and Republicans are at risk of nominating subpar candidates in a number of races. But it would not take all that much to tip the balance toward them….

Summing up the possibilities across all 35 Senate races yields a net gain of four to five seats for Republicans, just short of the six they would need to win back the majority.

However, the margin of error on the calculation is very high at this early stage…. If Republicans swept all the “lean” and “tossup” races, they would gain a net of eight seats from Democrats, giving them a 53-to-47 majority in the 114th Congress. If Democrats swept instead, they would lose just one seat and would hold a 54-to-46 majority. Considering the uncertainty in the landscape, estimates from betting markets that Democrats have about a 63 percent chance of holding their majority appear to be roughly reasonable.

It is more than just a little bit exciting to see Political Hysteresis at work projecting a 53 to 47 Republican majority when one of the greatest American statisticians and psephologists, Nate Silver, opens the door to the possibility of a Republican win in 2014 – by the same numbers!

Posted by Scot Faulkner at 3:00 PM