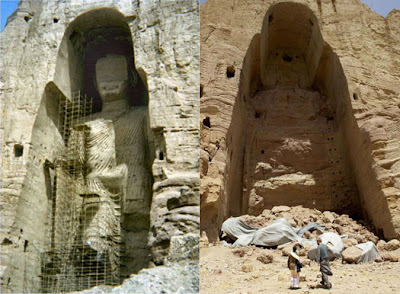 The following article was published on the History News Network
http://hnn.us/articles/losing-our-national-historic-parks-and-our-memory

Unfortunately, every day ’s history is also being wantonly destroyed.  These touchstones of our national identity are not being leveled by Taliban tanks, but by developer bulldozers.

is in the middle of commemorating the 150th Anniversary of its Civil War and the Bicentennial of the War of 1812.  It is heart breaking to watch these events against a backdrop of impending threats to core historical properties and viewsheds.

“Sprawl and commercial development are threatening the historic sites where our nation was forged and shaped,” Rep. Rush Holt (D-NJ) recently said.  “Each time a historic battlefield is replaced with a parking lot, a chapter of American history is obscured, and future generations lose an important window onto their heritage.”

Thirty acres of ’s history are lost each day.  Over twenty percent of ’s battlefields are already lost forever, of the remaining 3+ million acres only fifteen percent are protected by National Parks. [3] While additional acres are protected by state and local parks and by private organizations, the threat to ’s collective memory remains tragically real and immediate.

On September 11, 2012 the U.S. House of Representatives passed H.R. 2489 reauthorizing and expanding the American Battlefield Protection Program (ABPP).  This legislation also covers Revolutionary War and War of 1812 battlefields. Since 1999, the program’s matching grants have helped save more than 16,500 acres of historic sites in 14 states. [4]

The ABPP is currently seeking public comment on its latest report, which details the threats to 383 Civil War sites (Deadline October 12, 2012). [5] Unfortunately, detailed reports and a matching grant program are too little too late.

What is needed is a priority comprehensive federal initiative to save ’s memory.  This should be embraced by leaders across the political spectrum.  Liberals can rally around open spaces and preservation.  Conservatives can rally around making sure patriotic sacred ground and sites that establish ’s exceptionalism remain intact and in context for future generations.

Step One – Identify the land.  The ABPP has already identified core and contributing battlefield land in detail.  Groups such as the Civil War Trust have gone further to identify ownership parcel by parcel.  This information, along with data from local historical groups, should be compiled into both a national map and a set of battle-specific “metes and bounds” setting the stage for Omnibus Battlefield Boundary legislation.

Step Two – Create and pass Omnibus Battlefield Boundary legislation, which would expand the boundaries of existing national parks to encompass all battlefield land.  Where National Parks (battlefields, historical parks, monuments) do not currently exist, establish national historic areas that authorize cooperative agreements with state, local, and private entities to preserve this land. These arrangements would be similar to the Shenandoah Valley Battlefields National Historic District. [6]

Step Three – Authorize and appropriate sufficient funds within the Department of Interior’s existing Land & Water Conservation Fund to purchase all the battlefield land.  The current state of ’s economy prevents state and local government, and private groups, from buying land.  Only a fully funded federal effort will meet preservation needs before it is too late.

Conservatives will balk at this program, but they should view it as stimulating the economy by jump starting the real estate market and family farms.  Most battlefield land is near urban areas and will vanish under developer bulldozers once the real estate market returns (current predictions are for normal sales activity by 2014 and a return to January 2006 market conditions by 2020). [7] Many farmers view their undeveloped land as their 401k investment.  Why not provide them with the ability to cash-in and at the same time save history?

Property rights conservatives will want to avoid eminent domain and have land bought from willing sellers at market rates. The main problem is that, by law, the federal government has to pay appraised value instead of asking price.  While appraisals prevent fraud and extortion, they do not reflect the fact that many of these battlefield properties are “under water” – worth less than their original purchase price or their current mortgage.  There needs to be a way to create clearly documented and reviewed waivers that allow federal realty officials to purchase battlefield land over and above appraised value. Congressional review and/or Federal Register publication with public comment prior to finalizing sales contracts could avoid problems.

Fiscal conservatives will be concerned about increasing the ongoing operational costs for this newly preserved battlefield.  Most unprotected battlefield land is agricultural.  The National Park Service could lease this land back to farmers, thus generating revenue while preserving the land. As this land is contiguous to existing Parks, existing Park personnel would monitor the land.  They probably drive by much of this land while monitoring existing Park acreage anyway.  Additional funds for archeology and public access/interpretation would be decided via normal Park management processes.  The main intent of this legislation is to preserve battlefield land while the realty market is stagnant.  This land will be lost forever once the realty market returns.

Step Four – Mandate a sense of urgency with the National Park Service and provide focused leadership to make sure this mandate is promptly and properly implemented.  This is fundamental to the success of this initiative because too many Park officials mouth preservation platitudes while doing nothing.  It is well documented that some lower level functionaries find ways not to do their job, that too many front line Park officials refuse to think outside their existing boundaries when developing their General Management Plans, that career regional and national Park leaders play internal power games and squander resources on pet projects, and that officials at individual Parks remain unwilling to protect land within their existing Park boundaries from development threats.  Top to bottom reform of the National Park Service will take time and needs to be mounted as part of a general management effort.  It must not stand in the way of this timely rescue.

Historian David McCullough stated, "History is who we are and why we are the way we are." has a rapidly vanishing opportunity to preserve land on which its collective memory resides.  Failure to fully meet this current challenge will undermine ’s unique identity for generations to come.

Posted by Scot Faulkner at 7:17 PM