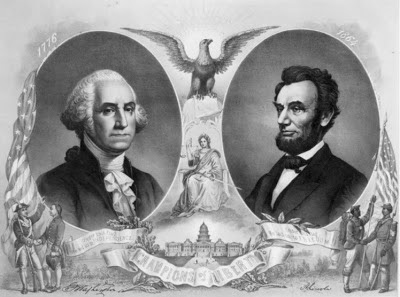 By popularizing “Presidents Day” in the 1980s to effectively combine the birthdays of George Washington and Abraham Lincoln, Americans lost both great men—and reduced them, tragically, to the same acclaim given to, say, Franklin Pierce and Warren G. Harding.

This shouldn’t come as a surprise: It reflects our tendency these days to shy away from claims about American greatness and exceptionalism, in favor of what otherwise are laudable American virtues like egalitarianism and equality. But not every president is equal.

It didn’t used to be this way. When I was young enough to receive American Heritage magazine in hardback, I read an essay that compared Washington and Lincoln, polar opposites, as our two greatest Presidents. Washington was great, it argued, because he set the boundaries and established the rituals of the presidency that are followed to this time. And Lincoln was great because he stretched the Constitution as far as he dared.

My respect for Washington was born in that moment; before that he’d seemed pretty dull. I was already deeply bound by affection and the drama of Lincoln’s life; his mind, temperament, and skill at law and politics were already known to me. He was, I thought then and think now, the only president who could have been as successful as Dickens had he chosen to pursue literary glory instead of a political life.

The same can’t be said of John Tyler, James Buchanan, and other small men who pursued personal or regional interests over our nation. Yet we have falsely raised them to the stature of the first president and the awe of the 16th. President’s day made the office the standard—not the performance of greatness within that office. We must bring back Lincoln’s Birthday so we can celebrate Liberty and the end of slavery, which made the world sit up and take note that here was a country unlike any other. We must bring back Washington’s Birthday to honor a man who set the bar for civilized and noble behavior. Both men epitomized singular shape and size, and gave us the gift of appreciating individual genius.

These days schools tend to teach our young out of a sense of grudging obligation, not in order to celebrate America’s rare victory of Light over Darkness. We sometimes say how exceptional we are, but classes in history and civics refuse to explain how or why.

Our country was born by ripping into shreds the curses of caste and class that had been the world’s lot forever. We realized a revolutionary doctrine that the ruler and the ruled could be one thing, that those who come from aristocratic bloodlines should have the same starting point as those who born to the most common.

Let’s trash Presidents Day. Give us George and Abraham, examples of how our democratic system endows common citizens with great power. Our children deserve that lesson—not just talk about American exceptionalism, but proof.