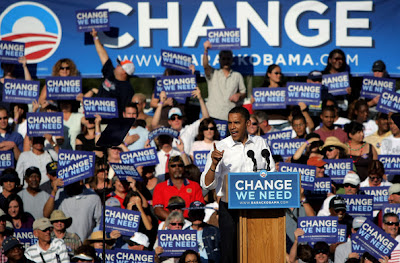 The media is anointing Obama our next President. However, before people get too enraptured with unified government under the Democratic Party think about what might happen to two of our most sacred rights – secret ballots and free speech.

One of the foundations of the Democratic Party is unionized labor. Senator Barack Obama and his Democratic colleagues in Congress have made passage of the misnamed “Employee Free Choice Act” a major priority. Secret ballots have been fundamental to our democracy since the 1850s. The National Labor Relations Act of 1935 guaranteed secret ballots in union representation elections.

Union representation has dropped to 7.5 percent in the private sector (membership public sector unions has actually grown to 35.9 percent). The drop in private sector unions has occurred because modern managers realize that collaborative management produces higher worker productivity and morale. Unions are marginalized in collaborative work environments. The drop in union membership reduces the amount of money unions use to support Democrats running for office. Therefore, the Democrats must find new tactics to increase union membership – even if this means reversing decades of federal labor law and destroying a fundamental component of our democracy.

The other target of the Democrats will be reinstating the misnamed “Fairness Doctrine”.

In 1987, the Federal Communications Commission (FCC) ended the “Fairness Doctrine”. This doctrine required equal time for all points of view on all television and radio broadcasts. FCC Chairman, Mark Fowler, and his colleagues foresaw the digital age and the rapid rise of cable television. They wisely decided that the marketplace for ideas should determine who is heard and how often. As more channel options arose, listeners and viewers would simply gravitate to those stations and shows that reflected their views or were naturally more balanced.

The ending of the “Fairness Doctrine” has stimulated the rise in political pundits and major news shows offering clear ideological perspectives. It has also allowed conservatives to virtually take over Talk Radio. This is where the Democrats want to change the rules. The liberals in Congress are not content to dominant the so-called “mainstream media”. They want eliminate the ideological marketplace and return to an era of limited choices. Liberals are certain that their left-skewed news shows will be able to masquerade as “objective” while conservative commentators will be relegated to highly controlled token appearances.

As Americans we should vigorously oppose changing rules that support our democracy. Neither Party should undermine free expression. The Democrats will be deservedly punished in 2010 and 2012 should they attempt such sordid power grabs.
Posted by Scot Faulkner at 7:30 PM

Except that the Employee Free Choice Act does not affect the secret ballot process. It just provides another option.

While the legislation does not mandate open ballots, it opens the door for unions to demand open ballots as part of their negotiations. Under this law an Obama Labor Department could rule that secret ballots are an unfair labor practice. Thus we go down a very slippery slope toward promoting strong arm tactics by unions. We are seeing what strong unions have done to the American auto industry.