How to Lose an Election 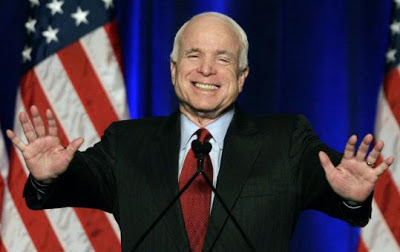 Does John McCain really want to be President? I ask this because he and his campaign are doing things that are hurting their cause.

Example #1
Friday night’s debate was hijacked by Jim Lehrer and Barack Obama. It was supposed to be about foreign policy, but the first 35+ minutes was about the economy.

A case can be made that the economy was important enough for McCain to consider canceling his debate appearance. That said, McCain should have steered the debate back to discussing America’s becoming a debtor nation. He could have also been more assertive regarding his doubts about the $700 billion bailout. He could have observed that most Americans are against such sweeping government intervention to basically bailout the financial elites without any strings attached. McCain needed to put more distance between Bush and himself. It is really okay to say you do not trust Paulson – most Americans don’t.

The debate’s detour threw McCain off his “game” while giving Obama traction. McCain did make up lost ground in the final portion of the debate, but the damage was done – Obama and his media allies could declare a tie. This was to be McCain strongest showing, not a draw that leaves Obama ahead by 4-6 points in most polls.

McCain could have created a “game changer”. Early and often Lehrer coaxed both candidates to directly address each other. McCain should have taken that opportunity to become the interlocutor. He could have laid-out his brief against Obama – directly – and forced Obama to look him in the eye instead of Obama using Lehrer as a crutch.

Example #2
McCain’s spinmeisters and surrogates need to become aggressive. They should not allow the mainstream media to get away with saying “McCain accused Obama of being the most liberal member of the Senate”. That is not an accusation – it is a documented fact! In every possible vote ranking, and in the assessment of objective sources like the National Journal, Obama is consistently identified as America’s most liberal Senator.

Example #3
I still do not know what McCain was thinking when we pulled the plug on everything mid-week. Presidents should be able to multi-task. They will have to conduct photo-ops with winning teams, do “grip & grins” with visiting dignitaries, while pondering major policy issues during an average day. He could have gone on David Letterman’s show and talked about serious subjects as he has before. That would have allowed him to roll out Sarah Palin (who was also in New York) doing her own version of a top ten list such as “things you didn’t know about Alaska”. McCain certainly should not have lied to Letterman about his schedule – Dave holds grudges and has a huge following among McCain’s target audience.

Example #4
Sarah Palin should not be kept under wraps. She should have been fully briefed after the convention and then sent off to barnstorm talk radio. This would have (a) helped her perfect her core talking points, (b) allowed her to reach far more people than she has during the last month. Over 13 million people tune into Sean Hannity's radio show, while only 7.5 million watch Charlie Gibson on the ABC Evening News. Mark Levin and Laura Ingraham garner 5.5 million listeners and 4 million consistently hear Michael Medved, while only 3.3 million watch Katie Couric on CBS; (c) you can "appear" on talk radio while not having to be in the studio. Palin could call into these shows and still travel to rallies or prepare for her debate; and (d) Conservative talk radio would have been a much friendlier venue. When the mainstream media groused about Palin not being on their shows McCain could have played his “liberal elitist” card. It is sad to see the McCain campaign mishandling their best asset.

Example #5
The McCain campaign and conservative pundits need to defend Palin. I challenge all the anti-Palin conservatives to play out every alternative convention scenario for the night of September 3. There is not one person who could have stepped out on that stage and generated a 14-point pro-McCain swing in the national polls. The only reason the polls swung back is the financial crisis thrust Bush’s dysfunctional administration back onto the front page and reminded people why the Republican brand had imploded. Those who have “buyer’s remorse” about not having Governor Romney talking about the economy forget how many Obama commercials featuring Romney’s attacks on McCain would have run by now.

Every politician has a mixed record – that is why Americans are so cynical about their government. McCain, Obama, and Biden each has enough baggage that they only wish they were as “clean” as Palin. Palin is a breath of fresh air because she actually saw that there were corrupt and incompetent Republicans and fought the establishment to remove them. That is unheard of in this era of the “partisan prism”. McCain should have positioned Palin to speak in detail about government reform, as this will be her portfolio if she becomes Vice President. She should have been discussing reform “swat teams” and reinventing government, instead of watching Obama preempt that issue.

As to Palin being unfit to govern – a random assortment of people waiting for a Metro bus could have run the country better than President Bush and his administration. Common sense and being grounded in a small town and small state culture will always trump Washington cronyism.
Posted by Scot Faulkner at 8:07 PM