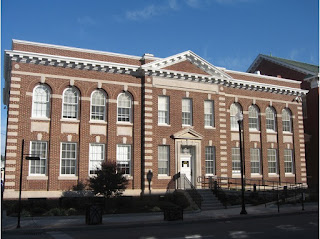 Local activists do not often get to celebrate as clear a win as those in Jefferson County did today.

The rededication of the Charles Town Jail marked a strategic victory for preservation. The victory was not just the saving of a historic structure, but was also about the triumph of the rule of law and open government.

The Charles Town Jail was built in 1918 by A. B. Mullet. This was the firm that designed and built the San Francisco Mint and the Old Executive Office Building next to the White House. It was unusual for a small town to have such a major firm design its jail. The building was a unique blending of state-of-the-art security for the jail, with late-Edwardian style for the jailer’s personal dwelling that comprised a third of the structure.

Unique history was soon added to this unique style. In September 1921 William Blizzard and three thousand unionized coal miners marched toward nonunion coal mines near Blair Mountain in southern West Virginia. There had already been bloodshed. On May 19, 1920, ten people were killed in a shoot-out between union organizers and private security agents from Baldwin-Felts in Matewan in Mingo County. This clash was brilliantly chronicled in John Sayles’ 1987 movie of the same name.

Fearing more bloodshed, and to throw the weight of the state behind the mine operators, West Virginia Governor Ephraim Franklin Morgan called on President Warren G. Harding to send federal troops to support the Logan County Sheriff’s deputies in stopping the march. Harding even sent a squadron of airplanes to strafe and bomb the marchers. A five-day “war” ensued leading to the marchers dispersing. Over 600 miners were indicted on various charges and fifty- four, including William Blizzard, were charged with murder and treason.

The treason trials were considered too emotional and political to be tried anywhere near the mine fields. They were held in the furthest courthouse in the state – Jefferson County. The new jail and numerous rooming houses in Charles Town were swamped with the defendants, their families, supporters and opponents, and the news media. In the end only a few were convicted, and an amazing chapter in America’s labor history came to a close.

The Jefferson County Jail is a major witness to our turbulent past. However, in 2000, the Jefferson County Commission voted to demolish the Jail stating it needed the space for expanding a gravel parking lot. The Jefferson County Preservation Alliance to Save our Heritage (JCPASH) was formed to stop the destruction. Numerous lawsuits and court hearings ensued. The preservationists asserted, correctly, that state law required public buildings to undergo a historical review prior to demolition. When this was upheld at the West Virginia Supreme Court, the County government asked local legislators to change the law to allow dedicated funds to be used to demolish the structure without further scrutiny. Thankfully, an accounting error co-mingled some of these funds. When this was unearthed during another court hearing the Circuit Judge blasted local officials for their treachery. Newly elected commissioners were then able to reverse the vote and the jail was saved.

It is the duty of every citizen to tell their public officials when they are wrong. JCPASH had to mobilize hundreds of local citizens, wage an expensive six-year series of lawsuits, and elect two new commissioners before the government complied with a forty-year old law. The rededication of the jail was also a recommitment to citizen activism and the need for everyone to remain vigilant and outspoken in the face of tyranny and illegality – at all levels of government.
Posted by Scot Faulkner at 8:26 PM