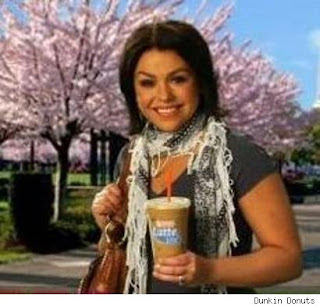 Americans need to get over their fear of foreigners.

A few weeks ago an advertisement featuring Rachael Ray wearing a scarf was pulled because of criticism that she was wearing “Islamic dress”. The advertiser claimed it wasn’t Islamic inspired, but pulled the ad anyway. The outrage from various commentators and bloggers was just not worth the hassle and potential consumer backlash.

While eating a Big Mac at the Frankfurt Airport I saw at least a half-dozen teenage girls wearing this same scarf. Yes, it is probably Islamic, as several of these girls spoke Arabic. But it was clearly a popular item as an American blond girl was wearing one on my flight from Cairo. So, the bloggers were right, the scarf has Arabic, and possibly Islamic origins. So what?

Teenage girls embrace new fashions on nearly a weekly basis. I can attest to this with my own fifteen-year-old. I imagine Rachael Ray’s handlers thought she should wear something that appealed to younger viewers. It’s called marketing and positioning of a brand.

Why are some people so afraid of an Arab scarf? What’s next – banning pita bread? Middle Eastern style has been a part of America since the early 19th Century. Victorian homes and turn-of-the-century advertising posters incorporated “arabesque” designs. Films like “Lawrence of Arabia” have captured our imagination. Since the first Gulf War, increasing numbers of Americans have served in the Middle East and brought back an interest in its culture. That is one of the reasons hummus is served at cocktail parties and why Arabic music has found its way into the songs of Sting, the Pussy Cat Dolls, and beer ads.

America is a “nation of immigrants”. We hold numerous celebrations relating to our respective countries of origin. So it is truly ironic that we are also the most parochial people to ever populate a world power. Aside from Hispanics, few Americans speak another language. Only a small fraction of our population travels abroad. Many of our high school students cannot find Canada on a map, let alone Qatar.

A certain amount of parochialism is one of our greatest attributes. Our civic culture focuses on our neighbors and our local community. It is the underpinning of our democracy and federal system. But America is part of an increasingly integrated, and interdependent, global system. Our greatest weakness is our inability to understand, cope, and leverage this phenomenon. This more severe parochialism has fostered a growing fear of foreigners and their cultures.

I am not advocating we give up our grounding in our communities in order to know the leaders of nations we may never visit. I am advocating that we realize that most of the world is a safe place filled with people who, while speaking a different language, worshipping a different deity, and wearing different cloths, are fundamentally like us. They love their families, they work hard, and they are focused on their own villages and communities.

Anyone traveling outside the US quickly realizes that our country is rarely on the minds of people around the world. It is rarely mentioned in major national and regional news media. That is not something to be feared, but is something to factor into the way we view the world. What is happening around the globe is not always about us. It is about maintaining civility and a level of liberty and security that allows people to freely interact and for commerce to be conducted.

One of the sad legacies of the Bush era is their inspiring Americans to be more fearful of the world. I remember in February 2003 when the Administration wanted Americans to cower in our homes surrounded by duct tape and plastic sheets. At that time my family and I were enjoying a cruise on the Nile. We felt safer there than we do walking near the U.S. Capitol.

Fear has become an integral part of politics in America. Questionable candidates have been elected and dubious laws have been passed in the name of protecting us from an array of bogeymen. Yes, there are psychotic despots who are doing terrible things to their countrymen, and there are religious nut-jobs who like to kill at random. There are ways to deal with this dangerous minority. Making Americans afraid of other cultures and assailing globalization is not how we should proceed.
Posted by Scot Faulkner at 2:07 PM