The Real Reason we are in Iraq 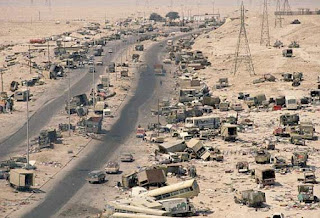 March 19 marks the five-year anniversary of America being in Iraq. It has also been just over seventeen years since a sequence of largely unreported events put us on a path to our current predicament.

At 4:00 a.m. “Saudi time” on Sunday, February 24, 1991 the U.S. launched a brilliantly designed and executed ground war into Iraq as part of “Desert Storm”. This end run around Iraqi forces in Kuwait (Operation Deep Strike) stands along side Austerlitz and Chancellorsville as one of the great battle maneuvers in history.

Only a handful of military and intelligence officials admit to what happened next. Several of them have confirmed these details to me and they are verified on a few websites.

As Wednesday, February 27, dawned CNN and other news organizations ran extensive video of the Route 80 carnage quickly renamed the “Highway of Death”. Some reporters and commentators began to question whether the “Highway of Death” was a gratuitous killing spree. Colin Powell, Chairman of the Joint Chiefs of Staff, was disturbed by the “shooting gallery” scenes and by the negative turn of news coverage. He shared his concern with President Bush and key White House advisors.

Debates raged in the White House about finishing the job of encircling the Republican Guard at Basra and “cutting losses” regarding negative media coverage. One staffer suggested that a compromise might be to end the ground war the next day (Thursday, February 28) at noon “Saudi time” as that would be exactly the 100-hour mark. This was immediately embraced as a “great number for the history books”. At 9:00 EST that evening a cease fire was announced to take effect nine hours later (4:00 a.m. EST or noon “Saudi time”).

Ground commanders, including Desert Storm commander General Norman Schwarzkopf , were shocked at the news. Lead armor units were less than 20 miles from completing their encirclement of the Republic Guards near Basra. The cease fire halted their advance leaving a strategic gap through which the Guard units resupplied and reformed under the U.S guns. A provisional ceasefire was formally signed three days later on March 3, 1991.

Unfortunately, this provisional ceasefire allowed the Iraqi military immediate use of their airspace and required U.S. forces to begin their withdrawal from Iraqi territory. [ http://iraqimojo.blogspot.com/2006/11/ghosts-of-1991.html ]

Then matters got worse. On February 15, 1991, President George H. W. Bush issued statements calling on the Iraqi people to overthrow President Saddam Hussein. It was hoped that Iraqi generals and key Sunni leaders would use the war as their opportunity for an uprising. On March 3, 1991, the same day as a provisional ceasefire was signed, uprisings did occur, but among the Kurds in the north of Iraq, and the Shiites in the south.

Bush officials were concerned that the Kurdish uprising might ignite Turkish fears of a greater Kurdistan and the Shiite uprising might trigger Iranian intervention. U.S. officials decided the best policy was to stand by and watch as Iraq brutally suppressed both revolts, killing over 100,000 civilians. Iraqi armored units and supply convoys moved with impunity while Iraqi helicopters flew by U.S. forces on their way to strafe rebelling Shiites.

We need to remember these events as we mark the fifth anniversary of the current Iraq war. Many myths arose from the 1991 war including the “big lie” that we considered taking Baghdad. This masks the disastrous decision to arbitrarily end the war and allow the Republican Guard units to be resupplied and reform under U.S. guns. It masks the inane provisional ceasefire that prematurely reopened Iraqi airspace for military operations. And it masks the miscues of the Bush administration encouraging revolt only to watch thousands of civilians get slaughtered.

When we ponder why the current administration is so obsessed with Iraq, realize that it may have something to do with Bush 43 and Vice President Cheney (who was Secretary of Defense during Desert Storm) wanting to correct the mistakes of Bush 41. We are all paying the price for the mistakes of 1991 and may for many more years to come. “He will by no means leave the guilty unpunished, visiting the iniquity of fathers on the children and on the grandchildren to the third and fourth generations." Exodus 34:6-7
Posted by Scot Faulkner at 9:24 PM