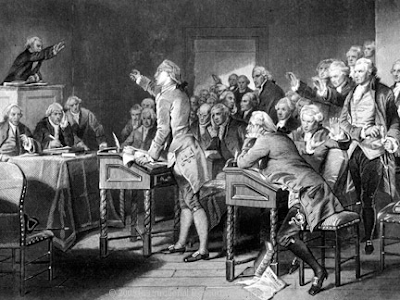 [Part of the 90 Day Study: Our Lives, Our Fortunes & Our Sacred Honor –

Exploring the Declaration of Independence]

Declaration of Independence: Grievance Number 4. “He has called together legislative bodies at places unusual, uncomfortable, and distant from the depository of their public Records, for the sole purpose of fatiguing them into compliance with his measures.”

Public meetings and public records have been fundamental to representative government since its inception.  They are the basis for resolving differences, forging agreements, and holding public officials accountable.  They are integral to a free society.

It is not surprising that the British Crown’s assault on these fundamentals is among the top Grievances listed in the Declaration of Independence.

The escalating protests over onerous and draconian British Colonial policies and taxes crested with the “Boston Tea Party” on December 16, 1773.  Sons of Liberty activists dumped over a million dollars (in 21st Century value) of tea into Boston Harbor.

Lord North, the British Prime Minister (1770-1790), retaliated with harsh measures to suppress dissent and disrupt the culture of self-government, which he viewed as the root cause of the chaos.

On May 2, 1774, North declared Massachusetts was "in a distempered state of disturbance and opposition to the laws of the mother country."

The move to Salem had the intended effect of forcing Massachusetts’ legislators to travel and find food and lodging in a small town of 1,600 instead of among the 16,000 population of Boston.  The infrastructure for supporting legislative operations were nonexistent (stenographers, printers, legal offices, media, and messengers).

Worse, there was no provision for moving any of the colony’s official records to Salem.  Any research or reference entailed a day’s travel each way from Salem to Boston and back again.  It achieved the British goal of “fatiguing them [legislators] into compliance with his measures”.

Similar actions were taken against the elected assemblies in Virginia and North Carolina.   North Carolina’s legislature was forced from their colonial capital of Brunswick to meet in New Bern.  In Virginia, Royal Governor, Lord Dunmore, dissolved the House of Burgesses and refused to call them back into session.  In defiance of the Governor, the colonial representatives reconvened at the Raleigh Tavern in Williamsburg.  Patrick Henry’s famous “Give me liberty, or give me death!” speech was presented during another banned session held at St. John’s Episcopal Church in Richmond (March 23, 1775).

The dislocation and dissolution of these Colonial Legislatures led to the same disruption and “discomfort” experienced by Massachusetts’ elected representatives. The goal of punishing opposition and suppressing dissent was achieved by forcing elected officials into “places unusual, uncomfortable, and distant from the depository of their public Records”.  It certainly interfered with the colony's public business and prevented officials from "access to information necessary to conduct it". Eventually, all Colonial Governors dissolved their legislatures.

The British Parliament also moved to eradicate local town meetings because, “a great abuse has been made of the power of calling them, and the inhabitants have, contrary to the design of their institution, been used to treat upon matters of the most general concerns, and to pass dangerous and unwarrantable resolves.”  Ongoing local meetings were replaced by annual meetings only called with the Colonial Governor’s permission, or not at all.

A series of five punitive acts were passed by Parliament intended to restrict public discourse and punish opponents.  It was England’s hope the “Intolerable Acts” would intimidate rebellious Colonists into submission. The “Acts” ignited a firestorm of outrage throughout Colonial America.  More importantly, it generated a unity of purpose and inspired a willingness for collective action among leaders in the previously fragmented American colonies.

The First Continental Congress met in the Carpenters Hall in Philadelphia from September 5-October 26, 1774. All colonies, except Georgia, were represented.  They issued the “Declaration of Rights and Grievances” which established a philosophy of government, and list of contentious issues, that would be echoed in the Declaration of Independence less than two years later.

The delegates created the “Continental Association”, which invoked non-importation, non-consumption of British goods, and non-exportation of American goods to England until the “Intolerable Acts” were rescinded.

King George and Lord North responded with a major show of force in Boston.  As British troops became increasingly visible on the city’s streets, Governor Gage created a network of informants to identify and arrest dissidents.

Alerted to weapons being stockpiled in Lexington, Gage launched the fateful sortie that led to the “shot heard around the world”.