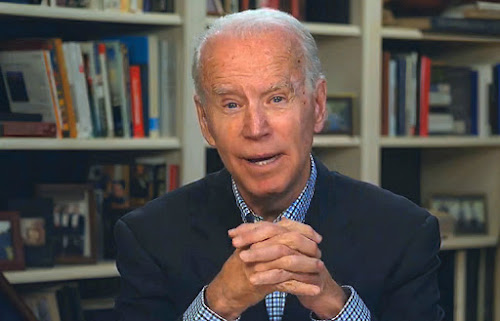 Well, it’s official: I can’t take it any longer! Ever since Hiden’ Biden has come out of his basement bunker and hit the road, the lies have become more egregious and frequent. Being a true blue American and trying to adapt to this new environment of falsehood has been excruciatingly painful.

I keep seeing these false news reports and polls and can only think one of two things. Either the Main Street media has completely underestimated the intellectual capacity of the American people or the American people have completely lost their collective minds. I see one poll that is completely contradictory to the rational man’s intellect – and I think okay, I’ll give them that one. Then on the next one I see another pole that is also completely upside down to reality, and I think – what in the world? So, you can imagine my angst when I see a whole page of completely irrational and completely incorrect conclusions about who is ahead of whom!

For example, somehow the Main Street media presents a “poll” that shows the people prefer Biden over Trump when it comes to law enforcement and nobody questions whether this flies in the face of reason. All of the cities that are burning and being destroyed are controlled by Democrat mayors and governors – doing nothing but defunding the police apparatus and reallocating the funds to other social endeavors – such as bailing out rioters. And need I mention that over 855,000 members of various police departments, sheriff departments, and the National Association of Police Organizations have endorsed President Donald Trump because they know he has their backs?

If you look at the various Main Street media polling websites, Biden almost is invariably ahead of everything except economics – they haven’t figured out how to credibly lie about that one yet! And recently – and reluctantly – these entities have had to concede that the race is tightening. I would submit that it was never as bad as they presented. Sure, Joe Biden could have been ahead in various issues at one time or another. But to somehow suggest that President Trump (e.g.) has not handled the coronavirus pandemic as best as any human could have done given what we knew and when – and even more ridiculously then submit that somehow Biden could have done better – puts all logic and understanding on its head! If that were true, then the Democrat party should get hammered on two points: first, what could they have done (give me something) that would have ameliorated the circumstances faced with this rogue virus from China? Second, if they really did have a better solution, time phased, according to what we knew and when – for them to withhold solutions that might’ve been better is treasonous in my mind because thousands of people have died needlessly. This has been a media driven story together with its perceived failure.

So, let’s take a look at the polling process. The polling organizations apparently refuse to update their models to reflect all kinds of changes in the way things are predicted. They apparently have never heard of such statistical concepts that validate data such as confidence intervals, correlations, and standard error. The data just doesn’t make sense. I’ve said in previous blogs that there have been several paradigm shifts in the electorate; I don’t really see any of these new variables incorporated in the results they produce. Even more worrisome is the way they choose their statistical sample; these supposedly random samples they use have allegedly been skewed by some of their sampling techniques. For example, several polls have been taken where the population sampled consisted of (e.g.) 25% Republican and 75% Democrat; how can you not get a skewed answer? (“Of course, the important question for pollsters who want to accurately reflect the partisan composition of the country is not “Are there more Democrats than Republicans?” but rather “What is the correct ratio of Democrats to Republicans?” The answer to this question depends, in part, on whether we are talking about the general public, the smaller subset who are registered to vote, or the even smaller group of people who are likely to vote in a given election (“likely voters”). Evidence suggests that the Democratic advantage is somewhat narrower among registered voters than the general public – and often even narrower among likely or actual voters.” https://www.pewresearch.org/fact-tank/2019/10/25/why-public-opinion-polls-dont-include-the-same-number-of-republicans-and-democrats/)

Then there is margin of error. Consider, “The concept of polling rests on the assumption that the opinions of the people sampled in the poll accurately represent the distribution of opinions across the entire population, which can never be completely true. The “margin of error” describes the uncertainty that comes from having such a small sample size relative to the size of the population. In general, the more people are surveyed, the smaller the margin of error. But this doesn’t take into account another key source of error called “biased sampling”. The fact that a poll samples a lot of people does not mean that it does so in the truly random fashion that would be needed to extrapolate results to the larger population. Unfortunately, many polls fall victim to a number of biases that significantly skew their results despite their small margin of error. The most common bias, known as convenience sampling, occurs when pollsters select people to survey using a convenient, but not entirely random, strategy.

“Another possible source of polling error is known as volunteer bias, wherein the people who volunteer their opinions to a poll do not represent the distribution of the entire population….

“Another tactic is for a pollster to copy off its neighbors…. The cheap polls may “herd” off stronger polls, tweaking their results to match them. This can make them superficially more accurate, but they add little value. Where there are better polls available, the cheap poll duplicates the results already in hand. Where there aren’t, the cheap poll may stray far from an accurate and representative sample of the race. Then there are the companies that have cheated in a much more explicit way: by fabricating data. There is strong evidence … there are more firms out there like them.” https://blogs.scientificamerican.com/guest-blog/where-are-the-real-errors-in-political-polls/

Trust me when I say the more you understand about the way these polls are conducted, the more you would be willing throw them in the trash – because that’s all they’re worth. Granted, as we draw closer to the actual election day, the polls will probably be more accurate. There are obvious reasons for that, but I’ll leave it to the reader to discern for themselves the overall topic of polling.

I needed to provide this background to get to the bottom line: what if you had to wager a substantial sum of money on who is going to win based on these polls? Would you do it? I know I wouldn’t! Instead, I would go to my favorite bookie and see what the odds were on each candidate! So, let’s look at that data over a comparable timeframe.

There are several websites that facilitate online wagering on election outcomes. The thing that is interesting to follow are the odds (over time) for each outcome – specifically, who is going to win the race for presidency? I looked at several websites, and several predicted that President Trump would win. Some said that he would lose to Biden, and in others the odds were even. One thing that was true for most of them was that the odds had switched from Biden winning to Trump winning and in all cases the odds were narrowing. One website even predicted that Trump would lose the popular vote, but the Republicans would win the election. Wouldn’t it be great if Trump lost the popular vote in two consecutive elections, but won the presidency in both cases (Electoral College outcome – there are odds on this, too!)?

One other note on this is: “What does this mean for Donald Trump in 2020? As mentioned earlier, Donald Trump [sic] is no longer the bookmakers favorite to win the 2020 election. However, in 2020 Donald Trump has accounted for 53% of all bets placed in the US election betting market. In the last month, his dominance of the betting market has increased to 59%. Therefore, if the recent trend of political betting events were to continue, we’d expect Donald Trump to win the 2020 US Election despite the odds suggesting otherwise.” https://www.oddschecker.com/us/insight/specials/politics/20200813-2020-us-presidential-election-odds-betting-history-suggests-donald-trump-will-beat-joe-biden

All of my life I have been advised that whenever I wanted to know the answer to something, always follow the money. Which do you think is going to be more reliable: fake news that generates pats on the back and an at-a-boy in the newsroom or somebody who actually has to be right in order to put food on the table? My final advice is: when you see a headline that says “Biden ahead by six points” is throw the paper in the trash and go look at a couple of gambling websites – see what the odds are and in which direction they are trending. You may even want to place a bet while you’re there!

Donald G. Mutersbaugh, Sr. earned his Bachelor of Science degree from the University of Maryland and his Master of Business Administration degree from Mary Washington College. He is the former Associate Administrator of Information Resources for the U.S House of Representatives under Speaker Newt

Posted by Scot Faulkner at 4:04 PM

Didn't Hillary lead in most, if not all of the polls in 2016? Another question is: what will the Democrats, the 'main street media' and the throngs of protestors do if Trump wins again? Prepare thyself.