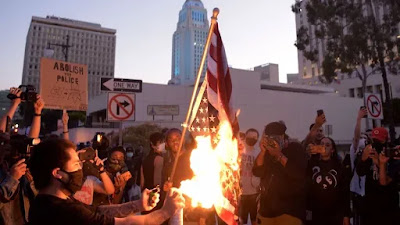 Erasing celebrating the 4th of July and replacing it with Juneteenth is the Left’s Holy Grail.

Denigrating the American Flag, removing our National Anthem, and ending the 4th of July are the Left’s trinity for destroying America’s civic culture.

Changing calendar references eradicates the old order to establish a new radical one. The Bolsheviks replaced Christian holidays with May Day (May 1) and their October Revolution (November 6).  The French Revolution zealots went so far as to rename the months of the year.

Making an obscure moment in the Civil War our new “more inclusive” national holiday is fundamental to shifting the inspiring narrative of America’s founding in 1776 to the darker, anti-American, narrative of the 1619 movement.

Just before the 4th of July, Senators Ron Johnson (R-WI) and James Lankford (R-OK) called for establishing Juneteenth as “a national holiday to remember the 1865 emancipation of slaves in the United States”.   They eliminate the Columbus Day holiday, because “as a holiday that is lightly celebrated, and least disruptive to Americans' schedules”.  Senator John Cornyn (R-TX) co-sponsored Juneteenth legislation with Rep. Sheila Jackson Lee (D-TX).

The moment Juneteenth is in and Columbus is out, the Left will move to eliminate the July 4th holiday as being just two weeks apart and “disruptive” to summer work schedules.

Nikole Hannah-Jones, the intellectual force behind eliminating the 4th of July and the 1619 movement, barnstormed cable news to assert, “Independence Day does not mean the same thing to everybody.  We are forcing white people to confront what this holiday has meant to black people”.

On one show, Hannah-Jones’ assault was supported by historian Jon Meacham, who reported that the 4th was “only about a document not about shaping a nation”, while Juneteenth is a fully inclusive culminating moment in America’s story.  They both recommended that Americans “evolve”, and to end the “divisive” and racist 4th in favor of the “more inclusive and accurate” Juneteenth:  “For generations we have looked at 1776 as our founding moment, our “nativity”, when it was actually 1619… For too long we have taught this one narrative that glorifies white supremacy, glorifies colonization.”

Attacking July 4th began on July 1, 2011.  That was when Harvard University released a study revealing that “children who attend July 4 celebrations are more likely to identify themselves as Republicans in life”.  The study observed, “The political right has been more successful in appropriating American patriotism and its symbols during the 20th century. Survey evidence also confirms that Republicans consider themselves more patriotic than Democrats”.

During the summer of 2019, the New York Times, armed with the revisionist history of Nikole Hannah-Jones, launched the 1619 history curriculum. 1619’s goal is to completely recast America as the most demonic, racist, destructive nation that has ever existed.  According to the 1619 narrative, America began when a ship with African slaves arrived at Jamestown during the summer of 1619.  Everything since is a steady march of white racism destroying dark skinned people and polluting the world with white supremist and white privilege dogma, as embodied in the Declaration of Independence and U.S. Constitution.

Since the 1960s, colleges and universities have indoctrinated students with anti-Americanism.  K-12 is the next battleground. A recent study found that 66 percent of high school students believe America is exceptional, and 70 percent look favorably on America’s history.  Only 47 percent of College students think America is exceptional, and 44 percent are favorable to our nation’s history.

The 1619 curriculum is already being used in over 3,000 schools.  Changing history to eliminate July 4th, and replacing it with Juneteenth, is a critical part of 1619’s anti-Americanism strategy.

Juneteenth is based on the false narrative that slavery in America ended on June 19, 1865.  That was the day a Union General marched into Galveston, Texas and announced the Civil War was over and the slaves being held in the region were free.

It took ratifying the 13th Amendment on December 6, 1865 to officially free all of America’s slaves.  Border states were not included in the Emancipation (Kentucky still had 40,000).  Over the next year, Federal officials had to personally enforce the Amendment as some slaveholders withheld news of Emancipation so their slaves could be used for additional harvests.

Elevating Juneteenth as the end of slavery and the Civil War is like celebrating the end of World War II based on Japanese soldiers surrendering on isolated Pacific islands in the 1950s.

Making Juneteenth a national holiday must be opposed at all costs.

Posted by Scot Faulkner at 3:14 PM