If Elected, I Promise to …. 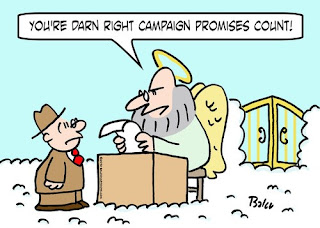 The following are agenda items that current Democrat candidates for the President have indicated they will pursue if they are elected to the presidency:

I could not even begin to estimate how many trillions of dollars any one or more of these items would cost the American taxpayer – wealthy and/or middle class. Some, like confiscation of guns ("Hell, yes, we're going to take your AR-15, your AK-47!") do not have monetary implications, but extreme social implications: can anyone say Civil War and loss of life?

How about all these different health plan alternatives: Medicare for all? Has anybody even attempted to explain how this would work? All of the candidates seem to be very vague – and with good reason! How much is this going to really cost? Eliminate the private insurance industry? I don’t think so! Protect and expand on Obama care? I guess we can put a few million more people at risk of losing their coverage!

How about a new tax, a wealth tax? That way you can tax a person’s income, tax their estate which may have grown in value due to their prudent investments as opposed to consumption, and in the meantime combat income inequality by once again taking from the rich and giving to the poor – without regard to their contribution to society?

Some have said that to accept a tax system that will never truly ensure that the rich pay their fair share (whatever that is!) will always have societal inequality. Funny: isn’t that the essence of capitalism? Isn’t it an economic system in which the factors of production are controlled by private owners for profit? “… the Ultra-Millionaire Tax, [is] a bold proposal to tax the wealth of the richest 0.1% of Americans.  The legislation, which applies only to households with a net worth of $50 million or more, is estimated by leading economists to raise $2.75 trillion in tax revenue over a ten-year period…. ‘It's time to fundamentally transform our tax code so that we tax the wealth of the ultra-rich, not just their income,’ said Senator Warren.” https://www.warren.senate.gov/newsroom/press-releases/senator-warren-unveils-proposal-to-tax-wealth-of-ultra-rich-americans


The other required reading is Federalist Paper # 68 by Hamilton.

“The Electoral College was created for two reasons. The first purpose was to create a buffer between the population and the selection of a President. The second as part of the structure of the government that gave extra power to the smaller states.

“The first reason that the founders created the Electoral College is hard to understand today. The founding fathers were afraid of direct election to the Presidency. They feared a tyrant could manipulate public opinion and come to power…

“Hamilton and the other founders believed that the electors would be able to ensure that only a qualified person becomes President. They thought that with the Electoral College no one would be able to manipulate the citizenry…

“The Electoral College is also part of compromises made at the convention to satisfy the small states. Under the system of the Electoral College, each state had the same number of electoral votes as they have a representative in Congress.” https://www.historycentral.com/elections/Electoralcollgewhy.html

Since the Electoral College process is part of the original design of the U.S. Constitution it would be necessary to pass a Constitutional amendment to change this system.”
https://www.archives.gov/federal-register/electoral-college/faq.html
This would require three fourths of the states to ratify the change which is highly unlikely since the smaller states would lose their power.

I have only briefly discussed a couple of the items that opened this article. I leave it to the discerning reader to examine each item more fully. I would ask only that you extend your thinking beyond the realm of your own existence and critically evaluate how each item would impact the country as a whole. While many of these candidates would try to have you believe that each proposal only affects a few people, they fail to address the synergies that would be developed from many of these proposals being implemented simultaneously.

They also don’t account for the interrelationships between the items nor the fact that there is a limited pool of resources available to tax to support each of these items. Taxpayer money will eventually give out. When this happens, of course, welfare and disability payments will stop; food stamps – no more; etc., and subsequently, a complete collapse of our economy at all levels.

It is amazing to me that the hatred towards President Trump is so great that many wish our country would have a recession because they think that would get rid of him. And all of this because he is doing what he said he would: Make America Great Again! And he is doing this in spite of, not because of any support from the Democrats who want him – and by extension, the country – to fail.

All of the Democrat Presidential Candidates are making empty promises; there is no way to implement their agenda. Even worse, if they succeed in implementing even parts of their agenda, the country will tilt more toward socialism and eventual failure as a successful capitalist society. President Trump’s new campaign slogans, “Keep America Great” and “Promises Made, Promises Kept”, say it all.

Normally, I would not worry about his reelection at all! But in today’s society, everyone believes that there are all these freebies to be had. For some reason, many believe that socialism is good – in spite of its abject failure whenever it is tried. My fervent prayer is that people enter the voting booths having separated empty promises from reality – and reelect President Trump!

Posted by Scot Faulkner at 5:39 PM