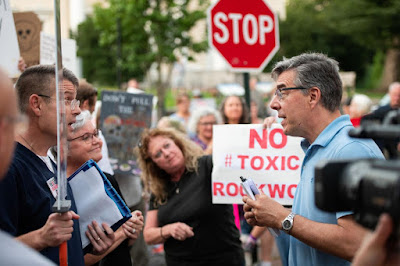 Voters of Jefferson County need to remember that Jane Tabb gave us the Rockwool mess.

Tabb was tasked with meeting with the West Virginia Development Authority and with Rockwool executives to assess the project. Her “ringing endorsement” of Rockwool was the basis for the 5-0 Commission vote to move forward.

It is time to elect Robert Barrat to the Jefferson County Commission. Our County needs someone we can trust to listen to all the people, not just foreign special interests.

Tabb is well documented in callously disregarding community opinion. Her actions have undermined and skirted official procedures and the law for many years.

Secret accounts, costly court battles, executive overreach, and a relentless desire to wipe out what makes our area unique is not the record that deserves another term.

Incumbent Tabb claims she is running for re-election “to be a voice of rational, thoughtful discussion and decision making”. When challenged, she simpers about being just a “simple farm wife”.

Tabb’s record is quite the opposite.

During her first term on the Jefferson County Commission, Tabb became obsessed with tearing down the historic county jail in Charles Town. Despite massive public opposition, Tabb led the charge to rid the historic district of a major contributing building. Tabb also led the way for the County Commission to ignore state preservation laws.

Thankfully, Carol Gallant, the late Jim Whipple, and a core of concerned citizens established the Jefferson County Preservation Alliance to Save Our Heritage (JCPASH). Major public rallies, countless letters to local editors, and hundreds of citizens voicing their opposition did not stop Tabb’s crusade against the jail.

The Jefferson County Jail was constructed in1918. It is on the National Register and Inventory of American Labor Landmarks. The jail was the pre-trial detention facility for William Blizzard, and other leaders of the “Coal Mine Wars”, prior to their treason trials at the Jefferson County Courthouse in 1922. Had she succeeded, Tabb would have destroyed a major landmark in American history, West Virginia History, local history, and American Labor/Worker history.

A six year legal battle ended with the West Virginia Supreme Court of Appeals siding with JCPASH. In the process, evidence exposed Tabb’s attempt to change state law to restrict historic preservation, and the establishment of a secret Commission “demolition fund”. Thankfully, sloppy bookkeeping co-mingled other County money with the fund, rendering it inoperable.

In it final ruling, the WV Supreme Court admonished Tabb and her colleagues and asserted, “it is incumbent upon us to insure that future generations may still appreciate the beauty and history of these many fine structures”. In spite of this final loss, Tabb tried to mount new legal moves, that were shut down by her Commission colleagues.

JCPASH earned the WV Preservation Alliance’s Most Significant Endangered Property Save award. Its leaders celebrated the reopening of a fully renovated and re-purposed county jail in September 2008.

Public outrage over Tabb’s imperious overreach to destroy history led to her defeat in 2006.

Local memories are short. Tabb returned to office in 2012 benefiting from Republican resurgence in the state and county.

Tabb immediately began where she left off, becoming an ally of Commissioner Walter Pellish in rezoning rural land along Route 340 East as commercial and heavy industrial. They ignored wide-spread public opposition, along with state and local efforts to preserve West Virginia’s tourism gateway. They moved quickly to preempt policy guidance from the Route 340 Gateway Study that was moving through public hearings under the leadership of Commissioner Lyn Widmyer.

We have the opportunity to finally end the career of County Commission Member Jane Tabb.

Robert E. Barrat is the clear choice for all who care about government integrity, openness, and accountability. The future health and well-being of Jefferson County is at stake.

[Scot Faulkner is a lifelong Republican, who served on the State Republican Executive Committees in Minnesota, Virginia, and Wisconsin, and on the staffs of two National Republican Conventions. He was named College Republican and Young Republican of the year. Faulkner was the Chief Administrative Officer of the U.S. House of Representatives. He served as Ronald Reagan’s Director of Personnel on the 1980 National Campaign, on Reagan’s White House Staff, and as a Reagan Executive Branch Appointee.]
Posted by Scot Faulkner at 10:13 PM