ART OF THE DEAL – KOREAN STYLE 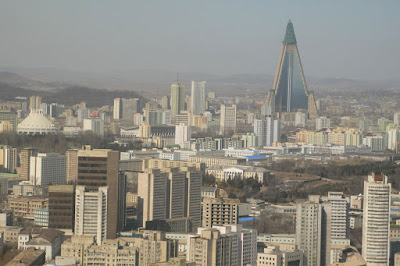 The Ryugyong Hotel, the tallest building in North Korea
(unfinished and unoccupied since 1987)


The Trump-Kim meeting could end-up being nothing or be the beginning of everything.


Destabilization of the Korean Peninsula, the Pacific Rim, the Middle East, and potentially the rest of the world is totally unacceptable. Something new and different had to be tried, short of an apocalyptic war. Trump’s “saber rattling” is part of his bare knuckled approach to business - intimidate then negotiate.


Modern China’s economic revolution happened because Deng launched “Gaige Kaitang” (Reforms and Openness). He broke away from the stagnating allegiance to Mao’s teachings in order to create his own form of market capitalism.


Trump, along with China and South Korea, could offer to facilitate co-prosperity in exchange for Kim totally dismantling research and development of nuclear weapons and missiles.


In fits and starts, North Korea has reached out for foreign investment and knowledge over the years. They have established their own mini-version of SEZs. The challenge is to create enough oversight and boldness to stimulate real economic reform and openness. The goal is creating China style reforms, instead of Lenin's New Economic Policy in the USSR during the 1920s, which was a cynical attempt to exploit Western naivete and steal resources.


South Koreans are realistic about co-prosperity. The Kaeson Industrial Region SEZ failed in 2013 because the North Korean government expected South Korean companies to act like parastatals and become another cog in Communism. The new North Korean SEZs must be based upon the lessons learned from Kaeson.


Trump could embrace and offer to foster expansion of the Choson Exchanges. North Korea is already sending some of their "best and brightest", on “Choson Fellowships”, to China, Indonesia and other Asian countries to learn about private sector management. North Korea needs western companies in its SEZs so Choson graduates can apply their new knowledge.


The Soviets failed when they tried to append capitalist principles to dysfunctional state-run industries and unrealistic five-year plans. North Korea needs to understand the truism that state-run companies will fail no matter how many outside ideas are introduced. Official statist principles absorb and destroy free market ideas like white cells attacking infection. Only through independent and viable SEZs will North Koreans realize the benefits of these early forays into the world beyond their borders.


President Trump could suggest that North Korea be open to South Korean partnerships to fully realize the potential of its vast natural wealth. North Korea has reserves of more than 200 mineral types distributed over 80% of its territory. Developing these natural resources could dramatically increase the wealth of North Korea. South Korea and China would benefit from access to these minerals. Revenue from mineral exports could fund improvements in the North's agriculture that would bring real nutrition to its people.


The bottom line is that the regional powers - China and South Korea - have a vested interest in bringing North Korea into the family of nations. Real economic development will improve the health and well-being of the North Korean people. Reuniting families and opening economic exchange would be the first steps toward reuniting an ancient culture, benefiting the region and the world. Openness and interaction offer North Koreans a better future than living in an isolated pariah state.


President Trump knows that the “art of the deal” is making sure all parties have a solid tangible interest in making the deal a lasting reality, and that any agreement must adhere to Ronald Reagan’s maxim: “trust but verify”.


[Scot Faulkner advises corporations and governments on how to save billions of dollars by achieving dramatic and sustainable cost reductions while improving operational and service excellence. He served as the Chief Administrative Officer of the U.S. House of Representatives. He also served on the White House Staff, and as an Executive Branch Appointee.]
Posted by Scot Faulkner at 4:14 PM