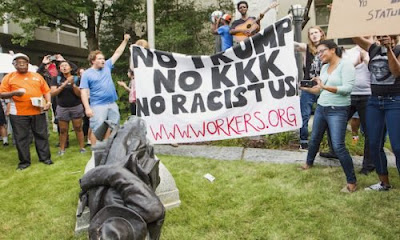 
America’s identity is in danger of being destroyed before our very eyes.


ALT-LEFT activists on the streets, in academia, the media, and government are wantonly assaulting the physical touch stones that support our nation’s civic culture.  There is no turning back from chaos if the connective fabric of our society vanishes.


America is unique.  It is a country based upon ideas - not geography, language, or tribe.  Our historic sites and markers ground us in who we are, and why we are.


History is about collective memory and frames of reference.  Statues and historic sites are there to commemorate and remind, not to celebrate. Knowing and discussing our origin is fundamental to a civic culture where shared values hold us together.  Civil dialogue with those we disagree is the structure that allows our institutions, our communities, and ourselves to exist.


Our Constitution is about forming “a more perfect union”.  This means America is always a work in progress.  The Constitution itself is the greatest “rules of engagement” for collective action that has ever been written.  Looking beyond ourselves reaffirms our nation and our individual and collective roles in it.


Recent actions erasing history are unraveling our civic fabric.  For one group to anoint itself as morally entitled to determine what should be saved and what should be destroyed is the very essence of tyranny and fanaticism.


World history has been saved by those who transcended their immediate impulse for destruction.  Spain’s Ferdinand and Isabella calmed their Christian fervor when they saw the wonder of the Alhambra.  Napoleon’s armies avoided destroying European cities and towns during nearly twenty years of war.


The Twentieth Century saw a disturbing shift in how history was viewed.  The rise of Communism and Nazism led to intentionally obliterating history on a strategic scale.  Worse, the followers of these dogmas made fabricating history a priority.  Destroying reality and then faking an alternative became one of the greatest threats to civilization.  Cultural treasures were lost to the ages as the Nazi’s raped Europe, the Soviets raped Eastern Europe, and Mao’s minions unleashed their Cultural Revolution.


The 21st Century brought a new wave of Islamic hordes whose primary mission is to destroy anything, and anyone, not sufficiently promoting their fanaticism.  From the Taliban blowing up thousand year old Buddhist statues, to ISIS smashing the Tomb of Abraham and leveling Palmyra, the erasure of irreplaceable historic sites and artifacts has known no bounds.


ALT-LEFT vandalism against statues they deem offensive is now threatening America.  The chorus of ALT-LEFT commentators from the media, academia, and politics has woven a tapestry of excuses justifying official and unofficial destruction and desecration.


America’s Civil War was complex and controversial in its genesis, conduct, and aftermath.  Our Civil War tore apart families, friends, communities, and the nation.  It killed 2.5 percent of the U.S. population and impacted all who lived during the war. Its ramifications ripple through America to this day.  The nuances of 21st Century American voting patterns, politics, law, culture, and language are better understood, the more one delves into Civil War history.


Arrogance and ignorance are fueling the current wave of mayhem.  The ALT-LEFT’s clarion call for ridding America of racist Southern symbols becomes indecipherable babble when people torch a bust of Abraham Lincoln, spray paint the Lincoln Memorial, attack a Joan of Arc statue, and deface statues of Catholic Saints.


There is clearly more going on.


Fanaticism is all about intolerance and silencing opponents.  It is all about indoctrination and erasing individualism.  Fanatics are not satisfied until they completely destroy independent thought.  Their dream is a “hive mind” - thinking and acting as one.  Like Bumble bees, ALT-LEFT, Islamic Terrorists, and Communists want to anoint one leader who is all powerful, surrounded by blind devotion.  Their goal is the end of civilization, the end of humankind as we know it.


The ALT-LEFT, and its supporters, have this bigger goal in mind.


George Orwell, a Socialist who grew to understand the threat of tyranny, sent us a timeless warning: “The most effective way to destroy people is to deny and obliterate their own understanding of their history.”

Eventhough I have my issues with Trump, he is 100% on target when he blasts the media - the points made in this blog are so relevant, yet there is not one word in the media about what truly re-writing history would mean. Even Abe Lincoln supported moving blacks to Liberia,with some members of his cabinet supporting this policy, others in his cabinet opposed as it would remove cheap labor and potential cannon fodder during war. However, in 1862 Liberia was recognised by the US (i.e. Abe Lincoln). Again racist or what?? Monroe and Madison were major supporters (Monrovia, capital of Liberia named after Monroe) of kicking out the blacks and sending them back to Africa. If that is not racist, what is? This insanity sweeping America may be surprising, but most surprising is the failure of the press to tell the truth, help the unwashed masses understand the consequences of their actions in the context of real facts.