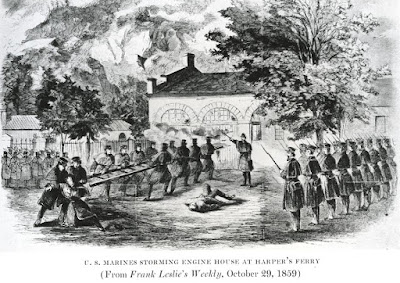 This has also appeared in: http://www.washingtontimes.com/news/2016/may/31/scot-faulkner-commemoration-conundrum/
Harpers Ferry National Historical Park is being celebrated with a Quarter featuring the fire house used by John Brown during his history changing October 1859 raid.
The image on the coin is an accurate depiction of the current fire house and its location in the lower town of Harpers Ferry.  However, the fire house and its location are very different from the actual building and setting that ignited America’s Civil War.
This is the challenge for historians and Park personnel.  In his famous book, “Sacred Ground; Americans and their Battlefields”, Edward Tabor Linenthal, provides examples of how we change our history by the ways we preserve and honor it.
Linenthal discusses placing monuments on the Gettysburg Battlefield, and removing the upper decks of the Battleship Arizona to create the iconic memorial at Pearl Harbor.  In these and other cases, our desire to honor the touch stones of America ends their purity.  These changes turn history into icons that become more relatable and impactful to future generations.
John Brown’s fire house is the perfect example of turning history into iconography.
The fire house John Brown and his followers retreated to on the Harpers Ferry Armory grounds was a very different building than the one we honor.
The belfry, the most iconic aspect of the fire house, did not exist at the time of the raid.  Drawings and lithographs from the period show no belfry or bell.  The cupola was added after the raid.  No bell was ever placed in the tower.  Civil War era photos show the tower, but never the bell.  Without the cupola, the fire house was more a shed for fire engines. It was referred to as the “engine house” prior to the raid.
The bell was promoted as the “second most famous bell in America” by Union veterans and early 20th Century historians as they assumed John Brown was going to ring the bell to summon rebelling slaves to his cause. Therefore, the Fire House Bell was tied to ushering in Lincoln’s “new birth of freedom” linking it to the Liberty Bell in Philadelphia.
The bell only rang for work shifts in a tower at the Hall Rifle Works, along the Shenandoah River near the current Route 340 Bridge.  Markings on the bell reference 1841. This was the bell the 13th Massachusetts Regiment removed and hid near Williamsport, Maryland after the Battle of Antietam in September 1862.  In 1892, these veterans recovered the bell from its hiding place while attending an encampment of the Grand Army of the Republic (GAR).  They brought it to their GAR Club House in Marlborough, Massachusetts.  Eventually, the bell ended its travels by being installed in its own bell tower in Marlborough’s town park.  The town reveres the bell to this day.
The fire house itself witnessed extensive travels and changes.  The Federal Armory was destroyed during the Civil War.  The Fire House, nicked named “John Brown’s Fort”, became just another derelict building on the Armory grounds.
In 1891 the “Fort” was sold for display at the World’s Columbian Exposition in Chicago.  It was taken apart and transported to the World’s Fair.  In the process, many bricks were removed as mementos.  The result was shrinking the building’s size by a third.  The Fort was then rebuilt backwards. The office was originally on the right side.  It is now on the left.
After the Fair, the Fort remained in Chicago because there was no home for it. The B&O Railroad had built a new set of tracks across the Armory grounds.  The Fort’s original site was now under a twenty-foot high embankment.
Eventually, the Murphy Family arranged for the Fort to be relocated on their farm in Harpers Ferry.  The farm was known as the Chambers Farm, which was the site of A.P. Hill’s nighttime flank march that forced the surrender of the Union garrison on September 15, 1862.
The Fort sat on the Murphy/Chambers field.  Commemorative plaques were installed on the walls inside the fire engine garage.
On August 17, 1906, the Fort was the site of another historic moment.  It was visited as a pilgrimage by Delegates from the Second Niagara Movement, the early version of the NAACP, to honor its role in Emancipation.  Additional plaques were added to its walls.
Three years later, Storer College , the first African American school for higher learning, bought the Fort and moved it to their campus on Camp Hill.  There it remained a campus focal point until the College’s closure and acquisition by the National Park Service.  In 1968, the Fort was moved to its present location just a hundred feet from its original foundation, marked by a small obelisk atop the B&O railroad embankment.
WikiMiniAtlas
Buy the coin. Visit the Fort.  Honor its role in America’s industrial revolution, abolitionist movement, Civil War, and African American history.  Also, ponder the building’s journey from fact to legend, function to icon.
[Scot Faulkner is President of Friends of Harpers Ferry National Historical Park]
Posted by Scot Faulkner at 9:01 PM