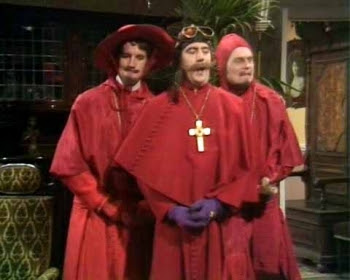 “No one expects the Spanish Inquisition!” is one of the great Monty Python sketches.

The bizarre utterances by Missouri Republican Senate Candidate Rep. Todd Aiken were unfortunately very predictable. It is what happens when Republicans allow big government Democrats to hijack their party.

On January 19, 1976 legions of pro-life Democrats helped Jimmy Carter win the Iowa Caucuses. They embraced Carter’s general remarks about making pro-life and faith key priorities of his Presidency. The day after this unexpected win, Carter aides Hamilton Jordan and Jody Powell sat down with these pro-life Democrats and told them Carter’s remarks were taken out of context. These activist Democrats felt duped and misled, but the Carter train had left the station, barreling toward his November victory.

In January 1978 several of these pro-life Democrats knocked on my door in Fairfax County Virginia. They were very open about their big government Democratic Party affiliations. However, they were also open about their motives. They wanted pay-back for Carter’s Iowa treachery. Their vehicle was to help enough conservative Republicans win in the 1978 elections to hobble the Carter presidency. If that worked, they were willing to help defeat Carter in 1980. All they asked in return was for the Republican Party to commit to limiting or reversing the Supreme Court’s 1973 Roe v. Wade decision on abortion.

Their meeting with me, and their subsequent meetings with other members of the Richard “Dick” Obenshain for Senate team, put into motion an historic tilt in the Republican Party. During the hard fought U.S. Senate nomination battle the pro-lifers delivered both in pro-Obenshain telephone calls and in massive turn-outs at county conventions. They helped the most conservative candidate win the nomination. On August 2, 1978, a tragic plane crash ended Obenshain’s life and campaign, leaving the door open for moderate John Warner to prevail.

The Obenshain campaign was only one test bed for pro-lifers and a broad collection of Christian activists. That same year, “big government” pro-lifers toppled the leadership of Christian Voice, and in 1979 founded the Moral Majority. The Christian Voice was part of a faith-based movement built with libertarian Christians who wanted to stop the federal government and activist courts from restricting freedom of religion and pressing a left-wing social agenda in public schools. Howard Philips and other faith-based leaders called for “defunding the left”.

However, while these big government Christians were willing to support “defunding the left”, they also wanted to fund and expand a faith-based activist government. During 1979-1980 this philosophical battle played out in weekly “Library Court” meetings under the auspices of Paul Weyrich. Howard’s sister, Susan Philips, and I were assigned the task of facilitating this group in the hopes of channeling the energy of these Christian activists into dismantling the liberal state not constructing a new theocratic one. We failed.

During the Reagan Administration, these Christian activists uneasily took a back seat to toppling the Soviet Empire and assailing big government. Instead, the TheoCons methodically captured state Republican organizations by the same methods they used for Obenshain and Reagan – they made countless telephone calls and turned out their legions to dominate Republican caucuses and conventions. By 1988, large swaths of the Republican Party’s field operations were run by big government Christians.

It was only a matter of time before all Republican candidates and office holders had to at least give lip service to the Christian agenda. Eventually, true believers, who actually wanted to expand government based upon their interpretation of the Bible, were in office at the state and local levels with sufficient numbers to aggressively move their agenda. This agenda included eliminating all abortions under any circumstances (including “Personhood” bills that limited contraception), legislating morality - especially anything to do with homosexuality, and bringing a faith-focus to public classrooms - especially anything that promoted the “young earth” version of creationism (the belief that the Earth is just 5,000 years old and that a literal interpretation of Genesis is the only accurate history).

The true conservative movement, and its core within the Republican Party, was driven underground. Being branded an abortionist or pro-gay was a political death sentence. The TheoCons pushed their activist agenda until, like Lenin, they “hit iron”. They never did. Emboldened, the more radical TheoCons began pushing blatantly anti-women policies and know-nothing science and still they did not encounter opposition within the Republican Party.

This race to the 10th Century culminated in Rep. Aiken’s making his obtuse statement and the Republican Party being pulled into a vortex of its own making.

Some Republican Leaders have finally pushed back, but is it too little too late?
Posted by Scot Faulkner at 3:23 PM