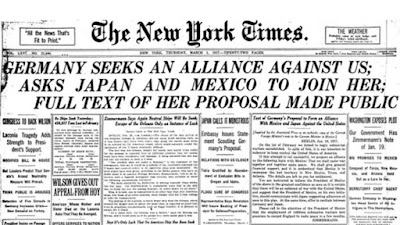 Germany officially admitted to sending the “Zimmermann Telegram”, which exposed a complex web of international intrigue, to keep America out of World War I.  It was this, and not the sinking of the Lusitania on May 7, 1915, that led to the U.S. entering the European war.

The Zimmermann Telegram was a message sent by Arthur Zimmermann, a senior member of the German Foreign Office in Berlin, to Ambassador Heinrich von Eckardt in the German Embassy in Mexico City.  It outlined Germany’s plans to support Mexico in a war with the United States should America enter the European War:

We intend to begin on the first of February unrestricted submarine warfare. We shall endeavor in spite of this to keep the United States of America neutral. In the event of this not succeeding, we make Mexico a proposal of alliance on the following basis: make war together, make peace together, generous financial support and an understanding on our part that Mexico is to reconquer the lost territory in Texas, New Mexico, and Arizona. The settlement in detail is left to you. You will inform the President of the above most secretly as soon as the outbreak of war with the United States of America is certain, and add the suggestion that he should, on his own initiative, invite Japan to immediate adherence and at the same time mediate between Japan and ourselves. Please call the President's attention to the fact that the ruthless employment of our submarines now offers the prospect of compelling England in a few months to make peace.

The story of how this telegram became the pivotal document of World War I reads like a James Bond movie.

America was neutral during the early years of the “Great War”.  It also managed the primary Transatlantic telegraph Cable.  European governments, on both sides of the war, were allowed to use the American cable for diplomatic communications with their embassies in North and South America.  On a daily basis, messages flowed, unfettered and unread, between diplomatic outposts and European capitals.

British Intelligence monitored the American Atlantic cable, violating its neutrality.  On January 16, 1917, the Zimmerman Telegram was intercepted and decoded.  de Grey and his team immediately understood the explosive impact of its contents.  Such a documented threat might force the U.S. into declaring war on Germany.  At the time, the “Great War” was a bloody stalemate and unrest in Russia was tilting the outcome in favor of Germany.

de Gray’s challenge was how to orchestrate the telegram getting to American officials without exposing British espionage operations or the breaking of the German codes.  He and his team created an elaborate ruse.  They would invent a “mole” inside the German Embassy in Mexico City.  This “mole” would steal the Zimmermann Telegram and send it, still encrypted, to British intelligence.  The encryption would be an older version, which the Germans would consider a mistake and assume it was such an old code it was already broken.  American-based British spies confirmed that the older code, and its decryption, was already in the files of the American Telegraph Company.

On February 19, 1917, British Foreign Office officials shared the older encoded version of Zimmermann Telegram with U.S. Embassy officials.  After decoding it and confirming its authenticity, it was sent onto the White House Staff.

President Woodrow Wilson was enraged and shared it with American newspaper reporters on February 28.  At a March 3, 1917 news conference, Zimmermann confirmed the telegram stating, “I cannot deny it.  It is true”. German officials tried to rationalize the Telegram as only a contingency plan, legitimately protecting its interests should America enter the war against them.

On April 4, President Wilson finally went before a Joint Session of Congress requesting a Declaration of War against Germany.  The Senate approved the Declaration on April 4 and the House of April 6.  It took forty-four days for American public opinion to coalesce around declaring war.

Americans were deeply divided on intervening in the “European War”.  Republicans were solidly isolationist.  They had enough votes in the Senate to filibuster a war resolution.  They were already filibustering the “Armed Ship Bill”, which authorized the arming of American merchant ships against German submarines. German Americans, a significant voter segment in America’s rural areas and small towns, were pro-German and anti-French. Irish Americans, a significant Democratic Party constituency in urban areas, were anti-English. There was also Wilson’s concern over Mexican threats along America’s southern border.

Germany was successful in exploiting America’s division and its isolationism. At the same time, Germany masterfully turned Mexico into a credible threat to America.

The Mexican Revolution provided the perfect environment for German mischief. Germany armed various factions and promoted the “Plan of San Diego”, which detailed Mexico’s reclaiming Texas, New Mexico, Arizona, and California. Even before the outbreak of the “Great War”, Germany orchestrated media stories and planted disinformation among Western intelligence agencies to create the impression of Mexico planning an invasion of Texas.  German actions and rumors sparked a bloody confrontation between U.S. forces and Mexican troops in Veracruz, on April 9, 1914.
After years of preparation, German agents funded and inspired Pancho Villa’s March 9, 1916 raid on Columbus, New Mexico. In retaliation, on March 14, 1916, President Woodrow Wilson ordered General John “Black Jack” Pershing, along with 10,000 soldiers and an aviation squadron, to invade northern Mexico and hunt down Villa.  Over the next ten months, U.S. forces fought twelve battles on Mexican soil, including several with Mexican government forces.

The costly and unsuccessful pursuit of Villa diverted America’s attention away from Europe and soured U.S.-Mexican relations.

Germany’s most creative method for keeping America out of World War I was a fifteen-part “Preparedness Serial” called “Patria”. In 1916, the German Foreign Ministry convinced William Randolph Hearst to produce this adventure story about Japan helping Mexico reclaim the American Southwest.

“Patria” was a major production. It starred Irene Castle, one of the early “mega-stars” of Hollywood and Broadway. Castle’s character uses her family fortune to thwart the Japan-Mexico plot against America. The movie played to packed houses across America and ignited paranoia about the growing menace on America’s southern border.  Concerns over Mexico, and opposition to European intervention, convinced Wilson to run for re-election on a “He kept us out of war” platform.  American voters narrowly re-elected Wilson, along with many new isolationist Congressional candidates.

“Patria”, and other German machinations, clouded the political landscape and kept America neutral until April 1917.  Foreign interference in the 1916 election, along with chasing Pancho Villa, may have kept America out of WWI completely, except that Zimmerman’s Telegram, outlining Germany’s next move, was intercepted by British Intelligence. It awakened Americans to a real threat.
Words really do matter.
Posted by Scot Faulkner at 5:11 PM