A Fire Bell in the Night: The Story of Maine Statehood (Part 1) 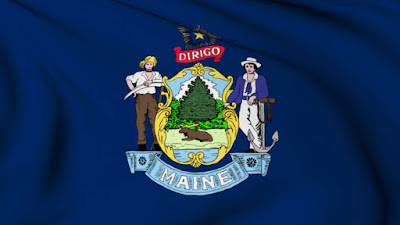 
Barely 30 years after the contentious adoption of the U.S. Constitution in 1787, the experiment in self-government and democratic republicanism that enraptured de Tocqueville and other noted admirers of the new United States of America was at grave risk of collapse. Maine’s aspirations for statehood were at the heart of the hullabaloo. It was in a wrestling match with Missouri for admission to the Union. In fact, Members of Congress representing the District of Maine, as it was known—then belonging to Massachusetts—voted against legislation that would have admitted their home as a state even after longstanding agitation in Maine for statehood.

So why, when at long last statehood was within reach, did these officials and many of those they represented object to legislation that would unlock the door to statehood? Their reasons are at the heart of why we are “one nation, indivisible” and how small, remote Maine helped preserve the U. S. of A. at a grave hour in its early history.

Earliest Maine: How the Story Began
The first Mainers have been traced to approximately 3,000 BC. They’re known as the “Red Paint People” due to their liberal use of red ochre in pottery and burial rituals. Native American tribes still extant in Maine are the Penobscot, Passamaquoddy, Micmac and Maliseet.

Why Maine is called “Maine” (the only one-syllable state) still isn’t clear. Some scholars say it was named after the French Province of Maine. Others suggest it’s from a maritime term for “the main” or mainland, to distinguish it from islands. Some sources claim Vikings visited Maine as early as 1000 AD, but the first recorded European was Italian explorer Giovanni da Verrazzano in 1524. Others later included Capt. John Smith (yes, the John Smith) for England and Samuel de Champlain for France.

Champlain fostered an attempted permanent settlement in June 1604 on St. Croix Island off Robbinston, Maine, opposite Bayside, New Brunswick. The colony failed within a year, most settlers felled by “mal de la terre” (scurvy). It was home to the first known Christmas celebration in the New World. The island, though in U.S. waters, is an International Historic Site, the only one in North America, jointly administered by the U.S. and Canadian governments.

Instead of Jamestown, Virginia, the Popham Colony in present-day Phippsburg, Maine, could’ve been the first permanent English settlement in the U.S.A. Sir George Popham and Sir Raleigh Gilbert led 120 English settlers to landfall at the mouth of the Kennebec River in August 1607. Other English settlers had reached today’s Jamestown in mid-May 1607. The Popham colonists started off strongly. They built the first commercial ship ever constructed in the New World, the pinnace Virginia of Sagadahock. This milestone was commemorated by a 1957 U.S. stamp officially recognizing the origin of shipbuilding in the U.S.  Shipbuilding has been a mainstay (no pun intended) of Maine’s economy over the succeeding four-plus centuries.

But the Popham Colony was doomed. After experiencing winter, half the surviving cold, hungry settlers grew disillusioned and fled back to England. Gilbert later received news of his father’s passing and needed to address vital family matters. He left for England, never to return.

Lacking leadership, the remaining colonists abandoned the settlement almost a year to the day after landing. Jamestown’s settlers hung on, though barely. Today, archeological excavations at both sites keep unlocking secrets about our country’s first English settlers.

Maine Grows
From Popham through the next 175 years, Maine ownership shifted from one royal grantee to another. The major promoter of Maine settlement was Sir Ferdinando Gorges, an English aristocrat later dubbed “The Father of English Colonization in North America,” though he never set foot in the New World. With Captain John Mason (a principal colonizer of New Hampshire), Gorges secured a patent from King James I in 1622 for vast territory in Maine. During  the next 50 years, disputes and squabbles over Gorges family holdings and competing land claims finally led Gorges’s grandson to sell all the property to the Massachusetts Bay Colony in 1677.

Maine grew slowly but steadily, yet not without incident. Devastating hostilities with Native Americans erupted periodically, and colonial conflicts took their toll. France considered all the land up to the Kennebec River, which bisects Maine, to belong to New France. Its farthest outpost was the present-day town of Castine, which see-sawed between French and British control for decades. In 1674, during a war between France and The Netherlands, Dutch naval forces captured Castine and environs, part of a grandiose venture to establish Nova Hollandia (“New Holland”). Maine suffered further privations during the French & Indian War (1754-63). Then came America’s War for Independence.

Mainers were distinguished soldiers, sailors and commanders in the Revolutionary War, and Maine was the scene of several battles. The most notorious was the infamous bombardment and burning of Falmouth—now Portland—on Oct. 18, 1775. The British Navy launched a far-flung campaign to punish seaports aiding the rebel forces, and Portland fell into the dragnet.

The fierceness and merciless intensity of the assault was widely reported throughout all 13 colonies and helped inflame passions against Britain. It prompted the Second Continental Congress to pass legislation authorizing what John Adams wrote led to “the true origin of the American Navy.” Earlier, in the first naval battle of the Revolution, patriots in remote Machias swarmed and captured the British sloop HMS Margaretta in June 1775. The dead and wounded on both sides were carried to Burnham Tavern, where the plot to seize Margaretta was hatched. The tavern, a National Historic Site, still stands.

The worst American naval defeat until Pearl Harbor occurred near the mouth of the Penobscot River as vessels augmented by ground forces sought to oust the British from eastern Maine (“New Ireland,” as Britain had declared it). A 44-ship armada, reinforced by some 1,000 marines and a 100-man artillery contingent commanded by Lt. Col. Paul Revere, left Boston for Maine in late July 1779. The colonials were no match for the Royal Navy. Most American ships not blown out of the water either were scuttled or captured, then hauled upriver to Bangor and burned. The surviving colonials fled overland with few supplies or weaponry. The “Penobscot Expedition” is among the darkest episodes in U.S. military history.

Many Maine communities were occupied by British forces. It underscored the indifference and incapacity of Massachusetts toward defending the region. Maine took years to recover, and louder rumblings for statehood began. The crippling Embargo Act of 1807 made matters worse, since Maine’s economy relied heavily on seagoing commerce. Then, the War of 1812 put many Maine communities under British boot-heels yet again. Its easternmost city, Eastport, wouldn’t even be liberated until 1818, three years after the war ended.

Two major (and other lesser) engagements occurred in Maine: the 1814 Battle of Hampden (near present-day Bangor), a humiliating U.S. defeat; and the electrifying clash between HMS Boxer and USS Enterprise on Sept. 5, 1813, just off Pemaquid Point near the mouth of the Kennebec River. The thunderous, furious, 30-minute slugfest, witnessed by scores of residents on shore and heard by many more, resulted in the capture of Boxer. It was a widely reported and celebrated boost for U.S. morale, memorialized by Portland native Henry Wadsworth Longfellow in his poem “My Lost Youth.” The remains of both ships’ slain commanders were ferried to Portland, then reverently buried side by side with full military honors.

The war convinced most Mainers that their area was a mere stepchild of Massachusetts and the state government was nonchalant about defending it. The earlier crippling attacks by the French and native tribes hadn’t been forgotten, either. Besides, travelling to distant Boston, the state capital, on official business was an arduous, time-consuming, risky and expensive venture. The push for statehood acquired new life.

Jeffrey Hollingsworth grew up in Belfast, Maine, and is a University of Maine alumnus. He is a past president of the Maine State Society of Washington, D.C., and principal founder of its charitable foundation. He is the author of Magnificent Mainers (Covered Bridge Press), a compendium of mini-biographies of 100 famous Maine natives. His articles have appeared in Honolulu and Down East magazines and in the Las Vegas Review-Journal, Portland Press Herald, and other periodicals.

Posted by Scot Faulkner at 1:40 PM