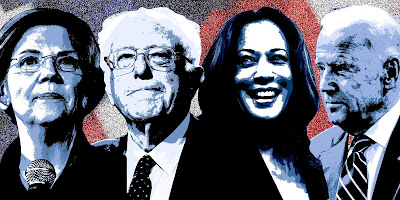 What is going on with the Democrat Party? The Kübler-Ross model attempts to explain the five stages of grief in terminal illness: denial, anger, bargaining, depression and acceptance.

[https://en.wikipedia.org/wiki/Kübler-Ross_model] The model was first introduced by the Swiss-American psychiatrist Elisabeth Kübler-Ross in her 1969 book On Death and Dying. It was inspired by her work with terminally ill patients. I started with this model since the Democrat Party seems to have disappeared down the rabbit hole of mental and terminal illness.

After the election of President Donald Trump, I was amazed by the amount of animosity and blind hatred exhibited by so many people. In all of my years of presidential change, I had never observed a complete lack of respect – not only for the President – but for the entire electoral process. What I am going to do is try to explain the political change process, where I believe the democrats are now, and where they might be going in the future. Let’s review the model.

Shock. The first stage of this process is shock. On election night if you watched the various networks which announced that Donald Trump had won the presidency you could see the look on their faces: gobsmacked. This was quickly followed by a room full of the walking dead.

Denial. Once it became evident that Donald Trump had actually won the presidency, it seems as if everybody proceeded into the next stage – denial: impossible, they collectively thought – something must have been misreported.

Anger. After denial, came anger: how can this be? How could he have possibly beaten Hillary Clinton? People felt cheated – after all, she was the queen on her way to the coronation!

Blame. After the anger had slightly subsided, everybody started pointing fingers and blaming anybody they could. Those stupid people – how could they? It was a terrible campaign! He wasn’t a politician; what business did he even have in running for the office?

Depression. Once it became evident that he was the President, depression set in as everybody began to realize that he was going to be the President for the next four years. Or maybe not – we can always impeach him! Most realists, however, settled in for the possibility he would fulfill his complete four-year term.

Acceptance. For some who had lived through one or more of the preceding stages of the Political Change Curve, they realized that acceptance would become the best way to move on – to eliminate the complete nonproductive existence they were living, the anxiety and angst they experienced every day, and to try to refocus their existence to look forwards instead of backwards. They realized that life goes on and they needed to make the best out of a bad situation.

Critical Analysis. This stage recognizes the need to improve, correct, and otherwise mitigate the intolerable environment – in other words figure out a way to correct the problem.

Rebuilding. This final stage occurs when all of the preceding stages have been experienced in part or in total: it is the actual implementation process of corrective action to bring about the desired success: control by the Democrats.

I believe that most of the Democrat party is stuck in the Fomenter stage: complain, misdirect, whine, etc. I think that acceptance may come within the next couple of months when the presidential hopeful herd thins out and a nominee emerges. I believe that the Fomenter stage will be sporadically interleaved with messages about the Democrat candidate (positive) supplanting fake news about Trump (negative).

Once this Acceptance stage is adopted, the Critical Analysis and Rebuilding stages will begin rapidly because a completely disgusted electorate will have to be recaptured to the party of fake news, years of Russian collusion and impeachment threats. “We should all be worried that more than 65 percent of voters think there is a lot of fake news in the mainstream media and that our major media institutions are seen as creating, not combating, our growing partisan divide.” https://nypost.com/2017/10/21/the-other-half-of-america-that-the-liberal-media-doesnt-cover/

Here is food for thought. Biden will not make the final cut (bunch of reasons). Neither will Bernie: always a bridesmaid. Plus, he, like Biden is an old, white, male – not a chance. A possible combo of Presidential hopefuls for the Democrat ticket: Elizabeth Warren and V. P. Kamala Harris? The Republicans will probably run Trump and V. P. Pence. But with two females or a minority candidate on Democrat ticket: who knows?  Maybe V. P.  Nikki Haley? Republicans may have to think outside of the box. With politics, who knows? Forget the polls. If it involves Trump, all bets are off!

Posted by Scot Faulkner at 7:42 PM

Although we may disagree on many subjects, Reverend Mutersbaugh, Sr. generally exhibits a wide range of intelligence. Thought out, researched and supported. Yet, in this “terminal illness” treatise of the present medical condition of the Democratic Party does not assist the public discord. President Trump’s numbers have always waivered in/around the 40% mark. Not a bad start. This “start” got him elected but by only 80,000 votes over 3 states. Not a wide margin by anyone’s count. Yet, what most peoples’ goal would be is to work on being President for “all” or at least a vast majority of the American people. Yet, no matter what Mr. Trump does (or doesn’t do) this 40% number seems not to rise. Albert Einstein’s quote seems to define perfectly his state of mind:

“Insanity: doing the same thing over and over again and expecting different results.”

PLEASE READ PLEASE READ PLEASE READ
Hello everyone, i would like to share my experience on this platform. i have been hearing of Blank Atm for a while and i applied through a few people but i was scammed, not until i found Mr George who saved me from scammers, i got my blank ATM card in 5 days after application and tried the encrypted card in an ATM machine and pos cash store to my greatest surprise i was able to withdraw $3000 and that was the daily rate i applied for. to be honest there is no risk involved the card is not traceable and has an infrared signal that blocks off CCTV during your withdrawals. i just payed my daughters tuition fee and cleared my mortgage debts, i am also richer and started a business that is doing fine. Mr George is really a life saver and he is very genuine. You can contact him with this email address: blankatm402@gmail.com
Best wishes