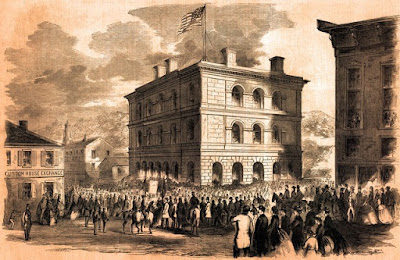 The origins of West Virginia, its current challenges, and its political dynamics are all embodied in a unique case decided by the U.S. Supreme Court in 1870.

In Virginia v. West Virginia, 78 U.S. 11 Wall. 39 39 (1870) 78 U.S. (11 Wall.) 39 two counties demanded to be reinstated into Virginia.  The Court ultimately prevented Berkeley and Jefferson Counties from returning to Virginia.  In the process, the Civil War and the battlefield origins of West Virginia were reviewed in detail.  Three Justices dissented, asserting that the birth of West Virginia was chaotic and violated the rights of local citizens in the Eastern Panhandle.

The three judge dissent reveals origins of the state’s current political tensions.  Citizens in the Eastern Panhandle continue to agitate against the highly centralized state government.

Virginian political leaders initiated a process to succeed from the Union in January 1861.  As a Commonwealth, Virginia gave deference to county representation.  Initially, the 152 delegates were solidly pro-Union.  However, old regional rivalries surfaced.

Delegates from the western counties of Virginia raised the issue of unequal political power with the eastern sections of the state.  This east-west divide had been simmering since the Virginia Constitutional Convention of 1829.  That State Constitution required a property qualification for voting. This disenfranchised many yeoman farmers in the more mountainous western counties. It also embraced counting slaves on a three-fifths basis for apportioning representation. Every county beyond the Alleghenies, except one, rejected the 1829 constitution, which still passed with overwhelming eastern support. The issue of regional inequality erupted again during the Virginia Constitutional Convention of 1850-1851.

On the morning of April 12, 1861, Confederate cannons opened fire on Fort Sumter in Charleston, South Carolina. After the Fort’s surrender on April 13, President Lincoln issued a call for 75,000 volunteers to forcibly return the rebellious states to the Union.  This was enough for the succession proponents in the Virginia Convention to prevail on April 17, 1861.

Successionists took matters into their own hands and attacked the Federal Arsenal in Harpers Ferry on the evening of April 18.

The Eastern Panhandle became the site for over 60 Civil War Battles.  Local communities descended into chaos as Union and Confederate armies competed for control of this critical north-south gateway.  Some towns changed hands dozens of times.

Pro-Union forces in western Virginia formed a separate state in June 1861.  Former Virginia Governor, and Confederate General, Henry Wise reported that, “The Kanawha Valley is wholly traitorous…You cannot persuade these people that Virginia can or ever will reconquer the northwest.”

Early in the Civil War, Union forces solidified control of northern Virginia (Arlington, Alexandria, and Fairfax). President Lincoln and the U.S. Congress merged this Unionist beachhead with the western counties as the “free” state of Virginia.

On August 20, 1861, Lincoln empowered this military-backed civilian entity to establishment the separate state of West Virginia from the pro-Union western counties that opted-out of the Succession Convention.

Under the terms of this Constitution, an inclusion vote was held on the first Thursday in April,1862, for citizens in the original forty-four counties, and those living in Pendleton, Hardy, Hampshire, and Morgan.

Significantly, no one in the counties of Berkeley, Jefferson, or Frederick voted on the matter, because:

"from the 1st of June, 1861, to the 1st of March, 1862, during which time these proceedings for the formation of a new state were held, those counties were in the possession and under the absolute control of the forces of the Confederate States, and that an attempt to hold meetings in them to promote the formation of the new state would have been followed by immediate arrest and imprisonment."

A series of laws were passed within the “free” state of Virginia authorizing the military-backed State Legislature to certify popular support for counties being added to the new state of “West Virginia”. On January 31, 1863, the “free” state of Virginia gave consent for the counties of Berkeley and Jefferson to be transferred to the State of West Virginia.  Frederick County, still under Confederate control, remained in the old Virginia.

At the national level, an enabling act was approved by President Lincoln on December 31, 1862 for admitting West Virginia, on the condition that a provision for the gradual abolition of slavery be inserted in the state constitution.

The West Virginia state convention reconvened on February 12, 1863, and passed a new constitution including the abolition provision. The revised constitution was adopted on March 26, 1863.  On April 20, 1863, President Lincoln issued a proclamation admitting West Virginia as the 35th state effective on June 20, 1863.

West Virginians in the eastern panhandle bridled under being forcibly included in a Union state.  Rumors were rampant that the owners of the B&O Railroad engineered their inclusion because they did not want their rail line going through a southern state.  This led to the 1870 Supreme Court decision. As recently as the 1990s, the Mayor of Charles Town, the county seat of Jefferson County, explored reopening the case.

Unlike its origins, West Virginia choose not to be a Commonwealth.  It remains one of the most centralized state governments in America, possibly for maintaining unity among entrenched regional interests.  Only recently did the West Virginia legislature authorize limited home rule for certain municipalities.  The power of counties to control growth and levy impact fees is less than 20 years old.

The state is challenged in finding its economic bearings as coal use declines.  It lacks internet access (West Virginia has the worst connectivity of the fifty states, while neighboring Virginia has the best).  Teacher unions and a bloated state bureaucracy make West Virginia one of the most expensive per-student school systems in the country, while consistently placing 49 or 50 in academic achievement.  The state steadily loses population, except for the eastern panhandle and the state Capitol of Charleston.