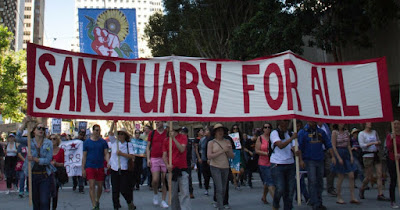 There is far more at stake in the November Mid-Term elections than whether or not Trump will be impeached, or America’s political center of gravity shifts leftward.

Voters will determine the survival of our federal republic.

America now has over five hundred jurisdictions, including states and municipalities, with sanctuary policies.

These policies are designed to protect illegal aliens from the consequences of the laws they violate. They bar local officials from enforcing federal law and cooperating with federal law enforcement agencies.

Democrats are the ones initiating, approving, and implementing sanctuary laws. They invoke the 10th Amendment of the U.S. Constitution, which limits federal jurisdiction and forms the basis of America’s federal system of government.

Democrats have a long history of hypocrisy with federalism. They ignore it when it furthers their goal of expanding federal regulation and control. They embrace it when they wish to either enslave humans in the 19th Century, suppress minority rights in the 20th Century, or eliminate the rule of law and national sovereignty in the 21st Century.

America’s federal system intentionally created tension between local and national authority, but also outlined the parameters of this contention. On March 1, 1781, just seven months before the British surrender at Yorktown, the Articles of Confederation went into effect. The Articles established a very weak and fragmented national government. Its flaws became immediately apparent. Alexander Hamilton explained in the Federalist Paper15:

“Each State, yielding to the persuasive voice of immediate interest or convenience, has successively withdrawn its support, till the frail and tottering edifice seems ready to fall upon our heads, and to crush us beneath its ruins.”

This impending disunion led to the Constitutional Convention in 1787. The U.S. Constitution remains the most brilliant and important document in human history. It outlines a timeless framework for addressing competing interests in the public sphere. It is a universal “rules of engagement” that has served America well, and guides freedom loving societies throughout the world. It balances the powers of states and the national government to establish, enforce, and administer law.

James Madison outlined this confluence in the Federalist Paper 39:

“The proposed Constitution, therefore, is, in strictness, neither a national nor a federal Constitution, but a composition of both. In its foundation it is federal, not national; in the sources from which the ordinary powers of the government are drawn, it is partly federal and partly national; in the operation of these powers, it is national, not federal; in the extent of them, again, it is federal, not national...”

In 1850, Democrats ignored Federalism by passing the Fugitive Slave Act. It declared that the Federal Government must enforce slavery, and the rights of slave owners, even in states and jurisdictions that had abolished it. Nicknamed the “Bloodhound Law”, it empowered teams of slave catchers to invade “Free” states. It added to growing sectional tensions.

After their defeat, Southern Democrats tried to reverse their defeat by demanding an end to reconstruction. Compromises that resolved the 1876 disputed election ended the era of African-American emancipation and empowerment in the South. Once again, Democrats invoked “states rights” as they methodically suppressed “freedmen”.

Starting with President Woodrow Wilson, Democrats choose to ignore “states rights” and federalism during their massive expansion of government regulation and activism. Republicans on the U.S. Supreme Court maintained the federal balance by striking down many of these federal intrusions.

In 1939, sufficient retirements and deaths allowed President Franklin Roosevelt to reshape the court and establish nearly eighty years of a center-left court.

Now, Democrats are embracing nullification of immigration laws to protect illegal aliens over security concerns and the integrity of U.S. sovereignty.

The 2018 Mid-Term elections will be the opportunity for voters to end this threat to America’s federal system by removing state and local officials who are trampling the U.S. Constitution. They can also embolden Republicans in Congress to end federal funding of these rogue regimes. The alternative is a national crisis not seen since the American Civil War or even since the collapse of the Articles of Confederation.

[Scot Faulkner advises global organizations and universities on healthcare reform and innovation. He served as the Chief Administrative Officer of the U.S. House of Representatives. He also served on the White House Staff, and as an Executive Branch Appointee.]

Posted by Scot Faulkner at 2:12 PM