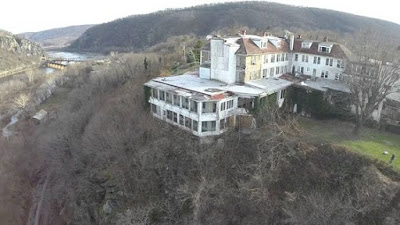 There are many scary issues surrounding the long running battle over the future of the Hilltop House property.  The collapsing Hilltop House structure is a favorite spooky site on Youtube.  Neighbors worry about the 81 police incidents that have made the Hilltop House the center for drugs, vandalism, and worse.

The latest scare is “by right”.  Spokespeople for SWaN Investors, the Hilltop owners, have used their ominous voice to threaten that terrible things will happen if they do not get their way.  Their current boogeyman of choice is that SWaN will build a new hotel on a 1.25 acre commercial site “by right”.

“By right” sounds scary, but it is just the legal term for “grandfathered”, a right granted to any property owner.  “Grandfathered” does not sound as scary, which is why SWaN avoids it.  The better to spook Harpers Ferry’s elected officials and townspeople.

In 2015, a major fire destroyed three commercial buildings in the lower town of Harpers Ferry.  These buildings are slowly being rebuilt “by right”.  It is totally legal to build “like for like” when something needs replacing.

Harpers Ferry is a National Historic District, administered by the Department of Interior and the President’s Advisory Council on Historic Preservation.  In order to comply with these national organizations, the town has very strict and detailed ordinances governing what can be built or rebuilt.  Architectural style and building materials must be approved to preserve the integrity of the Historic District.  The three buildings destroyed by fire are being rebuilt within these guidelines, even though they are “grandfathered” in terms of commercial use and their overall dimensions.

The Hilltop House owners can proceed, right now, with a “by right” or “grandfathered” hotel on their one and a quarter commercially zoned acres.  SWaN tries to make this sound terrible.  They are proposing an alternative that will develop an area nearly seven times larger, turning private residential lots into commercial space, and taking over three public streets.

SWaN’s “overlay district” is the real boogeyman.  Their “overlay” creates an area devoid of all ordinances and restrictions, which govern the town’s Historic District.

SWaN’s “overlay district” will allow them to build whatever they want in any style, shape, and size they want.  SWaN and its Town Council allies are already pushing for expedited permit approvals, some of which would be issued administratively without public notice or comment.

It is very scary in Harpers Ferry.  People shouldn’t worry about the ghosts of old, but fear the demons being created.

[Scot Faulkner has been an active member of the Harpers Ferry community since 1987]
Posted by Scot Faulkner at 9:25 AM

What is this article's point other than to spread lies? You people complain because there isn't a hotel then complain if someone tries to put one in because it doesn't meet all of your prestigeous standards. Get over it. The old hotel is not coming back and if someone isn't done soon that hotel will collapse into the river and possibly on tourists. The anchors have slid out of the side the hallways are buckling in. This fight has been going on long enough. They aren't going to suddenly swoop in and take your precious 5 feet of yard space up on that hill anymore than the previous hotel did. And there is only one public street that the hotel resides on and that's ridge street. The houses look out onto the main road, not sit on it. Every time I'm up there and talk to a resident from that street they have something negative to say because they aren't getting they're way. It's like a kid when he's told he can't have the candy and whines about it, except this time it's adults