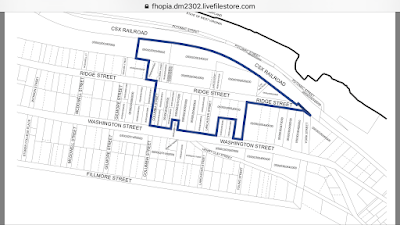 [NOTE: The Martinsburg Journal, specifically reporter Jeff McCoy, covered this highly divisive issue fairly.  However, earlier this week, perhaps under pressure, McCoy was reassigned and this letter was never published.  Once again outside developers are undermining our community and civic culture. Here are some of McCoy’s articles for background:

Harpers Ferry is at war with itself.  Not since the Civil War has the community been so divided.

Neighbors no longer speak to each other.  Threats of physical violence spring up on social media.  Public hearings degenerate into tears and shouting.  Armed police keep order at meetings.  Petitions and counter petitions circulate.  One lawsuit is now before the West Virginia Supreme Court of Appeals.  An injunction has just been filed in the Circuit Court.

What is going on?

Harpers Ferry is at a crossroads. Harpers Ferry is consistently listed as one of the most historic and scenic small towns in America.  Over 300,000 tourists, and numerous movie production companies, bring revenue to the town every year.  Even with this success, the area is missing a core element that symbolized it as a tourist mecca for decades.

The Hilltop House Hotel was a defining presence in Harpers Ferry since Thomas S. Lovett, an African American businessman and hotelier, constructed the hotel in 1888. The Hotel’s breathtaking views, great food, and service became a magnet for America’s elite. It was the Presidential summer retreat before Camp David. Alexander Graham Bell, Mark Twain, Carl Sandburg, and Pearl S. Buck were among the notables who stayed at the Hotel. In 1946, Hilltop House hosted the preliminary meetings which led the establishment of UNESCO.

Those glory days are long gone.  A series of owners let the Hotel deteriorate until it became a decrepit reflection of its storied past.  In 2007, SWaN Investors purchased the hotel and its adjoining properties, promising to restore the facility.

What has happened since SWaN’s arrival depends on one’s perspective.  Is SWaN a savior or a nefarious “Harold Hill” preying on citizens’ naiveté turning the “Music Man” plot into a horror story?

Harpers Ferry’s historic district is protected by layers of town ordinances complying with West Virginia Law and guidelines from the National Trust for Historic Preservation and the President’s Advisory Council on Historic Preservation.  This regulatory environment is intended to maintain the architectural integrity. Townspeople must submit detailed forms and drawings, sometime waiting up to two years to alter a rain gutter or doorway.

Larger projects, and new construction, must fit into Harpers Ferry’s comprehensive plan.  For projects not fitting, the town has the ability to issue a “Conditional Use Permit” that grants specific waivers in the face of a compelling community interest.

This is where the current civil war began.  SWaN refused to follow the town’s ordinances. SWaN refused to go through the Conditional Use Permit process.  SWaN demanded that a new “overlay district” be created, providing them the flexibility to do build what they wanted as big as they wanted.

Town officials, desperate for a new Hilltop House complex, bent to SWaN’s every whim.  Local citizens raised concerns: will SWaN actually build a hotel or flip the property to a buyer who could build a casino, luxury condos, or something else on the site?  SWaN did little to calm the fears, requesting that requirements for a business plan, and even the requirement for a hotel, be stripped from the draft overlay ordinance.

Town officials went further.  Instead of asking SWaN for proffers, town officials promised SWaN public resources like expanded water and free police protection.  The town has not issued citations for the eighty police incidents on derelict SWaN properties, while townspeople are cited for unmowed lawns.

This unequal treatment has raised concerns that something else is going on.  It is public record that SWaN’s owners have wined and dined town officials.  Rumors swirl of other favors or pay-offs.  Private meetings occur with SWaN.  Townspeople’s public comments are limited to 2-3 minutes while SWaN representatives are given unlimited time.

As the Harpers Ferry’s civil war begins its ninth year many wheels are turning.  2017 may see prosecutions over town finances, court rulings to enforce the rule of law, a voter revolt against the town government, and SWaN leaving.  SWaN’s supporters, which include the town’s elected officials, are hoping the new year brings them victory with the sounds of dynamite blowing-up the overlay district, clearing the way for a 450 car underground parking ramp, and a massive building project.

[Scot Faulkner has been a resident of the Harpers Ferry area since 1987].
Posted by Scot Faulkner at 11:15 AM