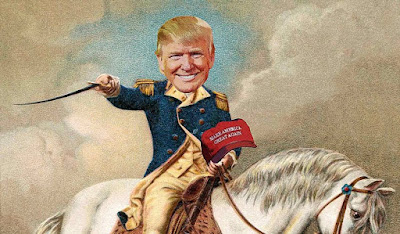 A new voter coalition has emerged.  A new era has begun.

Outside the circles of power in Washington, DC, New York City, and Hollywood, America has been a smoldering caldera of anger.  Since the fall of the Berlin Wall, America has been without a real strategy or leader to cope with the complexities of the post-Cold War World.

Throughout America, those not favored by government regulations and contracts, remain in the deep depression that started in 2007 and swallowed our economy in September 2008.

The 2016 election cycle is all about Americans rebelling against those who lied to them, and are exploiting the system.  This is Donald Trump’s America.

2016 is about removing those who caused the problem and starting anew.  That is why policy details matter less than the willingness to topple the current Establishment.

Americans in 2016 are seeking a defining moment of rebellion.

On April 19, 1775, militiamen in Lexington, and Concord, stood their ground against British Regulars who were on their way to confiscate rebel arms and arrest their leaders. The American Revolution had begun.

No policy manifesto or legislation existed when those heroic individuals rose-up against a collective evil.  The “Minutemen” did not debate alternatives, they decisively acted to end the established order.  It was fight first, sort out later.

Trump is leading a “back to the future” rebellion, transcending party and ideology.  Just like 1775, it is fight first, sort out later.

The moment these movements think like 1775 the Establishment is through.  Trump knows this.

The Tea Party movement arose in 2007 to protest policies of Republican and later Democrat elites.  This movement railed against out of control government spending and attacked the cozy behind the scenes deals between government elites and friendly business leaders.  They decried the “crony capitalism” of Bush’s Wall Street bailout, which rewarded instead of punished those who wrecked the American economy.

In 2014, North American workers united in an Inter-Continental Day of Action to protest the Trans-Pacific Partnership (TPP).  Many were veterans of the fight against the North American Free Trade Agreement (NAFTA).  Approximately 564 organizations, spanning the political spectrum signed petitions and organized protests.

Those who rallied to Pat Buchanan and Ross Perot in 1992, those who are rallying to Bernie Sanders in 2016, desire to end a system that benefits elites at the expense of everyone else.  Sanders remains in the race to bring his voice and his legions to the Democratic National Convention.  The platform fights and Sanders’ speech to the convention will be their high water mark.  Afterwards, they may support Trump in fighting the system.

In 1994, Newt Gingrich’s rival of “Reaganism” powered Republicans to retake the House of Representatives for the first time in forty years.  Pettiness and ego among Congressional Republicans derailed the revival.  Scandals and earmark abuses drove them out of office in 2006. Grassroots Republicans erupted in open revolt with the Washington Establishment.

The Establishment still does not comprehend what is happening, or they hope they can dampen rebellion and keep control of the status quo.

Trump is the only person left standing willing to smash their status quo.

Posted by Scot Faulkner at 3:16 PM