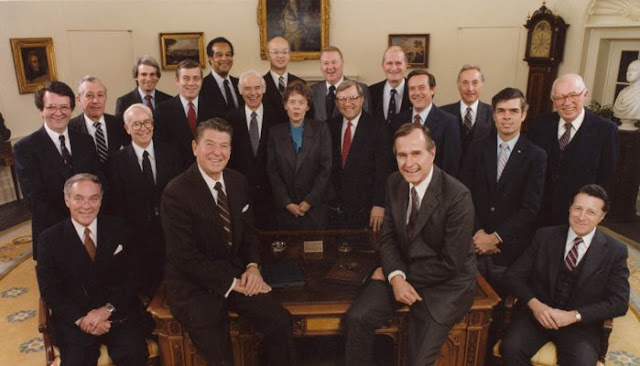 Americans across the political spectrum are clamoring for real change in Washington.  It is going to take real leadership – vision, strength, and a deep skepticism of the Washington elite – to turn rhetoric into reality.

How will the next President actually change the Federal Government?  The answer lies in who they know.

An incoming President finds they have a wonderful view from the “pilot house” of the “ship of state”.  They quickly realize there are no control connections to the ship and the engine room is still under the control of those loyal to the previous Administration.


The process of establishing control over the “ship of state” makes or breaks a Presidency.  It also determines the potential for actually changing the system versus simply managing the status quo.


A new President gets to hire 8,045 new people.  These positions are listed in the “Plum Book” published in November after each Presidential Election.  These positions are the Cabinet and Agency heads, their teams, White House staff, Ambassadors, and term appointments for federal regulatory boards.  An array of part time advisory board slots round out the “plums”.


In 1980, I served as Director of Personnel for the Reagan-Bush Campaign.  This led to helping plan, and administer, the Presidential Transition, ultimately heading clearances for Presidential Personnel in the Reagan White House.  This was a unique opportunity to participate in every phase of how a campaign becomes an Administration.


Reagan was the first to lead the modern conservative movement into power.  It was not an easy process.  Remnants of the defeated campaigns became part of the Reagan-Bush team for the general election.  This meant Reagan loyalists had to work with Bush, Connolly, and Dole staffers.  Jockeying for power occurred from day one.  While the original Reagan team prevailed, Ford and Rockefeller alumni (turned Bush loyalists), positioned themselves for the Administration to come.


After the Reagan landslide came an epic behind the scenes battle for the soul of the Reagan Administration.  Bush loyalists, led by James Baker, allied with the Presidential Personnel team headed by Penn James. James had run Nixon’s transition and was assailed by conservatives in 1969 for his shutting out ideological loyalists in favor of technocrats.  This battle was renewed as James and his team, which included Democrats and nonpolitical corporate head hunters, declared that experience trumped ideology.  Hundreds of Ford alumni poured into the transition and dominated appointment short lists.  Reagan loyalists derisively labeled them “retreads”.


It took the entry of Reagan’s Kitchen Cabinet, allied with Reagan’s Regional Political Directors and Washington-based conservatives to turn the tide.  In early December 1980, conservative icon Stan Evans convened the coalition under the code name “Inchon”.  Inchon was aptly named as staffing the Reagan era was truly a game changing invasion behind enemy lines.  The combined knowledge and access of the thirty core Inchon members toppled James’ team and opened the door for real Reaganites to staff the Reagan Administration.


Who among the Republican Presidential contenders have similar stalwarts?  In 2012, I participated in the early transition planning for Romney.  His team was awash in Bush alumni.  Washington “retreads” have the connections, and the credentials, to insinuate themselves into a new power circle.  They have the presence to intimidate and dazzle weary campaign staffers with a cacophony of “if you knew what we knew” to dilute ideological zeal with a status quo mindset.


Another challenge for the new President is expanding power beyond their 8,045 appointments.  How do you drive your agenda into each Department, agency, and program?


Which Presidential contender has people who understand how to wield this power and direct real change?  The Reagan transition included a team whose sole mission was to identify the critical power paths within each Department and major Agency.  What twelve positions actually ran the Department of Commerce?  This team identified them and made recommendations for who would be the first wave of occupation.


Another team ran the “welcome wagon”.  This team met with every Secretary-Designate, Agency Head-Designate, and their inner circles, to walk them through “Super Plum”.  They helped develop strategies for establishing full control of their organization and prioritized what Carter regulations and initiatives could immediately be stopped and reversed.


The Reagan Revolution happened by design not by chance.  It happened because legions of loyalists came to Washington to make a difference.  Who among the current Republican Presidential field can deliver real results beyond Election Day?


[Scot Faulkner was Director of Personnel for Reagan-Bush 1980, served in the Office of the President-Elect, and on the White House Staff.  Later, he served as the first Chief Administrative Officer of the U.S. House of Representatives.]
Posted by Scot Faulkner at 11:19 AM