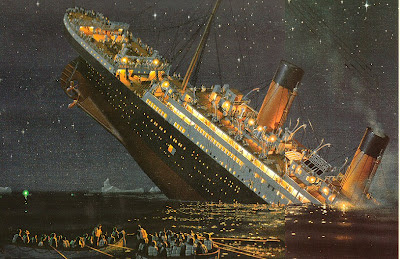 The Federal Government’s “ship of state” found its own way to mark the 100th Anniversary of the Titanic’s sinking.

April started with the bizarre antics of “bureaucrats gone wild” at the General Services Administration (GSA). This was soon eclipsed by the sordid details of the Secret Service and other special security units in Cartagena. Partisan bickering then trumped what had been bipartisan concerns as both sides spared over whether these rogue acts were the tip of the iceberg for the entire Executive Branch and if President Obama was the captain who steered the ship onto this iceberg of waste, fraud and abuse. The final day of the month provided a final bone chilling death to responsibility and accountability in these icy waters – the U.S. Senate announced it would not pass a budget for the third year in a row.

The sinking of America’s faith in the Federal Government was documented by the latest Pew Research Center survey. Only 33 percent had a favorable opinion. This is troubling on several fronts. It is a precipitous drop from nearly 74 percent in 2002. It is also wide spread, with only 27 percent of Independents being favorable and a measly 17 percent across the ideological board thinking the Federal government is careful with the public’s money.

The other epiphany from the Pew survey is that only the Federal Government has sunk under the waves of disrepute. Views of state and local remain relatively constant with favorable scores of 52 and 61 respectively.

This could be a clear case in favor of Federalism, localism, and the Tenth Amendment. It is also a clear case that there is something fundamentally wrong in Washington, DC. The cause of this disconnect goes far beyond partisanship. At its heart is how to make the workings of the Federal government accountable in a meaningful way. How can citizens break through the bureaucratic trenches to know what is really going on and do something about it?

One attempt at breeching Washington’s fortifications is the Digital Accountability and Transparency Act (DATA Act). This Act requires federal agencies to report spending information on a searchable Web platform. However, the operative term is report. It is a management maxim that the moment you stop what you are doing to report what you are doing the data degrades in both timeliness and accuracy. That is why corporations have invested in real-time information capture for decades. Corporations have built massive live databases to the magnitude of petabytes and exabytes to discover consumer trends, guide their supply and distribution chains, and track dollars down to the penny and the nanosecond.

The Federal Government wants to keep away from real time anything. Time lags are the allies of parsing, spinning, and obfuscating. Yet, the only way to finally and fully solve what ails the Federal Government is a requirement that every penny spent (minus clearly defined covert accounts) should be maintained in standardized live databases, complying with Generally Accepted Accounting Principles (GAAP), open the public, and searchable at all times.

This sounds like a quest for a fiscally accountable Holy Grail, but it can happen in the Federal Government, because it has happened.

In 1983, GSA Administrator Gerald Carmen wanted to institutionalize the operational integrity of the agency. His vehicle was to base the agency’s annual report on the SEC’s 10-K report, a document required from publicly held corporations. The GSA is the most financially complex agency in the federal government with its maze of reimbursable accounts, revolving funds, and capital funds overlaying massive account receivables and payables. The inventory of assets is also daunting, especially the evaluation and depreciation of all the non-Defense capital assets and inventories of the executive branch. There is also consolidating statements on each Cabinet Department and Agency and the National Defense Stockpile.

The GSA’s 10-K took a small GSA team less than four months to complete. I was part of that 10-K team. The report was unprecedented in providing a tangible example of how the real world could replace the fantasy world of federal accounting. The GSA’s Fiscal 1983 10-K was made public and was immediately ignored. No one wanted to see real accountability spread throughout the Executive branch – even one run by conservative Republicans under Ronald Reagan.

In 1995, as Chief Administrative Officer of the U.S. House of Representatives, I resurrected Carmen’s financial reporting crusade. In the early information age, an annual 10-K report could become a monthly or even a weekly release drawn from live financial databases commonly used in the private sector. By June 1996, it was done, thanks to an amazing team of CPAs and data management experts. It went live for 24 hours with CSPAN and other news outlets cheering its existence. Plans for a nonpartisan editorial board, ranging from Common Cause to Americans for Tax Reform, writing explanatory notes were underway. Republican leaders of the House charged into my office demanding it all be eradicated. Even conservative Republicans under Newt Gingrich felt this display of public information was “too public”.

Now in 2012, we have the DATA Act. It is a useful step in the right direction, but it falls far short of the disclosure revolution needed to refloat the federal ship of state. How many collisions with scandalous icebergs need to occur before a real solution is embraced?
Posted by Scot Faulkner at 10:20 AM