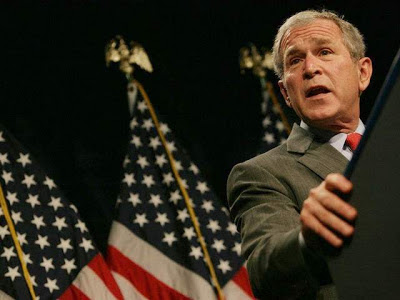 This was published in The Washington Times
http://www.washingtontimes.com/news/2008/jun/03/opinion-republicans-in-freefall/

Things could not be bleaker for the Republican Party. Its fund raising fell apart over a year ago as a backlash to immigration reform. Regularly, President Bush sets new record lows for how much a modern president can be disliked and how completely his policies can be rejected. Three special election defeats in Republican strongholds are proving that there will be no safe-havens in November. The latest polls show voters preferring Democrats over Republicans by a margin of 53 percent to 32 percent. This is nearly twice the deficit the Republicans faced going into the disastrous 2006 elections.

This is a portrait of a party in freefall, yet many Republicans remain in denial. They grasp at straws about America’s racial undercurrents and the Democratic Party’s uncanny ability to lose elections. These retreats into fantasy will not prevent the tsunami that is heading toward the party on Nov. 4.

Republicans I speak with are just as fed up with their party as Americans in general. The Republican Party seems like a random collection of egos and personal agendas. Many of these personal agendas have embraced Big Government and Big Brother with more zeal than the most ardent leftist. They see dispensing favors and funds as their ticket to electoral bliss. They ignore the epic failures of the Bush presidency, and those of the recent Republican era in Congress, in the hopes that Americans will somehow do the same.

The Republicans have a razor-thin window of opportunity before all is lost. The November elections are just over five months away. Voters want something real, and their skepticism and cynicism are reaching record levels. They know the campaign calendar dictates that everything said by a politician is suspect from now through the election. Candidates from across the political spectrum prove this during every campaign cycle when they say anything, including fabricate and outright lie, in order to dupe voters into supporting them. Voters want to see real actions that back up the words.

The Republicans can still do something that could save them. They could treat the Bush administration like it was the opposition party. Can you honestly envision Republican members of Congress, as well as their pundits and activists, letting Barack Obama or Hillary Clinton get away with the corruption, incompetence, waste and abuse regularly displayed during the last seven years by the Bush administration? Of course not. Republicans would have scrambled to the microphones attacking every moment of the administration and hauling every official they could before their oversight committees.

The strategic error made by Republicans is that they began looking at everything through a partisan lens. If a Democrat does it - it is fundamentally bad. If Mr. Bush or another Republican does the exact same thing - it is fundamentally good. Most Democrats suffer from this same myopia, but they are not the ones perceived to be in power. Oversight hearings and spirited attacks by Rep. Henry Waxman and others are viewed as holding our government accountable. Republican efforts to hamper these actions are rightly viewed as a conspiracy to shield the Bush Administration from accountability.

This is a no-win situation for Republicans. Their only hope is to begin exposing the foibles of the Bush administration with even more zeal than Mr. Waxman and his Democratic colleagues. This should be easy for a real Republican or real conservative. There is very little worth preserving from the last seven years. Except for some excellent appointments to the federal courts, Bush and his acolytes have been the antithesis of Ronald Reagan and Barry Goldwater on everything that matters. The sooner their legacy is erased the better for the Republican Party.

The Republicans can start their return from the dead by returning to their roots - displaying a healthy skepticism of Big Government and fighting government waste. Waste is waste and corruption is corruption, no matter which party is in charge. Republicans must recover their moral compass.

Members of Congress should begin their resurrection by aggressively conducting investigations and oversight of waste and mismanagement in the federal government. In recent weeks, $7.8 billion was reported spent in Iraq without adequate documentation. There are reports of highly unethical and possibly illegal procurement and contracting actions at the Department of Housing and Urban Development. The Coast Guard is not adequately investigating and preventing marine accidents. The list of improvement opportunities is endless. Criticizing these, and other examples of mismanagement, is a good first step for the Republicans in Congress to show some real concern about government integrity. Republican journalists should also be aggressively pursuing and reporting on incompetence and wrongdoing in every other nook and cranny of the current administration.

The Republican Party must take this kind of substantive action if it wants to convince voters that it is mending its ways. With the August recess, national conventions, Olympics and probably an early adjournment, there are only a few precious weeks left for the Republicans in Congress to avoid electoral oblivion.
Posted by Scot Faulkner at 3:47 PM