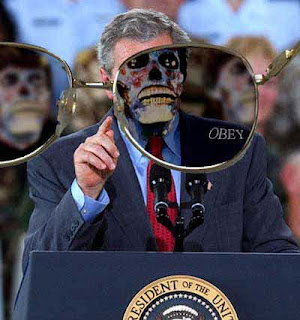 The image in Vice President Cheney’s glasses ignited some wonderful speculation across the “blogosphere”. One of the more inspired takes was linking the image to John Carpenter’s 1988 film “They Live”: http://gawker.com/378357/cheneys-glasses-reflect-terrifying-truth

In that film, an out of work construction worker finds a pair of glasses that unmasks the space aliens among us. As the campaign season continues a number of things are happening that are unmasking the truth about candidates and the media.

Obama’s remarks about rural people embracing guns and religion out of bitterness has shown him holding the same contempt for real America as most liberal politicians. For him to demean people exercising their rights under the first and second amendments of the U.S. Constitution is truly unnerving. He and his surrogates are focusing on the “bitter” portion of the remark, but they have already been unmasked.

Obama’s lofty statements about embracing diversity are just campaign rhetoric. He is willing to pander to Americans in the “flyover” sections of our country to get their votes. Once in office, he will revert to form and listen to the usual liberal elite and the Washington power brokers. So much for change...

A CNN reporter apologized for fixating on Obama’s “bitter” remark and the misstatements of the Clintons, exclaiming, “we just have nothing new to talk about until April 22”.

Excuse me. Admitting that the news media has to wait until the next primary election to find something “important” to report is appalling. We have three people running for President. The media should be aggressively probing every aspect of their policies, their inner circle, and their record. This long hiatus between primaries offers an ideal opportunity for the media to provide real insight into who will be our next leader. Instead, the talking heads are adrift. It is time for these news outlets to fire their multimillion “talent” and find some real news reporters.

The final unmasking occurred at a local Republican Lincoln Day Dinner. Lincoln was born on February 12, 1809, but local GOP party organizations across the nation hold their tributes when speakers or good weather are available.

This Lincoln dinner was held in a fire hall and had all the trappings of grassroots politics. Then the program began. A long line of candidates from Governor to local tax assessor came to the microphone to plead their case for contributions and votes. Even accounting for the neophytes, it was a deeply disturbing showcase of what is wrong with today’s politics.

Several candidates actually thought it was Lincoln’s birthday, showing their basic ignorance of our history. Others spoke about national issues, although they were running for a local office, showing their basic misunderstanding of the job to which they aspired. Many cited their only credentials as having lived all their lives in the area or having a loving spouse. One undercut this credential when he had to look down at his written remarks to read, “I could not be here without recognizing my loving wife”. He also had to peer down at his written speech when he later stated, “I am a lifelong Republican”. My skin crawled.

Then various incumbent legislators stood at the podium. They ignored the 150+ audience in order to banter with their colleagues sitting nearby. They must have thought they were the new “rat pack” and that the audience just came to watch their interplay. The inherent insincerity among legislators made the spectacle even more obtuse. Maybe I have been involved in politics too long. When I was younger such events left me energized, this one left me depressed. Or maybe politicians are just getting sloppier with their deceptions.
Posted by Scot Faulkner at 2:35 PM