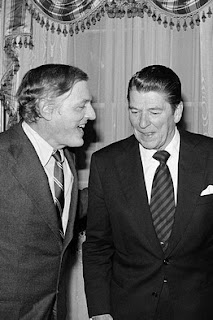 I only met William F. Buckley once. That was during the fortieth anniversary reception for National Review in 1995. I shook his hand and thanked him for reshaping America.

Mr. Buckley was the Thomas Paine of 20th Century conservatism. He gave the isolated pockets of conservative thought and activism a central identity. In an era before the Internet and cable television, his show “Firing Line” and his magazine “National Review” reminded conservatives that they were not alone and that their philosophy was both noble and ascendant.

The campaigns of Barry Goldwater and Ronald Reagan would not have been possible without William F. Buckley. They would have still run, but they would not have had the ability to so immediately and effectively tap the grassroots wellsprings of conservatism. The revolution within the Republican Party in 1964 and the revolution in America in 1980 were his progeny.

I pay homage to William F. Buckley on page 74 in my book, “Naked Emperors”. For me, and millions of other young conservatives, Buckley was more than a great writer and more than an icon of our movement. He rose to the level of being an “Epiphany Person.”

An “Epiphany Person” is someone who guides us to a profound understanding of life itself. These encounters are epochal moments, as uplifting and all encompassing as the light entering the cave described in Plato’s “Republic”:

“At first, when any of them is liberated and compelled suddenly to stand up and turn his neck round and walk and look towards the light, he will suffer sharp pains; the glare will distress him, and he will be unable to see the realities of which in his former state he had seen the shadows; and then conceive some one saying to him, that what he saw before was an illusion, but that now, when he is approaching nearer to being and his eye is turned towards more real existence, he has a clearer vision.”

Buckley’s insights, commentary, and humor gave us lessons about philosophy, public policy, and life that we took with us wherever we went. For many of us, his words propelled us to elective and appointive office and shaped our actions and deeds while in those offices. Buckley’s words and thoughts continue to guide us through new encounters and experiences in the 21st Century.

William F. Buckley was the “indispensable man” of our time. I, like every other conservative, will be forever in his debt.
Posted by Scot Faulkner at 11:00 PM